Routes in Redgarden - Tower One

Psychosis is on the W/SW face of Redgarden Wall, and thus it gets morning shade and afternoon sun. The route begins from the same ledge as The Yellow Spur and Vertigo, and is more or less half way between the direct starts of these two routes.

Go up the Redgarden Wall trail from the Streamside trail until a metal ladder takes you up just beside the large boulder against the wall. The dihedral just above the ladder on the wall, behind the boulder, is Schizophrenia.

Schizophrenia is a 5.8** approach pitch to Psychosis and will deposit you more or less at the base of the route.

If you do not want to climb Schizophrenia, continue up several switch-backs until a broad ledge appears as for the approach The Yellow Spur. Cut back S/SW on this ledge at the base of the rock to an impressive looking evergreen (Douglas fir). Just down and right of the tree is a weakness in the large roof, some 15' or so from the ledge.

P1. Climb up and over this roof on small but positive holds with poor protection (10a/b, S). This is essentially a mantel move with one high reach. Short climbers will find this more difficult than those who are tall. After that sequence, some gear can be had here and there for the rest of the way up, the now more moderate pitch. A belay is reached soon, as this is a fairly short pitch.

P2. Climb up and left to a junky and nondescript, right-facing dihedral to a ledge, which can afford a belay, the position of which will depend on how you will do the 3rd pitch, so that is where the belay is described. Better yet, don't do this pitch at all and instead do the 2nd pitch of 3 Old Farts Young At Heart (10d) which adds challenge and quality to the line.

P2a. Climb up directly above the belay on P1 through a crack. This crack splits a short dark section of rock which passes through a small roof (crux, 10d). This pitch consists of good rock with good gear.

P3. The standard finish of Psychosis. From the top of P2 ledge, move up and left on the ledge, then up again to a good stance to belay. From the belay, traverse down and right (5.10d) to a 5.10a handcrack, which goes to the op of the wall and deposits the climbing party on the top of the upper ramp. Some people find the traverse frightening due to its position and lack of gear.

P3a. The better finish of Psychosis. From the top of P2, arrange the belay as if directly above P2a. There is an enormous overhanging wall which a handcrack and pockets galore directly above you. Climb it (5.11a) until the angle eases off to where the standard finish merges with the crack at the end of its traverse. Continue to the top on the handcrack (5.10a). There is a little questionable rock on the overhang, but the holds for the climb and the crack are good and take good gear; it is better and probably safer than the standard finish, although harder.

From the top of the route, some length and quality can be added by finishing your day on Italian Arete or Body Tremors.

The protection in some places leaves a little to be desired. Take a standard Eldo Rack and make sure you have small gear with you. Some of the runouts can be avoided by taking the harder alternate pitches of "3 Old Farts..." and the 5.11 finish instead of the 5.10 finish. 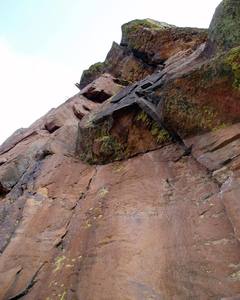 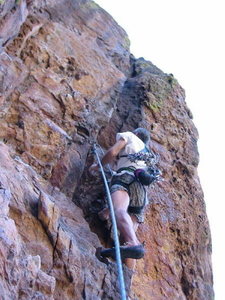 Bill Briggs at the start of the direct start to… 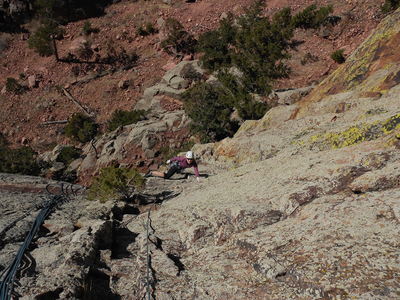 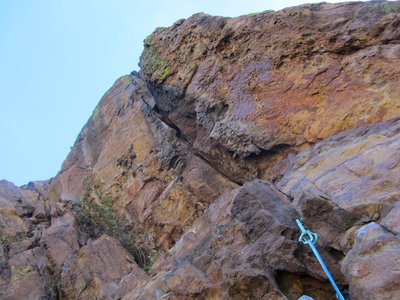 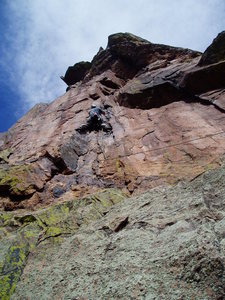 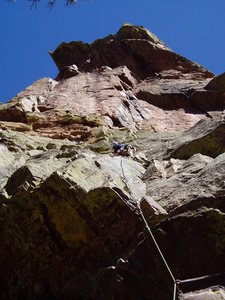 Luke on the slab on P1. The route goes right fr… 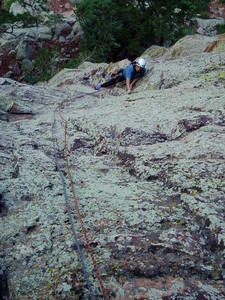 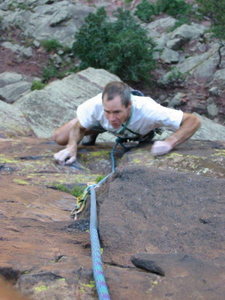 Bill Briggs near the top of the Old Farts secon… 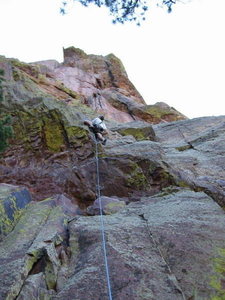 Bill Briggs just over the roof on the first pitch.