Routes in Redgarden - Tower One

Art's Spar connects the Lower Ramp to the Upper Ramp to the left of Ruper and via several means. As a variation to the Grand Giraffe, Art's Spar makes a largely fun link up that catches the roof that was actually dodged by the Grand Giraffe. I will add a story to this description because it must rank as one of the all time classic epics that should have ended in disaster, but instead saved the life of it's chief protagonist.

Begin Art's Spar at the top of the Lower Ramp as you would for Ruper. Following the Grand Giraffe, a pitch of 5.8 followed by a pitch of 5.4 takes you to the belay below the roof; stay in the 5.9 corner for the Giraffe or cut right and over the roof for Art's Spar. On the Upper Ramp, one has any of numerous choices to finish the headwall and catch the East Slabs. And this is a great route.

Now, I may burn in hell for telling this story, but it is too good not to tell. Fifteen years ago in September I did Art's Spar with a super athlete/climber who I will call DK to preserve my own hide. DK, as most masculine hunks, had hugely more balls than brains, although he did survive this epic so he must have had some sense of self-preservation - or luck.

We hit the Lower Ramp with just over one hour of sunlight remaining, and waltzed up the first two pitches to the Grand Giraffe belay below the roof at Art's Spar at approximately sunset. DK led the roof in classic, flawless style, but this took 45 minutes, which amounted to 45 min after the sun had set - dark in other words. Thinking of the exit off the Upper Ramp, the East Slabs, and the enclosing darkness, I suggested to DK that he rap back down to my belay from which we would descend via raps to the Lower Ramp and then rap this to the West. Agreed, he set up a rap and started down. Now, bear in mind that the roof is 300 ft off the deck. About 6 or 7 ft from the lip, DK stalled out and stopped his rappel. I inquired as his status and the progress of his rappel, to which I received a series of garbled grunts in response. After close to 10 minutes, perched above the Art's Spar roof, DK emitted a single sharp curse, SHIT!! In the silence that ensued, I heard the three notes that have burned themselves into my memory, perhaps forever: "PING!! Ping! ping...." "DK", I inquired with feigned calm ,"what was that?" .... "I just dropped my figure 8", he responded. In other words, while rappelling with the figure 8, DK managed to drop the very same device with which he was rappelling. Nifty.

At that time I was wagering to myself at close to 5% chance of DK living through this evolving epic, perhaps a bit less, but since it was DK I would go with 5%. However, with a little school boy hand-over-hand rope climbing, DK did manage to get close enough to the belay for me to get a rope wrapped around his legs, then his waist, and get him back to the belay to continue our pleasant outing, which we did, under the cover of darkness. This was the last day that DK climbed. He even survived to marry the most beautiful woman in the universe; now both are happy.

Bring a full rack and a standard 50 or 60 m rope. Plan on descending via the East slabs, unless you want to hassle with the raps off T1 (a bad idea). 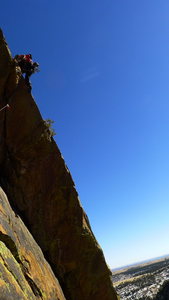 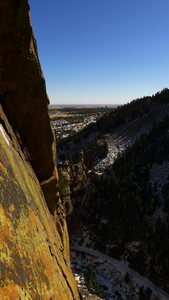 Believe it or not, this is 2 days after we got… 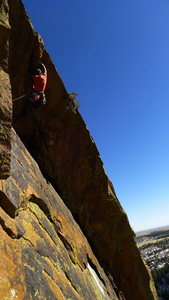 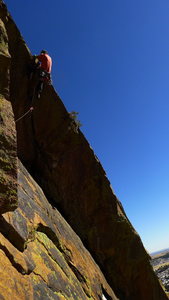 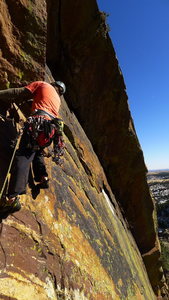 Matt starting off the delicate footwork where A… 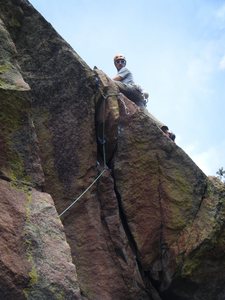 Matt above the crux after a good onsight. 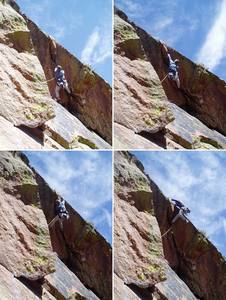 Dave hadn't done the roof since the hold broke… 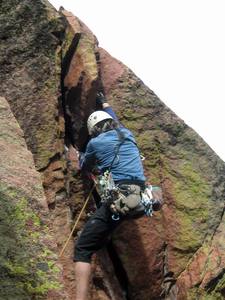 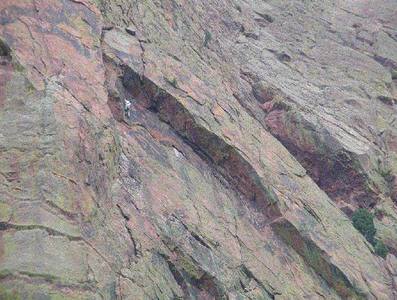