Routes in a1. The Uberfall - left

next area: Uberfall - right side

Major Features: The Uberfall is the first section of rock you encounter as you walk north from the steel bridge that separates the Trapps from the Nears. On most in-season weekend days, a Preserve ranger is parked at the Uberfall, and it's a very social area.

Lest you think the Uberfall is named for the trickle (or, in season, the pouring) of water that descends down the escarpment here, Dick Williams wrote in his 1991 guide: The Uberfall acquired its name, according to Fritz Weissner in a 1960 Appalachia article, from 'the method used in the descent of letting oneself, with outstretched arms, fall across the four-foot gap between the massif and a huge block (Susie A) above the road'.

For our purposes, routes in this section include the beginning of the cliff -- the big whitish face you pass closest to, just where the carriage road takes a slight turn, is Katzenjammer. You'll pass the Gerdie block, walk under the giant Horseman roof. The two routes on the face right of the Horseman roof are the last in this section, Apoplexy and Coronary, just before the Laurel block.

Just below the carriage road across from Nosedive is another big block -- the Mental Block. It contains one of the Gunks' true crack lines, Sonja, and several other harder cracks, which face the road.  Those routes are listed under "Unsorted" in the route list here.

Approach: Most Uberfall routes start almost directly from the carriage road. A trail runs along the cliff between The Brat and the Gerdie Block.

Descents Many routes now have bolted anchors but walking off is still required for other routes. Closer to the very beginning, you'll be able to walk back and scramble down behind the cliff. It's a good idea to familiarize yourself with the Uberfall Descent, which provides the walkoff for the majority of Uberfall routes as well as many beyond it.

Mountain Project's determination of the classic, most popular, highest rated climbing routes in this area.
More Classic Climbs in The Uberfall - left » 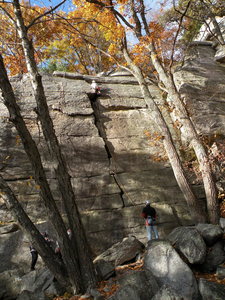 Nearing the top of Boston 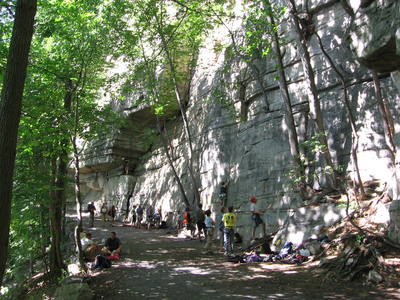 The Uberfall on a typical summer day. 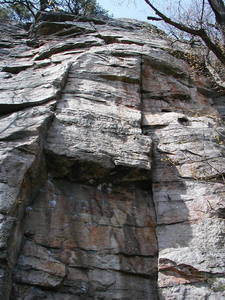 Nosedive on the right, Retribution on the left.… 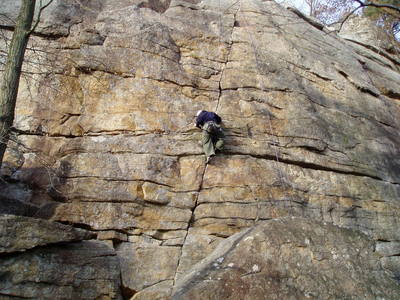 Ken's Crack on a cold day. 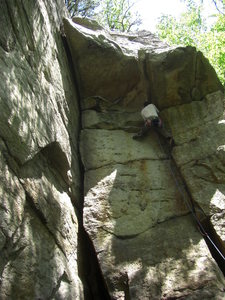 CC Route is the crack on the left. Note: the c… 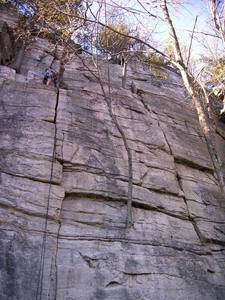 Laurel is the left crack with climber at the an… 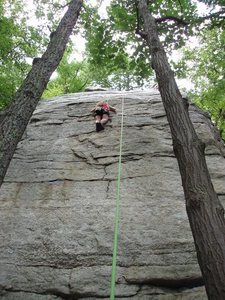 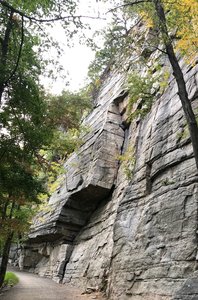 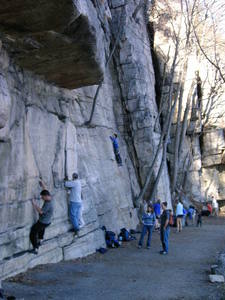 All Photos Within The Uberfall - left


More About The Uberfall - left