Routes in Battle of the Bulge Buttress

2022 Raptor Avoidance Areas-Lifted August 19, 2022. All walls are reopened to climbing.

Each spring raptors return to the Indian Creek area for nesting. Eagles, falcons, hawks, and other migratory birds use shallow depressions on ledges, cliffs and rock walls to build nests, often returning to the same site year after year to raise their young. The Bureau of Land Management (BLM) requests that visitors and recreationists avoid these areas during critical nesting periods which typically start in early March and last through late August. Avoiding recreational activity in the vicinity of the nest sites along and maintaining a safe viewing distance will help ensure survival of young birds.

Beginning March 1, the public will be asked to avoid activities in areas that the BLM has identified as having high potential or are historically known to have raptor nesting activity. Areas that have potential nesting activity are referred to in many climbing guidebooks as: The Wall, Far Side, The Meat Walls, Cliffs of Insanity, Public Service Wall, Disappointment Cliffs, Fin Wall, Broken Tooth, Cat Wall, Slug Wall, and Reservoir Wall. This list serves only as a guide and does not indicate every avoidance area or encompass all known names of the affected climbing areas. Please refer to the provided “Raptor Protection Map” to identify avoidance areas for the protection of the nesting sites. The BLM is coordinating these raptor protection efforts with the Utah School and Institutional Trust Lands Administration (SITLA), who is the administrator of the climbing areas known as Disappointment Cliffs and portions of the Second Meat Wall climbing area.

In March, BLM biologists will begin the annual surveys of raptor activity to verify which historic nest sites are being used. Typically, by late April or early May, biologists can identify the nesting areas the raptors have selected. At that time the areas without active nests will be cleared for recreational use. The BLM requests that climbers, campers, and hikers completely avoid areas with active nests until the young birds have fledged, which is usually by late summer. Biologists will monitor nesting activity throughout the season and keep the recreation community informed of potential changes. Avoidance area notices and maps will be posted throughout the Indian Creek Corridor during the recreation season.

While falcons and eagles are not overly common sights in southeastern Utah, they are present throughout the area and keen-eyed observers are sometimes rewarded with their aerial acrobatics. Visitors can watch adult birds hunt or observe the antics of young raptors perfecting their flying techniques. These species in Utah continue to recover from low population levels, thanks in part to cooperation from the public, climbing communities and governmental partners. The BLM would like to remind the public there are private land holdings throughout the Indian Creek Corridor. Please respect private landowners’ boundaries and signage.

For questions about this avoidance areas, raptors, and migratory bird habitat in the Monticello area, please contact Melissa Wardle or Jason Byrd with the BLM Monticello Field Office at 435-587-1500. Persons who use a telecommunications device for the deaf (TTY) may call 711 to leave a message or question. The TTY Relay System is available 24 hours a day, seven days a week. Replies are provided during normal business hours.

Great thin hands crack route hidden behind a large block leaning against the cliff a hundred yards or so left of Battle of the Bulge. Work your feet as you jam up into the darkness, safe with the knowledge that you will indeed find a bolt anchor up there. Look around, a little creativity can aid in the struggle. Be careful when pulling the rope, or the crack will eat it. Bump this two star route up to three on a hot day. 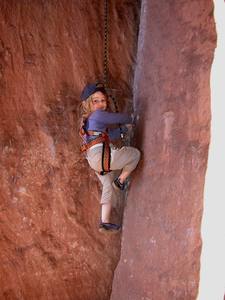 I loved this climb, My feet fit in perfectly.… 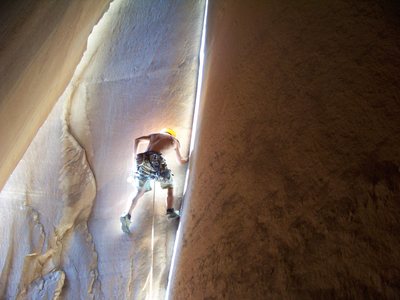 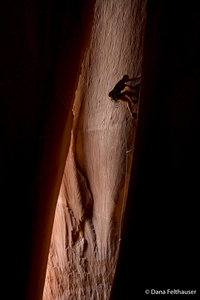 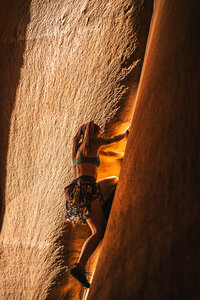 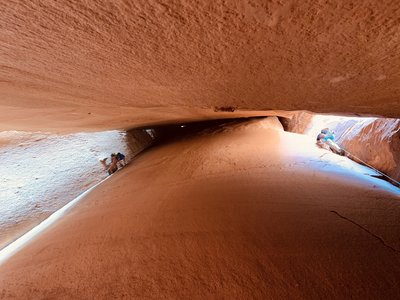 Xue on Cave Route on the left, Shuojing on Man… 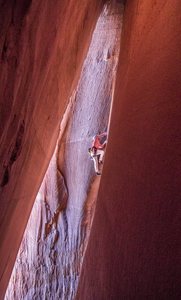 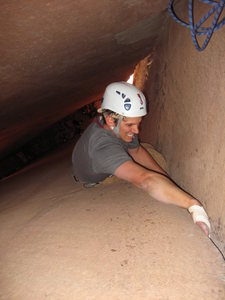 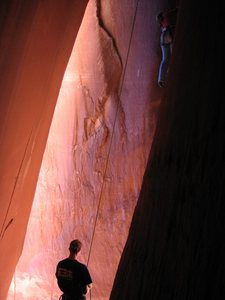 On a downright hot november day, this route was… 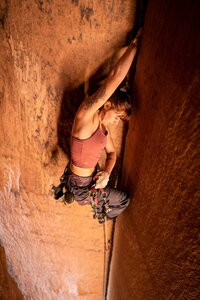 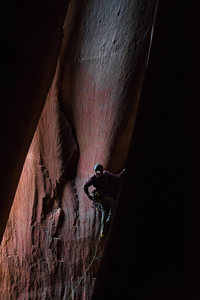 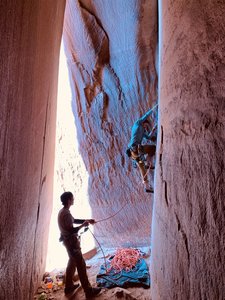 Steven getting started on Cave Route with Yuan… 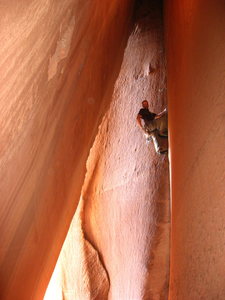