Whatever Happens...Happens (aka. Watermelon Wishes and 40oz dreams)

Access Issue: Do not camp on the land below and west of the crag. It is private property and is now posted. Details

Continue down the road about another mile toward the double camelback formation near Gunlock. This is BLM owned land, and offers parking and dispersed camping where you won't be the guy to get the Prophesy closed to climbing.

{Perin's great sport description} Climb large, varnished edges on mostly less-than-vertical terrain. Two short sections of vertical or slightly overhanging rock keep things interesting. The crux is between the penultimate and last bolts. After the last bolt bear right to the anchors above the roof/arch. Rappel off or continue up the second pitch of The Roofs of Jericho.

There is one perfect hand jam, and a couple of places for tight hands jams. Some of the holds are intricately shaped and look somewhat delicate.

Note that Rock Climbs of Southwest Utah lists this route as 90 feet long. However, when I reached the chains I was about two feet short of the half mark on a 70 meter rope, which would indicate about 110 feet (allowing for the knot). Note that the rappel line is well to the right of the route line and ends on higher ground than the start of the route. There appeared to be sufficient rope remaining in the 70 meter to indicate that a 60 meter rope would work also for the rappel. {end Perin's great description}

Sadly this route was bolted over after an all gear FA was made in 1996. The name the retrobolters gave it reflects their true ethics of the crag, which is sadly overbolted.
If you have a rack and want to climb it w/out clipping bolts (it's the exact same line) bring many small and medium sized cams along with the standard rack up to #4 camalot. Small nutz & slings were helpful as well.

I do remember the start being a bit spicey, with a slung chickenhead or 2 then we(Pete VanSlooten and I)climbed to and belayed from the same ledge as Roofs of Jericho, but used gear for the belay (bolts now grace this ledge). We then climbed up and left following a chimney finishing on low angle patinas/crack system. Walkoff around the back heading north then wrap around to the base of the wall (south).

There is a light-colored, smoother-looking area right about the middle of Prophesy Wall. This route starts on the vertical bulge (not quite a pillar) that delimits the left side of the smoother-looking area. This is the second line of bolts to the left of the smoother area The first line ot bolts is the route Equanimity (which had its anchor about 60 feet up). The third line (to the left) is Ship of Fools, which has a 3-chain rap anchor about 60 feet up.

12 bolts, hangers-and-chain anchor. Note that Rock Climbs of Southwest Utah lists 11 bolts. The first bolt is low and kind of useless; like the rest of them...... perhaps it was added later.

Gear: Doubles on everything to #2 Camalot. Singles on #3 & #4 Camalot. A triple set up to #.75 Camalot is very nice. Full set of nuts w/ focus on smaller sizes, slings helpful. 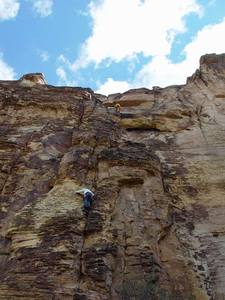 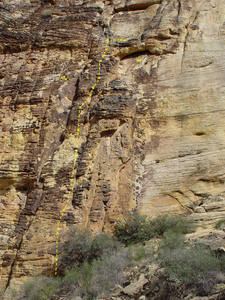 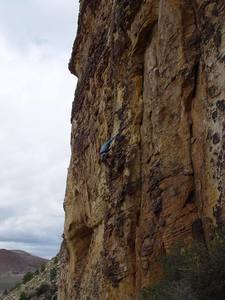 Whatever Happens...Happens on a cool October day.

More About Whatever Happens...Happens (aka. Watermelon Wishes and 40oz dreams)