To Bolt Or Not To Be

Routes in (k) The Dihedrals

Among the most famous routes in the world, this legendary wall of relentless edges played a seminal role in the consolidiation of Sport Climbing in the US. As the first 5.14a in North America, this route's haughty grade focused national attention on local tactics, while luring the world's elite free-climbers to an unknown backwater rest-stop in rural Oregon. Perhaps more than any other route of the era, To Bolt demonstrated the unique benefits of the "top-down" approach. If nothing else, surely this was a route worth hang-dogging for.

For more than 20 years, hardmen from around the world have tangled with To Bolt's tiny crimps since French patron "JB" Tribout first freed the line in late 1986. Alan Watts, the Father of American Sport Climbing, once posited that virtually every elite climber of the last 20 years had attempted the line, or had at least contemplated it, and thought better of it. Scott Franklin, Jerrry Moffat, Ron Kauk, Alan Watts, Doug Englekirk, Steve Schneider, Lynn Hill, Chris Sharma, Dave Graham, Tommy Caldwell, Beth Rodden, Sonny Trotter, Steve McClure...the list of folks who've ticked this wall reads like a Who's Who of free climbing.

In addition to its intriguing history, unparalleled movement, flawless golden tuff and an awe-inspiring appearance warrant the line's ultra-classic status.

For the redpoint climber, To Bolt offers countless challenges. With so many difficult moves, numerous factors must come together for the send. Weather, shoes, fitness, skin, where & when to rest, and how to clip--all these come into play. The route is perhaps as much a psychological challenge as a physical one, with the redpoint crux coming down to the climber's ability to keep focus over the last five bolts of relatively easier stone, and suppress the leg-rattling notion that the send is in the bag.

The route begins tamely enough, with 3 bolts of fairly mellow 5.12- liebacking up a series of left-facing sidepulls. There is a difficult left-hand mono move below the first bolt, and an easy sinker mono for the right-hand at the 3rd bolt. The first difficult clip comes at the fourth bolt, just before the first crux, a 5.12 rightward traverse on sharp, purple crimps and un-inspiring foot divots. Opposing sidepulls and high-steps lead to a 1/4" polished crimp and the tenuous fifth clip. The real business comes in the next few bolts. For crux #2, gaston up and left to a series of 5.13- deadpoints to thin, sharp crimps and a core intensive clipping stance. Clip #6, chalk up and kiss your skin goodbye as you tickle the 1/8" crimps of the next 5.13 crux. Moving from 6 to 7 is the hardest bit of climbing, and it comes with a considerable pump, but good balance is the key to reaching the sickle-shaped sidepull and an extremely insecure clipping stance. A brief shake & chalk is possible here, before continuing thru crux #4 via sequential 5.12-ish footwork & hip shifting. Clip the 8th bolt with ease, then a series of super-high-steps and long lockoffs lead to the ninth bolt and the first real rest: a rounded 1" crimp with decent feet.

After a good shake, beta-intensive 5.13- crux #5 heads up and left on rounded crimps and long cranks, to a slopey pod rest at the tenth bolt. From here to the chains is considered 5.12d, but should not be underestimated, as there are many heart-breaking moves in the last 5 bolts. A few moderate moves lead to a large bear-hug flake at the 11th bolt, and one final shake before the last 5.12/13- crux. Delicate footwork and tiny crimps work up & left to the "crescent-shaped" hold, an awkward clip and one last hard crank to a series of horizontal crack pods. From here, things ease somewhat as the pump builds. Long sequential lockoffs between bigger holds with better feet keep things moving chain-ward, but don't allow for any real "Thank-God" rest. After clipping 14, an awkward & balancey step left leads to an ascending leftward traverse, crossing delicately to large slopey pockets and a bomber clipping jug on the arete.

On the dihedral face left of Sunshine Dihedral, beginning atop a pointy boulder.

14 Bolts. Originally, the route continued around the arete up the 5.4 slab to the anchor atop the 2nd ptich of Moondance. A chain anchor has since been added on the face for convenience. A full 70m rope just barely makes it to the ground from this anchor with much care. The hillside slopes away, so you will need to swing in towards your belayer (or stay clipped to the belayer's end of the rope) to reach the ground. 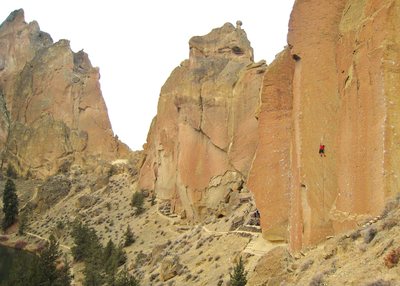 The crux of To Bolt Or Not To Be

To Bolt Or Not To Be 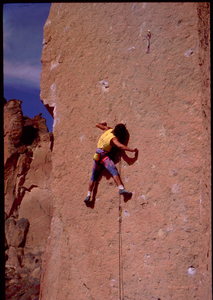 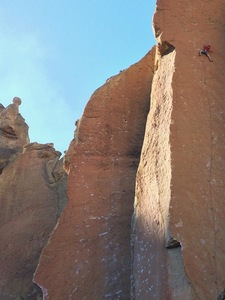 Adam Ondra on his Smith Rock rampage (except fo… 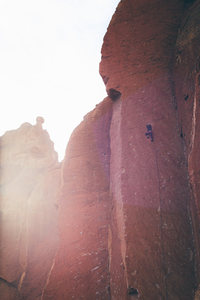 Unknown Climber on To Bolt Or Not To Be. Taken… 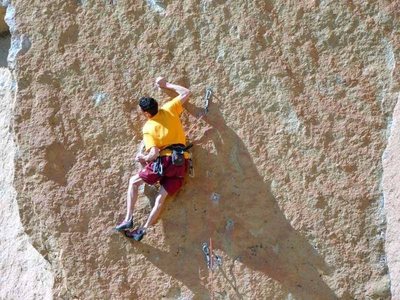 Ian on To Bolt the day after his redpoint. 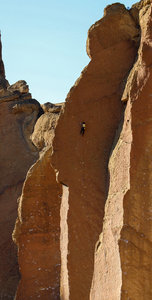 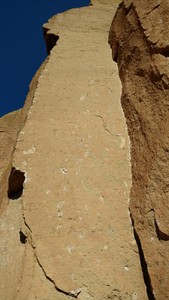 From the 1st bolt

More About To Bolt Or Not To Be