This route is the standard finish to climbs on the right side of the Book, (though not as good as the harder finishes to its left), and could be accessed from climbs such as Osiris and George's Tree by traversing right along Fang Ledge. I thought it would be good to add it because most of the other routes for this rock make reference to it.

The Book is 500-600 feet high and has a prominent lower-angled section about 2/3 of the way up across much of its width. Near the right edge of the book, this easy slab terminates beneath a steep headwall, with a small cave at its right. Down and right from the cave is a prominent roof band, and much of the rock above it has a reddish tint.

The cave is the easiest way off for most climbs on the right side of the Book. It offers two major 5.7-5.8ish variations.

From just below it, one can boulder out the roof, which is much easier than it looks (involving slyness and contortions). There may be a fixed pin and other decent gear can be had; finish up a groove. A more straightforward finish lies just to the right (definitely the recommended one if speed is an issue at all, otherwise over the roof is quite fun). Hand traverse around an overhang utilizing a horizontal crack with good medium-small Friend placements, and finish straight up easier rock. Watch rope drag on either exit. The right end of the hand traverse can also be reached directly by climbing a thin 5.9 crack with tricky placements.

Descend by downclimbing a short way, then follow a ledge east, and pick up a water groove which leads to a series of slabs, chimneys, and grooves. One can also rappel from a tree at the beginning of the ledge to reach this point (recommended in wet or dark). Bear south east (easier but longer) or south west (4th class, with a few cairns--be sure to cut back east partway down or you'll get cliffed). Walk west back to the base of your route.

A very short pitch--you'll need a few nuts and Friends for the easier variations (nothing big), and be sure to bring some very small nuts and TCUs if doing the 5.9. 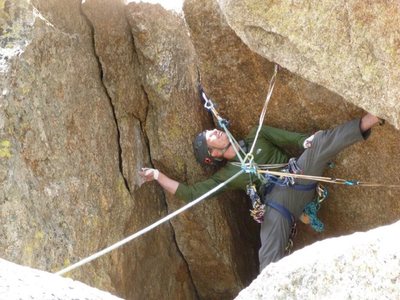 A tangled mess I lead. 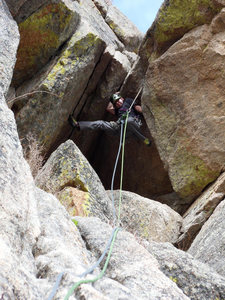 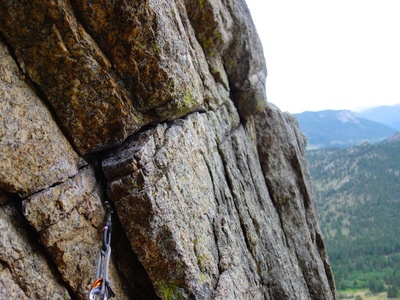 The Hurley Traverse (5.7) option out of the cav… 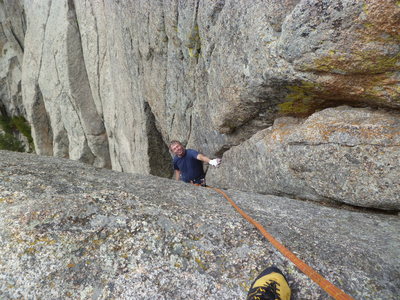 All smiles after exiting the Cave. 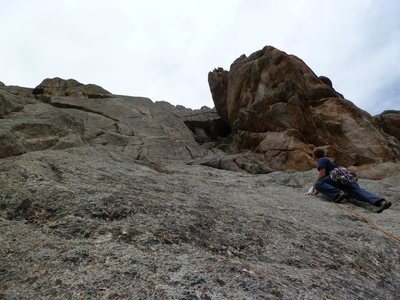 Looking up at the Cave. 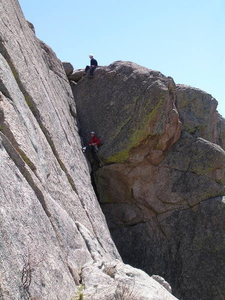 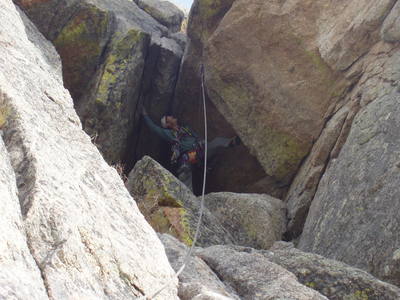 Errett trying to figure this one out.

More About The Cave Exit