Looking for an Alaskan-style adventure but your boss won't let you take the time off? Alaskarado offers a little taste of the big mountains a little closer to home. The route follows the southwest-facing gully between the Sharkstooth and the Petit Grepon, ending at The Gash. To access the climb, kick steps up an approach gully just left of the south face of the Petit Grepon.

P1: climb any of several options to gain a bench about a half rope-length above. We chose the left most option as it looked easiest, but it turned out to have a heady M6 R crux at the end. Future parties may want to experiment with other options (100 feet, M6 R, though there's a pretty good chance an easier option exists to the left).

P2: kick steps and simul-climb up steep snow past one rock band. After a while, the gully will narrow and steepen for some more difficult climbing past a chockstone (300 feet, M5).

P3: battle a snow mushroom and execute a crawl move around the left side of a chockstone (150 feet, M4).

At this point, you can continue to the summit of The Sharkstooth, descend The Gash, or rappel the route. 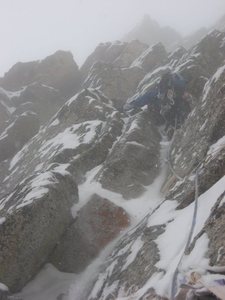 Chris Sheridan in the east gully of The Sharkst… 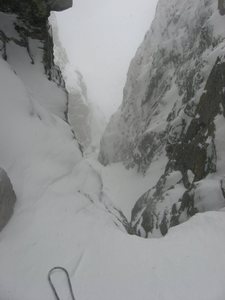 Looking down the upper part of Alaskarado. Pho… 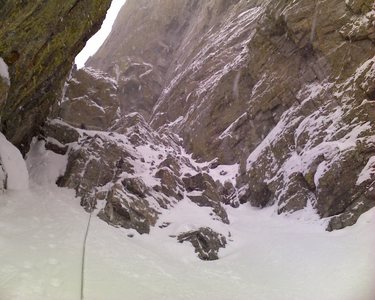 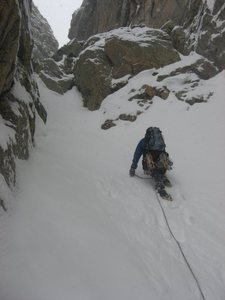