This route follows a prominent gully on the north side of Powell Peak. The first half of the gully consists of easy snow while the second half contains a few rock sections of more interesting climbing. Overall the climb is similar in nature to the Hourglass Couloir, but less sustained and shorter overall. Though not a high quality objective, the route is a good alternative if other routes aren't in shape, or if you want to combine this route with another.

If you're feeling particularly adventuresome, climb this route, traverse over to and downclimb McHenry's Notch, then climb the Hourglass Couloir. Descend the south side Arrowhead, then top off your journey by climbing one of the three routes on McHenry's north-east face. None of these routes are particularly conditions dependent, so finding them all in shape at the same time shouldn't prove too difficult.

Hike past Sky Pond and the Lake of Glass. North Gully is the next gully system right (west) of the Thatchtop-Powell Icefield.

A light rock rack with pins and perhaps a very small selection of screws. 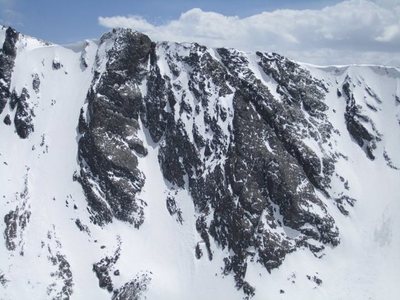 The North Gully of Powell Peak and surrounding… 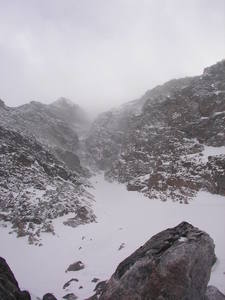 Andy Grauch part way up the North Gully of Powe…