The route includes a lot of classic Rocky Mountain-style climbing: ephemeral ice in corners, frozen turf, and hooking on mostly good rock. We were there in really ice-lean conditions, and we guess that several of the challenging moves can be more easily surmounted with fat conditions.

Pitch 1, M5, 60m (not new): This is the same first pitch as Plan D. At the top of snow slope, start up a short section of chossy rock to enter into the left side of the U-notch. There are a couple of places where intermediate anchors could be set, but we pushed up to a somewhat level terrace.

Pitch 2, M6, 60m: from the grassy terrace, ascend the obvious, steep, slightly right-arching crack. The first half of this pitch has a stretch of well-protected M6 moves (physical crux). After about 100 feet, step right onto some balancy, face moves. The line then heads right along ledges. Belay in a trough (where the route meets back up with The Inquisition). This pitch could be easily divided into two.

Pitch 3, M5+, PG13+, 30m: we could not pull through the rock band (with the obvious kite rock) as suggested by Greg Sievers & Brian Verhulst - because of lack of ice. Instead, we followed the set of the obvious cracks 15 feet to the left of the kite. Its clear that this is not the optimal line, if the ice were in. The crack may look casual, but there are a couple of awkward, heads-up sections (mental crux). After pulling the lip, you are at the top of pitch 3 of The Inquisition. For all intents and purposes, this is just another variation of pitch 3 of The Inquisition.

The route name was inspired by the disgusting marshmallow treats consumed around Easter (we were there on Easter weekend), the shear volume of turf, and possibly the general mindset of the first ascent climbers.

On Powell Peak, on the left side of Vanquished Wall, The Dirty Peeps Variation begins and later merges with The Inquisition. 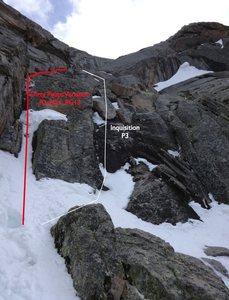 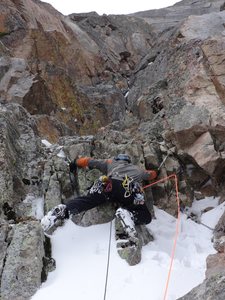 Steve Hobbs on the first pitch of Plan D. 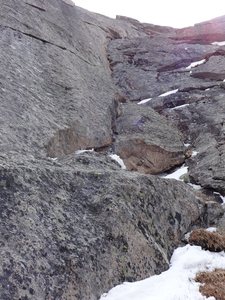 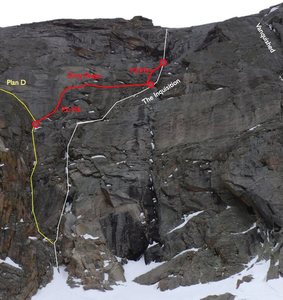 The route in relationship to other climbs on th…