Routes in 7. The Slabs

Updated and History added by R Hall Sept 2017, with permission of the original submitter.

This route may rival the 3rd Flatiron as the best easy multi pitch climb in the states. Although the climbing is relatively easy, there are huge runouts (30-50ft) and few features.

The description below is the way the route is usually done today. The "Alternate" is actually the route of first ascent.

P2 (5.1R 110ft) Angle up and right past a few flakes and belay at the Toilet Bowl. (This was once filled with dirt and vegetation.)

P3 (5.2R 150ft) Head straight up, you may pass remnants of two old bolts, but the first real pro is about 50 ft up at a flake mid pitch. Belay on a ledge with large crystals.

Variation P6 (5.7 PG 120ft, P4 of Slabs Direct) A better pitch heads up and left, then steps back right past a bolt (crux) and up, to end at the same location as P6. (A full description of this pitch is given in Slabs Direct.)

"Alternate" Pitches: Alt P3, 4 and 5 is actually the original route.

"Alt" P3 - From the Toilet Bowl, head up and left to the base of the arch. 140 ft 5.3 R  NOTE: I believe the base of the arch can be reached in one 70 meter-long (maybe even 60m??), rope-stretching-maybe-simul-climbing-for-a-bit pitch directly from the Launch Pad with nearly zero protection.

The following pitches may be the original route, or may be variations.

Descent: Head to your right across the flat top of the slab, and find a wandering path that quickly (2-3 min.) intercepts the official hiking trail (yellow blazes). Take this down in the direction of Cathedral Ledge (north), passing the hiker's turn off to Cathedral Ledge. Once "down" take a right back towards the base. It is possible to rap the route with two ropes, if it starts to rain.

History: In the spring of 1928 Underhill, Towle and Holden climbed to the top of the arch [the Std Route followed the arch until the "quartz pocket" variation became standard sometime in the 1990's.]. There they were met with a thunderstorm which forced their retreat down the slabs with one rope (probably 100 or 120 ft long, perhaps as short as 60ft, as was custom for the day) for the three of them. This they succeeded in doing, although at one point Holden had to "tackle" Underhill who was "slip-sliding-away".

In Oct 1929, feeling thwarted, the "dynamic duo" of Underhill and Henderson (most probably the strongest rope team in the western hemisphere at the time) hiked to the top and negotiated their way down to the trees above the "brown spot / boilerplate". Here they dropped a rope and left it in place.

The rope was used to "assist" (as in "A-0") all ascents until Leland Pollock (one of the stronger rock climbers in the northeast) lead the moves free in 1932. [ps Vibram rubber was invented in 1937, and didn't come to the US until after World War II.]

The brown spot/boiler plate was lead without bolts for more than 50 years until well into the 1980's or 90's. (I don't know the exact time the bolts were added.) Prior to the bolts being added, a piton far behind you, and actually lower than the climber, was the only "protection". The potential for a 20+ft fall, followed by a 20ft pendulum was very real.

Light SR, including some small tricams 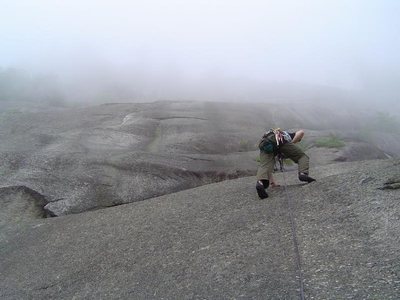 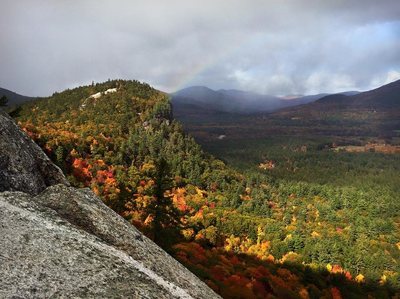 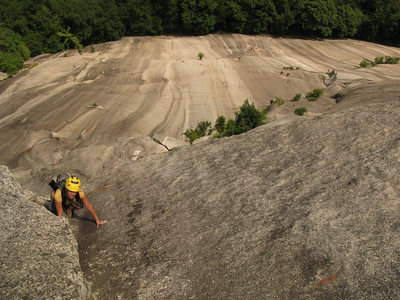 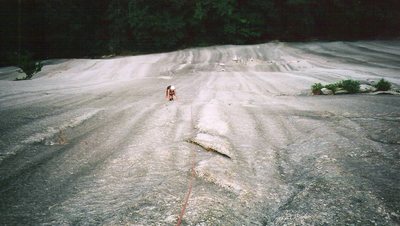 Simul climbing the slabs with the wife... 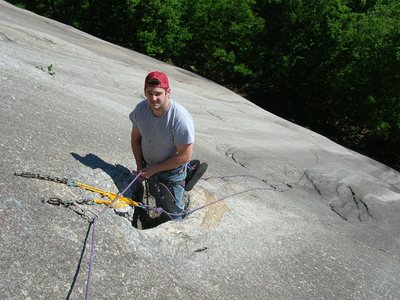 Me in the toilet bowl. Photo by Loran Smith 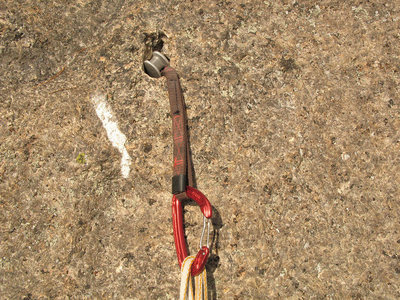 One of the weird holes in which tricams really… 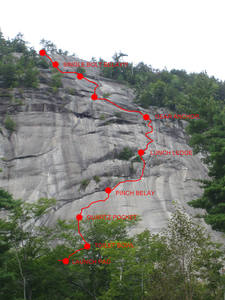 Overview of Standard Route done with the 'Quart… 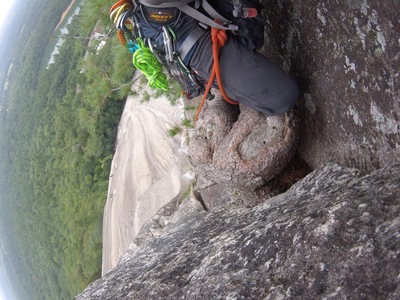 Looking back at a team at the toilet bowl (Oct.… 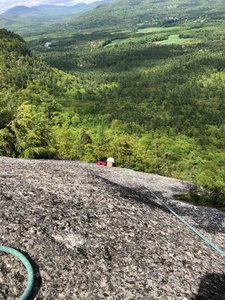 Wife glaring at me on the final pitch before th… 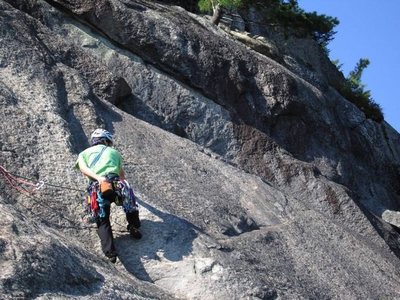 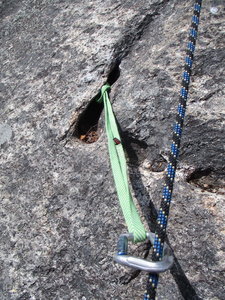 Threaded Tunnel 1/2 way up P3 above the Toilet…