Routes in 7. The Slabs

Wedge is a great climb located on the open slab between Sliding Board and Sea of Holes. The route offers some great slab climbing as well as some low angle face climbing. The route protects well but be ready for a couple of your typical Whitehorse run outs.

[Admin's COMMENT 2015 - The first 2-3 pitches described by the original submitter of this route are those described in the old (1996) Handren guide as the alternate start for Wedge. They are further right than the FA route. I've chosen to put the FA route first, the alternate is given second.]

The FA party climbed directly up from the base to this left-most of the two "bushes & tree ledge", probably in two pitches. (Those were the days of 150 ft-or-shorter-ropes, and sneakers, which were used on the FA.) Today you can just about make it with a 70m rope in one pitch, although the second will have to simul-climb up 20-25 ft for the leader to reach the tree. There is a small overlap(gear) part way up which might serve as a belay.

P1- The more modern way starts from the Launching Pad on Std Route. Go up and left, passing one bolt in the "sea of slab". (NOTE - This bolt is hard to see. It is located directly below the right end of the right-tree-island, about as far below the end of the island as the island is long. )  From the bolt (possible belay) continue traversing nearly horizontally to the left tree island.  The second might have to simul-climb up a little way, although a 70m might make it.  220+ ft  5.3 R

P3- Move up and right from the anchor, passing a recently-replaced bolt. [If you follow this you don't "climb to the overlap and clip the rusty pin".] Gear belay at the ancient ring piton at the "small tree ledge." 70 ft 5.5-5.6  The original ("boltless") ascent probably went directly up to the steep overlap and then traversed horizontally.

P4- Up the obvious corner system(s) to the crux (new-ish bolt, up high and left). Above the balancy-crux, continue up a few more feet, then traverse right to a comfortable ledge and new bolted anchor. Be sure to have the follower(s) protected on the crux. 80-90 ft, 5.6-5.7

P5- Up the inside corner system that is just left of the belay. A wonderful pitch, with many “mini-variations” ( in other words, finding the easiest route might be interesting) End at a pine tree with slings. 90-100 ft 5.6, 5.6+ ? A brush is sometimes handy here as pine needles collect on the holds.

[ This is a candidate for a dbl bolt anchor. Someone has “ backed up” the 8-10 inch diameter tree with cord to a 3-4 inch tree. Ha! Sort of like tieing an 18-wheeler to a Volkswagen Beetle to keep the 18-wheeler from falling off a cliff! ]

As said above, most will chose to end here and rap (or lower off: it's less than 1/2 a rope length for 60m ropes) back down to the dblt bolt anchor at the end of P4. A series of double rope raps will get you back to the Launching Pad.  There is a way to do this with a single 70m, but you need to work this out yourself.

To join Sliding Board, from the bolted belay at the end of P4 move up and right diagonally across the slab below the large overlap. Go around its end to a 2 or 3 inch ledge and an old pin easily backed up with med-large Cams. 100 ft 5.3-5.4 PG-13 /R for both leader and follower You are now on Sliding Board at the belay below the run-out slab that leads to the dbl bolt anchor just below the "headwall" broken by an obvious dike.

P6, 7, 8 etc. of Wedge - To maintain the 5.6 grade, move up and left on the big tree ledge and find the groove (sort of a "V" chimney) where Dike Route climbs through the big overlap.  There used to be an ancient piton.  Above this wind you way up the slabs to the top, intercepting Standard Route. Be extra careful of rocks just laying on slab in these final 2-3 pitches !!! There are probably climbers below !

P1. Same as "the more modern way" described above. ( from the Launching Pad on Std Route go up and left, passing one bolt in the "sea of slab" to the left-most tree island.) .

P2. Climb straight up the blank slab passing a two-bolt anchor [the dbl bolt anchor of the "FA Wedge"] and a single protection bolt. When you reach the headwall, clip the old rusty piton and traverse right to a comfortable ledge. You can make a 3-point anchor using the rusty piton, a nut and a small cam. [NOTEs- You reach the pin (if its still there) by climbing left of the bolt. Many climb up right of the bolt. Note that you have combined P2 and P3 of the FA Route.]

P3. (Same as P4 above) From the anchor, head up the slab and climb the nice lay back crack. At the top of the crack, clip a bolt and make thin moves up and right to gain a nice ledge with a two-bolt anchor. Do not forget to protect your partner on the traverse to the belay ledge.

P5. (Same as P6 above) If you choose to top out, climb up and left of the pine tree to a large ledge. Traverse the ledge until you reach a corner with some old pitons in it. Climb the corner to the tree ledge above.

Note: The rock will have a lot of lichen on it so be very cautious as you climb the corner to the tree ledge.

P6. (Same as P7,8 etc above) To reach the top, find the path of least resistance keeping in mind that you will want to head up and to the right. Stay roped together and protect yourself and partner by slinging trees and or placing gear as you make you way to the top. It is all scrambling/simo-climbing so take your time and be very cautious, there are lots of LARGE rocks just laying on the slab(s) and it is often the rope, not the climber, that may dislodge them!

From the starting ledge, look for a clump of bushes up and to your left.

Willie Crowther had an eye for routes. ( including FAs of Sliding Board, and Arrow at the Gunks) He made the FA of this route in the late 1950’s ( ‘58 or ‘59) wearing tennis shoes ( aka “sneakers”) without putting in a bolt!  ( He later added a 2 bolt anchor at the end of today’s P2, and a bolt at the crux on P4.  (The protection bolt on P3 was added later.)

So, you ask, on the FA where did he belay at the end of P2?  In the days of 120 to 150 ft ropes, he ran P2 and P3 together by having his belayer untie from the rope, and tieing the rope going to climber-3 onto the lead rope. Willie then “carried on” passing over the now-pitch-3 “mini-crux” to reach the ledge with the small tree, essentially soloing the entire long pitch. The 2nd and 3rd then tied in close together on what was left of the 2nd rope and simul-climbed while on belay. (Don't ask me what happened when the knot reached the pition under the overlap; maybe it wasn't placed on the FA ! THAT would be just like "Willie" ! ]

About the route descriptions

The first published guide to Whitehorse ( Joe & Karen Cote, 1969) listed Wedge as one of the 7 routes on Whitehorse. ( plus 1 “ incomplete route)  The guide contained an excellent photograph of the slabs by Peter Cole that showed the lines of the routes.

This photo clearly shows Wedge as starting from the base of the cliff, at a point left of Sliding Board ( and thus well left of Standard) and climbing more-or-less directly up to the LEFT-most of the two “ blueberry ledges / a.k.a. tree islands”. (This is 230+ft, but there is a small overlap which could have been a belay spot.)  From there the photo shows the route climbing directly up the slab to the overlap at a point slightly left of today’s “Booklet” corner. It then traversed right to the ledge with the small tree.
The text description ( all 35 words, 6 or 7 of which are "the" or "to", for a 8-9 pitch climb ) did not even mention a tree island/ ledge, although it did START the route at the launch pad ledge on Standard.
At first glance and read the photo and text (…”the final ceiling is tricky”) imply that that the last pitch to the big “Dike tree ledge” (P5 in the diesciption) did not take the flaring corner normally climbed today, but climbed overlaps/overhangs (…”ceiling”…) to the left.  BUT, later guidebooks cleared this up when they described the route pitch-by-pitch....the "final, tricky ceiling" is on the pitch above the big tree ledge of the Dike Route.

By Cote’s second edition (1972) the text description had been amended to “climb up to [a] clump of trees or to [a] flake”. The left tree island has a flake just above the tree. So this seems to indicate the island of FA. Unfortunately, the photo with routes was omitted in this edition.

In 1978 Paul Ross ( then of EMS climbing school) and Chris Ellems published their guide to Cannon, Cathedral, Humphrey’s and Whitehorse. I'm pretty sure this was the first commercial guide to the North Conway area to employ the now standard pitch-by-pitch route descriptions. (Although Whipple, Hall and Peterson had used it for Cannon routes as much as 13 years earlier.) In this description of Wedge, Ross has the climb starting at the Launch Pad and going 200 ft  to the right-hand of the two tree islands, and then ( P2) up the slab, “passing a bolt at 40 ft “ for a 140 ft pitch to a belay, then the short ( 40 ft) pitch 3. ( Ross does NOT mention the bolt on P3, although all other protection bolts are mentioned, implying it was placed after 1978.) This is clearly the "alternate" but with a single bolt (40 ft above the tree ledge) where there is now a double bolt anchor.

This was the first description whose P5 described climbing “ grooves and cracks” to the big tree ledge. (As opposed to below the ledge as Cote’s 1969 photo showed.) It put the “ceiling” on pitch 6 ABOVE the Dike tree ledge ( or at least at its top ) with a bolt and said “ to climb free is about 5.8” ( a grade fewer than 10-15% of the climbers would "red point lead" in those days) and gave directions to keep the grade at 5.6 by traversing to where the Dike route climbed through the short, steep wall above the tree ledge. However, Paul notes that the description is “ not the same pitch by pitch as the original ascent…some is probably a variation ..by Paul Ledoux and John Yates in 1974 which climbs just right of Wedge.”  Amen!

Thus, it would seem that the FA did climb up the "grooves and cracks" as described in P5 (P4 of the "alternate start") and that Joe Cote erred in drawing the line up a series of overlaps to the left of P5 in his first guidebook, perhaps confusing with the fact that somewhere up there there was a move that "struggled" with an overlap: perhaps Ross's "5.8 free" move? [now listed as 5.7].  Today the only route left of the "groove P5" is Mu, a 5.10. 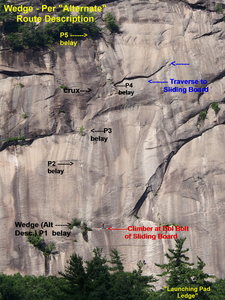 Wedge - some pitches can be combined, see text 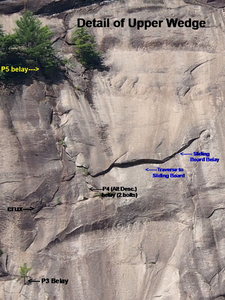 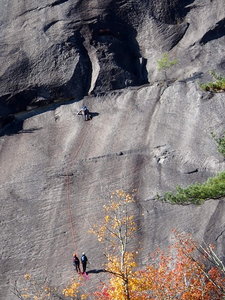 Wedge - the two seconds are at the belay on the… 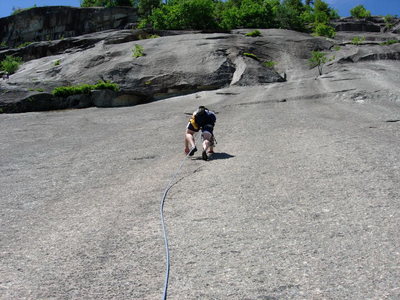 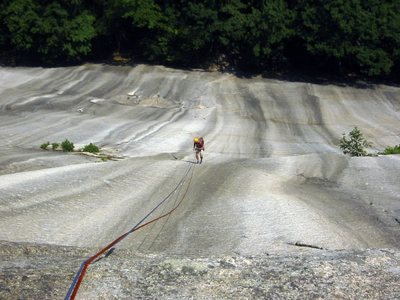 Rappelling off of Wedge via Sliding Board. 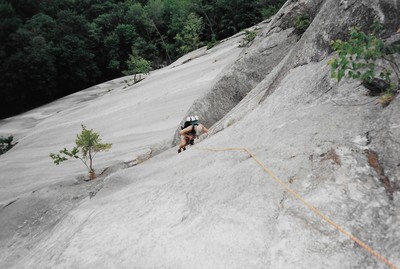 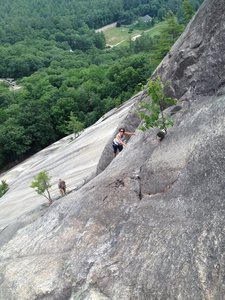 Carol Halupowski on the fun 5.6 crux corner on… 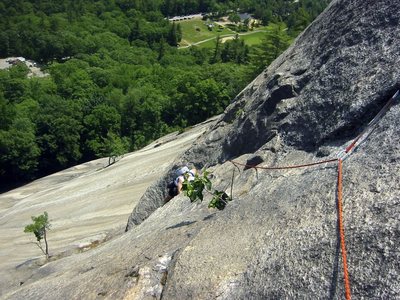 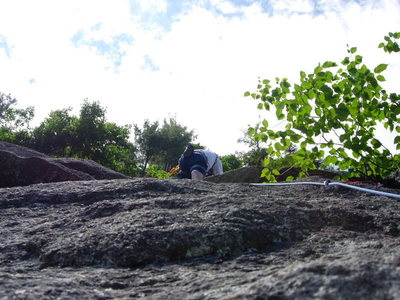 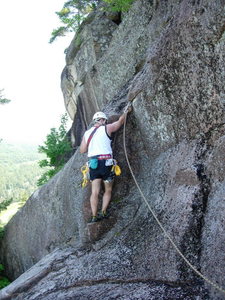 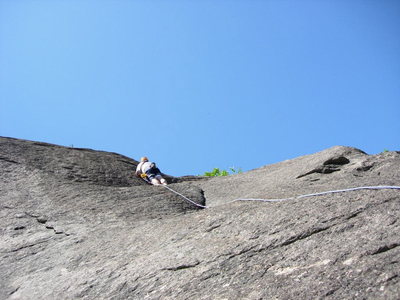