Access Issue: Some rocks in this area are on private property. Be respectful when crossing private land. Details

The remainder are on US Forest Service land. A map detailing the public areas can be obtained from the ranger station en route to the rocks from the village of Tres Piedras.
According to Jan Studebaker: "The property linemountainproject.com/v/new_m… runs from approximately the current east corner by the access gate in a straight line over the top of South Rock to the top middle of the Chicken Heads/Mosaic Wall mount, and from there west down the mount slope to the meadow just south of the Alley climbs. Some of the most popular routes are completely on private property. There are survey markers on the top of South rock (the mysterious aluminum stake stuck in the rock) and on top of the Mosaic rock (most of the time buried in water in a pot hole.)"

An online Tres Piedras Route Guidelamountaineers.org/Tres_Pie… from LA Mountaineers has been updated with the latest access information, and should be read by all Tres Piedras climbers. Group climb leaders, and Climbing Directors (future or past) should take particular note.

Access Notes: Tres Piedras climbers should sign the waiverlamountaineers.org/Tres_Pie… found on this page because the popular South Rock is mostly on private land, as is some of the access to the area. The landowner requests NO fires, no trash, no chalk and "please close any gates". Basically, be a good steward of the land.

In order to nurture greater landowner acceptance of climbers, participants of group climbs are requested to organize quick clean up activities before leaving the area; this should include the climbing area as well as the access roads (trip leaders could supply plastic grocery bags). Small parties should practice "leave no trace" principles.

This route ascends the obvious sinuous crack near the center of the south side of Mosaic Rock. The crack starts out as sort of a deeply recessed off-width; as the crack narrows, climb it, as well as the platey face left of the crack, using the cleft for protection. At the top of the crack (ca. 105 feet up) is a nice ledge on the left (where, as Jackson notes, "a controversial set of shiny fixed anchors has recently appeared").
If you rap off from this point, a single 60m rope will take you down to just about 5 feet above the ground, where you land on the gently sloping rock apron, so watch the rope ends!
Above the ledge, you're out of the crack; a short face takes you to a horizontal seam; traverse right and then up onto easier ground -- some people have finished Chicken Heads this way also.
If you intend to climb the entire route (and not bail at the bolted anchor), it's not worth the time to split it into two pitches at that anchor. Better to do the whole thing as one pitch, but it will be a rope-stretcher with a 60m.
This route is described and illustrated by Foley (2005:78-79) and Jackson (2006:67-68). This is also probably the same as the two-pitch climb named "Thin at the Top" in the 1981 guide. In the 1984 "Tao's Rock II" guide, this crack is plotted on the overview map and is labeled with its current name, but no route description is provided. It is described in the 1991 "Taos Rock III" guide.

The usual approach from the parking lot to the south side of Mosaic Rock puts you in the vicinity of Chicken Heads; from there, walk right (east) for about 75 more feet to this climb; if you start climbing up the hill around the southeast side of the rock you're too far.

Single set of cams and nuts.
Build a gear anchor anywhere you like on or near the top of the formation (the prominent grassy ledge is good, or you might make it to the next good ledge past that). Walk off the top to the east.
Although you can rap off the fixed anchors at mid-route with a 60m rope, you probably can't easily toprope the crack off of those bolts, because the rope ends are just above the ground, and the base of the climb is a good ways off to the right of the anchors' plumb line (maybe you could TR with a 70m rope, though). 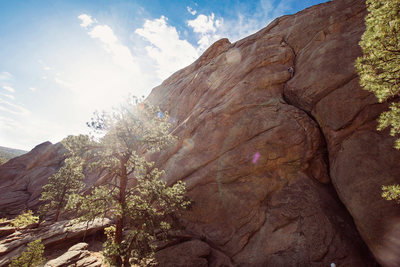 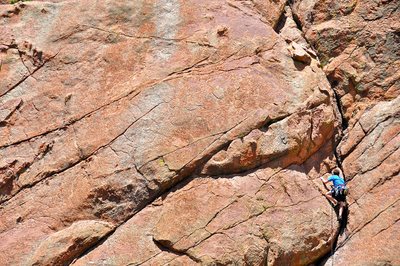 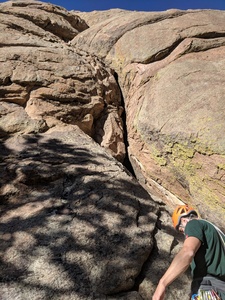 Jon racks up at the base of Serpentine Crack 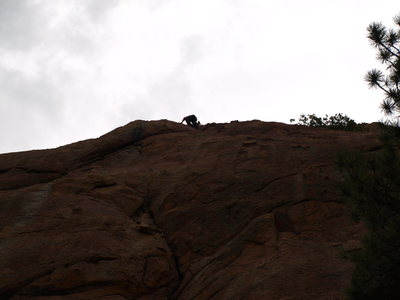 Top out time with the setting sun in the west. 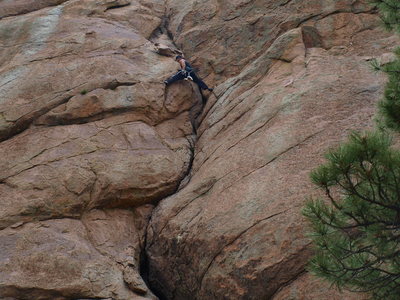 Another nut catcher in check. 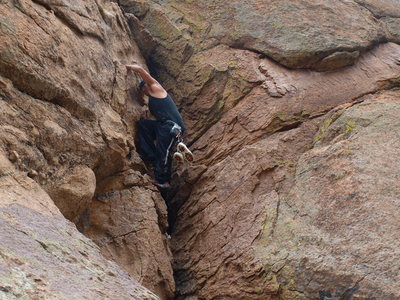 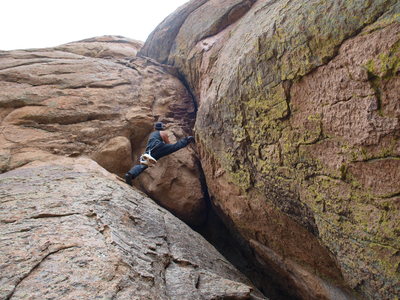 Josh with his shoe nuts. 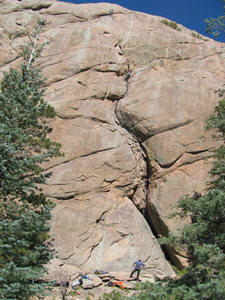 Jonathan Slator and Dennis Jackson on a splitte… 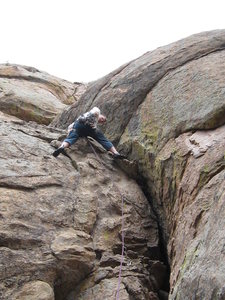 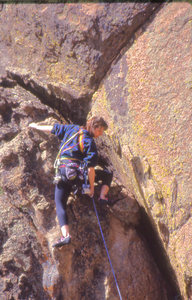 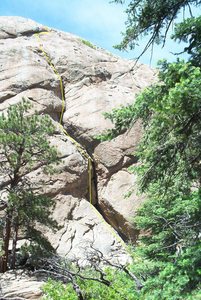