Access Issue: Some rocks in this area are on private property. Be respectful when crossing private land. Details

The remainder are on US Forest Service land. A map detailing the public areas can be obtained from the ranger station en route to the rocks from the village of Tres Piedras.
According to Jan Studebaker: "The property linemountainproject.com/v/new_m… runs from approximately the current east corner by the access gate in a straight line over the top of South Rock to the top middle of the Chicken Heads/Mosaic Wall mount, and from there west down the mount slope to the meadow just south of the Alley climbs. Some of the most popular routes are completely on private property. There are survey markers on the top of South rock (the mysterious aluminum stake stuck in the rock) and on top of the Mosaic rock (most of the time buried in water in a pot hole.)"

An online Tres Piedras Route Guidelamountaineers.org/Tres_Pie… from LA Mountaineers has been updated with the latest access information, and should be read by all Tres Piedras climbers. Group climb leaders, and Climbing Directors (future or past) should take particular note.

Access Notes: Tres Piedras climbers should sign the waiverlamountaineers.org/Tres_Pie… found on this page because the popular South Rock is mostly on private land, as is some of the access to the area. The landowner requests NO fires, no trash, no chalk and "please close any gates". Basically, be a good steward of the land.

In order to nurture greater landowner acceptance of climbers, participants of group climbs are requested to organize quick clean up activities before leaving the area; this should include the climbing area as well as the access roads (trip leaders could supply plastic grocery bags). Small parties should practice "leave no trace" principles.

[This is a very slightly edited version of the beta Dave Dogruel gave me. Dave asked for a disclaimer: "my memory of climbing routes is not perfect." Dave updated the photo for Dung Alley, his route is the one on the right in bright orange.]

The route is just left of the obvious dead/broken tree stump coming out of the rock, about 5 feet off the ground.

The first 20 feet is pure run-out friction of 5.7, maybe with a 5.8 move or two. A fall here would be a slide and a belayer could easily catch the leader as he/she might slide back to the ground. (You can also walk up the crack that the tree stump is in.) There is a good boulder to sling at the base for an anchor for a belayer.

One could probably protect the horizontal crack that intersects the tree stump with a flex-stem small cam, but I preferred to stuff one into the vertical crack to the left end of the horizontal crack. I followed the crack up the right side of the "buttress" to the little tuft of grass seen in the picture. The grass is still there and I recall using the spot right above the grass as a place for both feet while I placed a cam in the crack just above the stance. I then veered a bit left, working along the big boilerplates, some of them a bit hollow-sounding so I didn't yard on them very vigorously. You can go right or left around the big boilerplate flake in the "lichen band" in the picture; I think I did it both ways over two climbs and the climbing seemed the same either way. Above this big boilerplate, there are a few places to protect in cracks with small cams and mid-sized nuts in this area, and there are two solid flakes (one small, one large) that are great to sling for pro. Above this large boilerplate, you can look up and to the right and see a piece of static line that runs through at least one bolt hanger (I didn't actually see the second hanger but it looked like there was one based on how the static line was hanging) as the rap anchor if you are using a 50 meter rope. Since I had a 60m, I continued climbing toward the left, where you can now see the two bolt hangers (no chains or other gear) near the top, indicated by the two red Xs in the picture. After clipping one of them, I explored the top of the route, delighted to find a nice fat crack about 10 feet back from the lip at the top for a fine anchor with several #3 to #3.5 cams and a place for a large nut or two. No problem reaching and tying into the anchor I made with a 60m rope. I would estimate there were about 20 feet of spare rope with my belayer.

I would rate the climb a solid 5.7, with fairly consistent moves once you are past the first vertical crack. There is lots of lichen on the climb, but I thought there were plenty of solid hand and footholds on good features that I didn't worry about the lichen. I suspect one could also climb more to the right from the start and end up in line with the anchor identified as the one for Summer Dreams (with the piece of static line), but I think the route I took was more fun, still safe and gained an additional 30 feet or so of climbing. It is also obvious that few people climb any parts of this route since there was no chalk and plenty of lichen.

This climb is on the northeast corner of Mosaic Rock, around the corner from the descent gully. There's a stump from a dead/broken tree coming out of a horizontal crack at the start.

A 2-bolt anchor [with burly chains] is at the top of the interesting climbing, (with so many flakes, I was hesitant to rappel and scrambled off the top and down the standard descent after lowering my partner).

1 set nuts, 1-2 sets cams to 3". A 2-bolt anchor is at the top--not at the location marked "approx. location of Summer Dreams anchor" in the photo, but as shown for Dung Alley. (9/09: Dennis Jackson said he believes this to be the Summer Dreams route, didn't know which route these anchors further right are intended to service.) 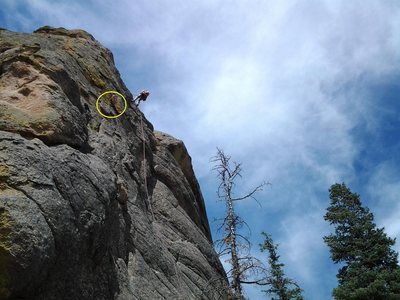 Some of the detached boiler plates - Cuidado! 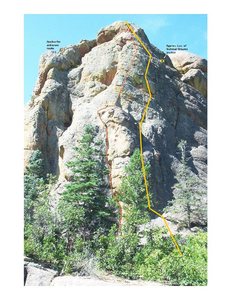