This "lonely" route has three high quality pitches, all with steep crack cruxes. Receiving little to no traffic, it is relatively adventurous, with some lose rock, lichen, bushes and no chalk to guide the way.

P1. (5.10-, 100'). Ascend a shallow, "funky", left-facing corner past raspberry bushes to a handcrack through a roof; the handcrack is plainly visible from the ground. We entered the corner by traversing right 5' from the right side of the above-mentioned ledge. Belay above the roof, in a "gully" 30 to 40 feet below an ominous looking hanging block.

P2 (5.10, 120') The book version of this route continues up the gully and under the hanging block. The variation we did avoids passage under the block, adds some difficulty and quality and is described here. The right side of the belay gully is a v-slot capped by a steep wall with a hand size crack system in it. Climb this crack system via jamming and laybacking and move back left into the regular route, passing a large tree on its left, above the hanging block. Continue upwards easily until immediately below The Trident, an overhanging block split by three cracks which resembles Neptune's handtool. When viewed from the middle of the talus on the approach to Rincon, The Trident is a quite prominent.

P3 (5.?, 30') Climb one of the cracks. The left one, looks the easiest, the right one seems to belong to the route "Variation V" while the center crack was to us the most compelling. The center crack was somewhat reminiscent of Art's Spar, Vertigo or Whiplash and though a one-move-wonder, was the crux of the route and felt to me like 11a. (Note: I'm more comfortable on cracks than roofs and found P3 much harder than P1 or P2; my partner, with opposite strengths, found P2 and P3 about the same.) 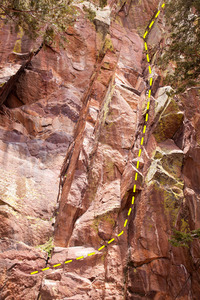 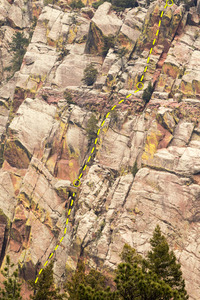 Most of the route. The first pitch below the ro…