This is a beautiful line directly up the middle of the Community Pillar formation. There are many opportunities for variations, and you could climb the route several times and have widely differing experiences. The choices aren't always obvious, so some explanation is in order.

The start: The "normal" start is in enclosed chimney and goes behind the right side of a huge (cabin-sized) chockstone. This is very tight and scary for a big guy, but the slender and flexible seem to scamper right up. Those fearing claustrophobic death have a few options. Benjamin Smith (see below) suggests a chimney to the left of the chockstone as shown in this 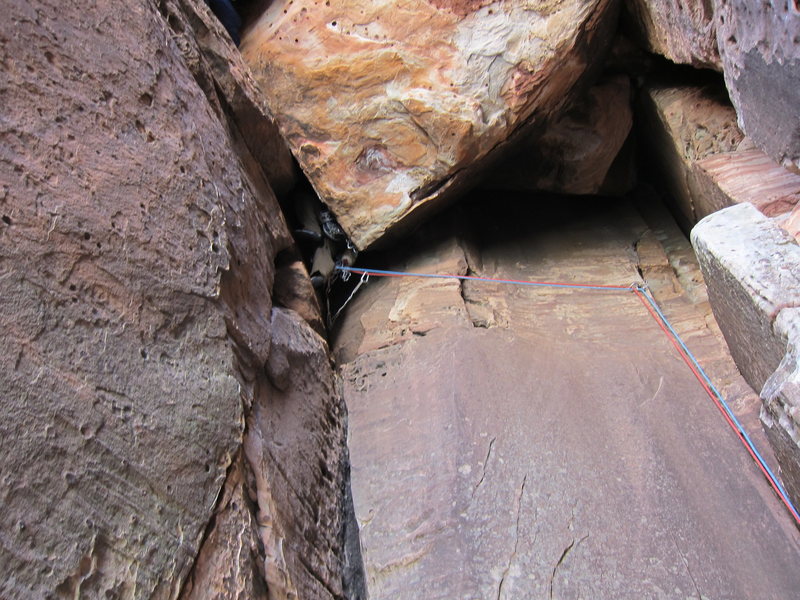 My suggested first pitch of community pillar. . I have heard of people climbing on the outside of the huge chockstone (passing it on the left), but have no first-hand experience. In all these cases, the route continues up the wide crack above the chockstone to a large ledge and easy ground beneath a deep chimney. This point can also be reached by a variation start which bypasses the chockstone and its associated squeezes: climb a 5.8 corner about 30 yards to the right (west) of the normal start.

The next pitch goes up the easy ground and enters the deep chimney, bearing right at the overhang. The tunnel at its top is pleasant and roomy. Belay at the large ledge.

There are two choices above. On the right is a long crack and squeeze chimney with limited protection (5.8). To the left, you can ascend some blocks to a clean, varnished hand crack. This is generally considered 5.9, but is better protected than the wide crack. Both options lead to a small ledge beneath a steep, featured crack. Another pitch up this crack takes you to a belay in a surprisingly extensive cave.

Again there are many ways to continue. The obvious-looking (but not recommended) "window" to the right leads west to Cartwright Corner and substantially harder climbing. It is possible to step back out of the cave entrance and climb the unprotected face on hollow-sounding flakes. Another way is to climb straight up the crack in the cave and move left via some peculiar bomb bay moves and go through a narrow portal leading back to the outside and an easier crack. Probably the best option is to continue up the crack (bearing slightly right at the portal) and heading toward the apparent dead-end at the cave's roof. An unseen squeezeway at the top leads to an opening through the rubble into the floor of another cave above. This is the the upper belay spot for all the cave variations of this pitch.

Climbing above this point leads through an obvious opening above and follows progressively easier climbing to broken ground and the unroping spot.

DESCENT:
From the top, scramble to the right (west) to a pine tree in an area of broken rock. Rappel cautiously, then scramble down to the small saddle separating this formation from the Magic Triangle to the west. The most common descent these days is to rappel the gully to the north (which can be done with a few 30-meter rappels). The original descent involves scrambling south and going down the Crabby Appleton approach gully with a few short rappels.

An alternative descent, using double 60m ropes, goes via rap stations on Chocolate Flakes. Scramble to the south to a pine tree in an area of broken rock. Rappel west on one rope. Scramble north to a large obvious pine tree to make a second rappel on one rope - this second rap going north and landing on a ledge with bushy vegetation. You are now roughly at about the same elevation as the the top anchor of Chocolate Flakes. Go through / skirt above bushes on skier's ~right for 10 or 20 feet (?), then scramble up and over to the east on ledges; i.e., do not fully go down the revealed gully on trodden tree-bush trunks and limbs. If this traverse is done correctly, you will end up on a broad sloping ledge with bolted rap anchors about six feet below on a steep face that faces east - the top anchor of Chocolate Flakes. Do three double-rope raps to the ground. The first two are around 55 or 60 meters each; on them, you will pass up bolted anchors at about 30 meters (they'd be hanging belays / rap stations).

Some big gear can come in handy... 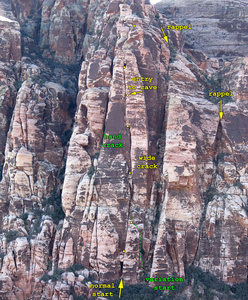 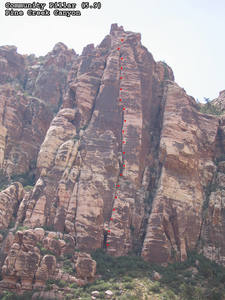 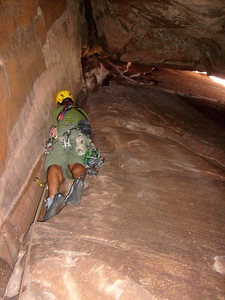 The start of the upper cave pitch. 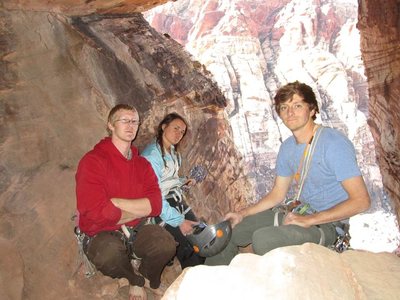 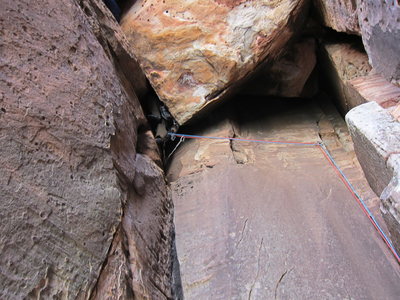 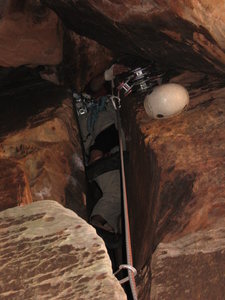 Should've brought some lube - going for the cru… 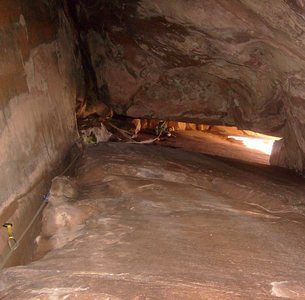 At the very top of the upper cave, just before… 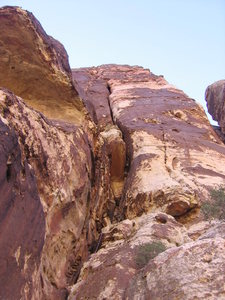 5.6 chimney on the right 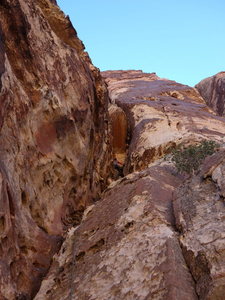 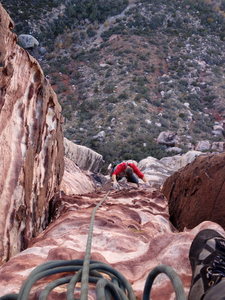 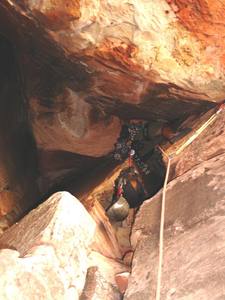 Start of pitch one; Just about to squeeeeeeeeee… 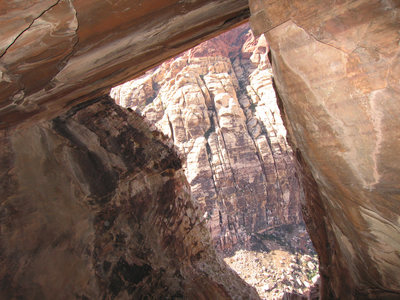 On Community Pillar, looking out a cave