The Brown Palace runs up the entire length of the southeast face of Mary's Bust, beginning on the left corner at Proud Mary, and traversing right to the base of a gorgeous, 4-ft wide brown dike. The dike continues up much of the wall, receding into the fabric of the cliff at times, but prominent at other locations -- the route strives to follow the dike.

Denver denizens know the Brown Palace as the hotel in downtown Denver built by Henry Cordes Brown (construction began in 1888; the hotel opened in 1892). Of course, you don't need to live in Denver to know about The Brown Palace, as it's a famous four-star resort. It seems fitting to also award four stars to the route, though we'll let the critics weigh in on the matter to get a definitive answer. You can't beat it for sport climbing of this variety: SIX pitches of bolt clipping with very nice rock, excellent position, and flat-out fun the entire way. I like calling it the Naked Edge of sport climbing -- a big stretch given the stature of the Naked Edge, but it's a fine route nonetheless.

First Ascent: as noted above, a route of this magnitude required a lot of man-hours and team work, and several people contributed. Bernard Gillett, Paul Bodnar, and Jim Bailey did the FA of the first pitch. The last pitch was done by Mark Ronca and Gillett as part of There's Something About Mary. Gillett, Paul Foster, and Ronca worked out the details on the middle pitches; these were first led on the FFA of the entire route by Gillett and Foster.

Pitch 1: 5.9-, 70 feet, 6 bolts. Begin at the left edge of the main wall next to a big pine tree. Clip the first bolt on Proud Mary, and then make a rising traverse right to gain a ledge. Walk right to a bolt on Deceiver, and continue up and right past two more bolts and a tricky move before a two-bolt belay on the right side of the brown dike.

Pitch 2: 5.10c, 9 bolts, 85 feet. Follow the brown dike (the most aesthetic climbing stays on the dike itself; it's a little easier on the right) to its top, then step right to a flake. A #2 Camalot can be placed here, or do two more moves to the next bolt. Steep climbing lies ahead (5.10c): stem through a corner, bump left, and finish with a thank-god jug to a good stance at the base of a prominent rib (bolts and chains).

Pitch 3: 5.11a, 9 bolts, 85 feet. Waltz up the bolted rib (the continuation of the brown dike) to a chimney. Bridge up for a ways (take care with a big, hollow flake at the base of the chimney), and then move left onto overhanging rock. Several tricky sequences lead left and up around a bulge (5.11a) to a small ledge with two bolts. The belay is a short distance right of the last pitch on Proud Mary.

Pitch 4: 5.11a?, 4 bolts, 40 feet. This short pitch goes straight up a discontinuous column (I think also part of the brown dike formation) to a small overhang. A weird crux follows, maybe only 5.10+ for the long-limbed folk. Belay at two bolts in a solution pocket above the overhang. A bit of poor rock must be endured at the crux; it's the only funky rock on the entire route (and it should clean up some as the route gets repeat ascents).

Pitch 5: 5.10, 12 bolts, 120 feet. Angle right off the belay to access a nice slab with mellow climbing. Half way up the slab you will encounter two lovely chicken heads that appear to be made in the mold of the brown dike. Continue up to an overhang, and yard through with a long reach (height-dependent crux, I'm thinking, somewhere between 5.10a and 5.10d). Easy climbing goes past a rappel station (long sling) and one more bolt; the pitch ends at a good ledge with two bolts at the base of the upper headwall.

Pitch 6: 5.10d, 9 bolts, 70 feet. The final pitch is shared with There's Something About Mary. Follow the bolts to the top of the wall (crux near the end), avoiding the loose flakes on the left at the bottom of the pitch. It's best not to grab the blocks resting on the belay ledge, either -- they look reasonably solid, but if they came off, they might reach the road.

Per Liz S.: beware of a toaster-sized, unattached rock on the left that looks like the resolution hold. This is about 3 feet below the anchors.

How cool was that??? Enjoy the view and rappel the route.

Start at the left edge of the southeast face of Mary's Bust, beneath the first bolt of Proud Mary.

Because I suspect this may become a popular route, here are some other options to avoid rappelling over other parties.

1. You've done the first 3 rappels and are atop the 3rd pitch, with the bolts of Proud Mary to your left. Swing left on your next rappel to find the rappel station for Proud Mary (it is not on the route; read its description). Then rappel straight down to the anchor on top of Deceiver, and then to the ground.

2. Scramble off the back side to the rappels on The Devil's Backbone. Begin by roping off to the NE (40 ft of 4th class) and then head for an obvious pine tree. Go through a notch to its left, and carefully down climb the 3rd class slabs on the back side of Mary's Bust. These lead to a saddle between Mary's Bust and a short gold wall behind it. Turn left, traverse beneath the gold wall, shimmy down the far side of a big boulder, and switchback left to the edge of the cliff that sits immediately west of Mary's Bust. Rappel The Devil's Backbone (3 rappels, 60 m rope required).

15 quickdraws will do it. Bring a few long slings for rope drag. A #2 Camalot comes in handy on pitch 2, and it could be placed on pitch 3 to decrease the distance between bolts (unclip it afterward to reduce drag). Bring a little more gear if you want to eliminate a few more bolts: I think the route has 62 bolts (belays included), and we could have done it with perhaps 4-5 fewer bolts, but I didn't see the point with a route this big.

You'll certainly have enough rope left over to combine pitches, but rope drag argues against it. If you want to try anyway, #4 and 5 could be combined with 17 QDs. But the belayer won't be able to see the leader at the 5th pitch crux. 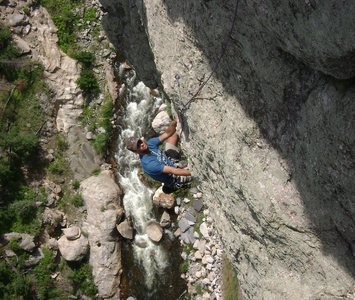 Nice exposure from the top of pitch 5. John La… 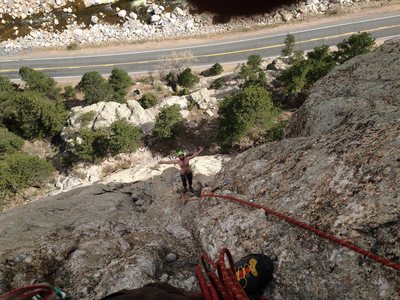 At the top of the short pitch 4 waiting for Wil… 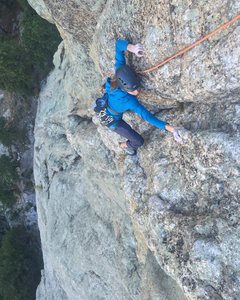 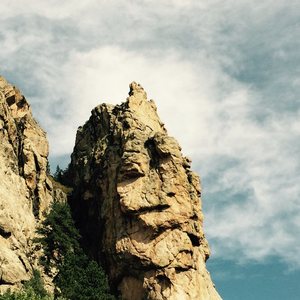 Rapping off the top of Brown Palace. 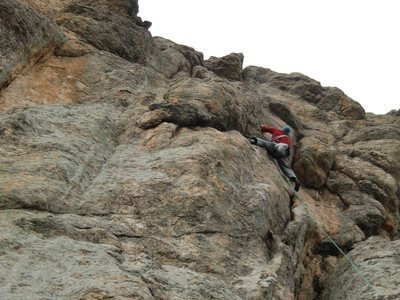 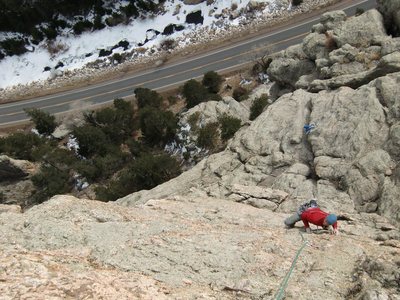 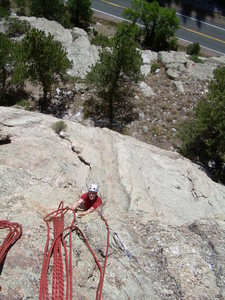 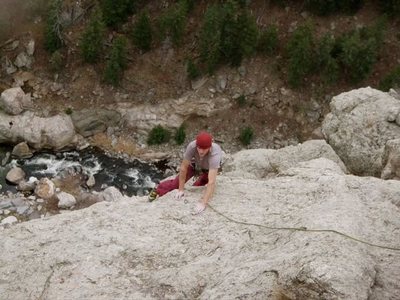 Sam finishing up the 4th pitch 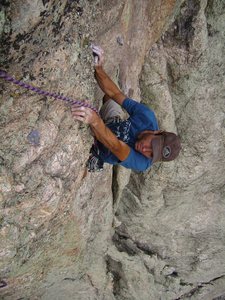 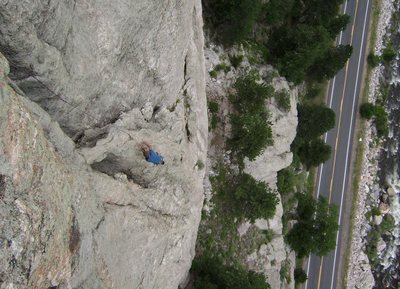 More About The Brown Palace