In 1961, Jim Disney climbed a route that came to be known as "Direct," 5.6 A4 (from Fricke's 1970s guidebook). Direct's limited write-up said it ascended a "black, evil chimney" near the center of the wall (about 40' left of where the approach to the cliff). It goes up into a deep, dark slot about 130 feet up, and perhaps 30 feet right of P2 of Maternal Damnation. Disneyland ascends the arete left of Direct and then crosses over it on P2.

P1. Go up to a ledge beneath the white scar a little left of center (an old mine), and move right to belay. Climb into a steep groove with quartz crystals, and climb along the left side of an arete past 7 bolts (10) to a stance (bolted anchor with chains).

P2. Climb the left edge of the chimney (4 bolts and a cam in an overlap, 10), and then cross over its top into the crack system. Move right after 15-20 feet (long sling), and continue up a steep wall (4 bolts and possible cam, 10) to a belay with chains.

B. Gillett has toproped (X) 200 feet above the current high point of the route. The second half goes over a 10- overhang and then follows a right-leaning 5.8/5.9 half-pipe (bordered on the left by an attractive dike).

Scramble up to a ledge at the base of the mine hole near the center of the crag and 15 feet below and right of the start to Maternal Damnation.

Bring 9 QDs for the first pitch. The second requires some cams and a double-length runner. I placed a #0.5, #1 and #2 Camalot. 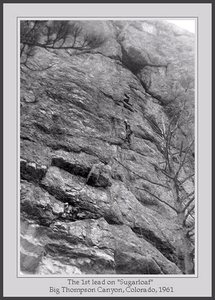 Working on the first ascent of the "Direct" Rou… 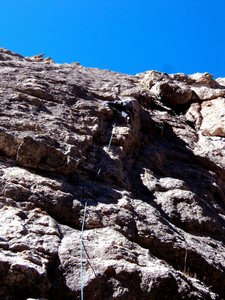 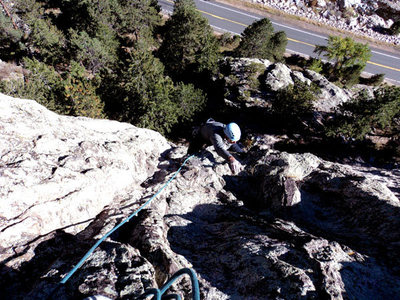 Brian pulling through the overhanging bit at th…