Per JF M: as of May 2022, there is no signage on-site, nor information on the USFS webpage for the Cameron Peak Fire (nor on their published map of closures) that indicates the area is closed.

Per Bruce Hildenbrand: it appears that the Forest Service has closed access to all the climbing areas accessed via Storm Mountain Road (Monastery, Cedar Park, Combat Rock, etc.) until they can clear all the dangerous dead trees from the Cameron Peak fire.

Per Kurtz: there are nesting peregrine falcons on The Broadmoor. Please climb elsewhere!

Violet Blue runs up an old aid line on the west face of Mary's Bust just adjacent to the gully that separates the two main crags. The route was installed ground up, solo, and on the lead using hooks and some other related tricks. The original aid start was left alone and may provide a difficult and protectable alternate start. VB consists of three pitches and stops well short of the top of the crag. Rock above the final belay looked unpleasant but could certainly be led safely to the prominent ledge below the final yellow plate that tops out Mary's Bust.

P1, 5.11c, 65 feet. Saunter up moderate terrain to a spot below the roof. The roof is negotiated by a powerful, but brief, sequence that dumps you out at a double bolt rap stance.

P2, 5.11b, 85 feet. The second pitch starts out steep and remains overhanging its entire length. The line was intended to stay away from the grungy crack that diverges off left, but if the pump hits it is possible to bail out for a short rest. The upper section is continuous, interesting, and the best pitch on the route. P2 picks out largely excellent rock for its entire length. NB: there is a potentially loose block at the mid point that was not pulled off. It's is very obvious, and there is no reason at all to even touch it. I tried to pull it off by hand, and it would not budge. However, things being what they are at this altitude, it's best to leave it alone and use the jugs on the left. In addition, the block is large enough that some chance exists that it could go all the way to road should it be pulled off.

P3, 5.10b, 70 feet. Follow up the pillar on the right by either laying it back or climbing directly on it. Stem the corner above to a brief crux move. One can rap from the double bolt anchor or climb over the top to a flat seated belay. I placed the top belay, above the rap station, with the thought that there may be some utility in climbing the remaining 100 feet.

Mark Tarrant strung Violet Blue together for the red point FFA, while my bum hip continued to grind away its now useless joint surface.

This is on the left side of the crag and uphill from Proud Mary.

Thirteen draws, something for the anchors at the top of each pitch, and a 60 meter rope. CAUTION: In rapping Violet Blue from the top, you will need to be very careful of the second rap. From the top, the first rap is easy and the rope pulls nicely. Rapping down the second pitch will leave you at least fifteen feet out from the belay, in free space, unless the first person back clips the final three bolts with both strands of the rope. This is really key. From the top of P2 you cannot touch ground even with a 60 meter rope, so you do need to rap P1. The first person down then needs to fix the ends of the rope at the belay. I checked this out jugging the lines and was unable to swing into the belay at the top of P1. The rap from the top of P1 is routine. 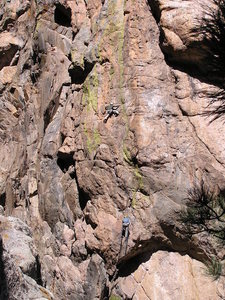 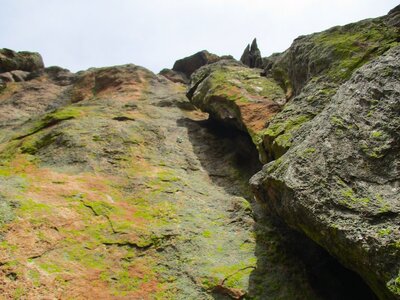 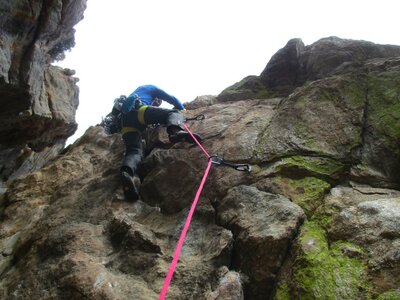 Nate A. starting up pitch 2 of Violet Blue. 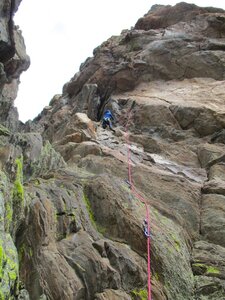 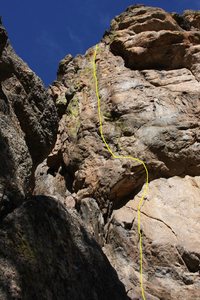 A foreshortened view of VB showing all but the… 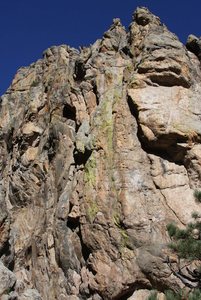 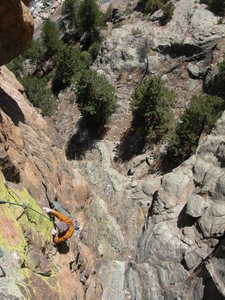 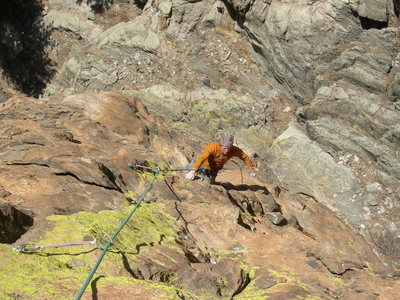