This isn't really a finalized route description. I tried to follow the line named "The Trough," which is route #17a in Beverly (2006:219-220), but I failed. This current route description is more of a mini-trip report, warning where not to go when you try this route. When I figure out the correct line, I'll update this page. Anyone have any beta?

Beverly notes that The Trough is an 'easy crack in cornersystem with bushes' that has a 2-bolt anchor. His topo indicates that the anchors lay at about the same elevation as those of Sunbaked and Protein Supplement to the right.

Although I couldn't see an anchor from the ground or from the top of Sunbaked, I set off up Beverly's illustrated line for The Trough. After pulling through two fairly fun little roofs, the dihedral got rapidly dirtier and looser, although it stays at 5.7. By the time I was above the level of where the anchor was supposedly indicated, the crack system degenerated badly. For example, just below a beautiful 2-foot-diameter dish on the left face of the dihedral, a microwave-oven-sized shattered block is poised to fall out at the drop of a pin; this block will certainly take out your belayer if it goes.
Most importantly, I found no bolted anchors anywhere in this vicinity or to the right. Although it appears to stay at about 5.7 above that point, and you might be able to top out and walk off, it'd be a loose nightmare. I chose instead to downclimb the whole 'route'.

In retrospect, I may have gone right after the first roof when I was supposed to go left (see the beta photo for the possible left option), but I still didn't see any anchor bolts in that area. However, there is a mystery bolt line way up high, between, and well above the tops of, The Trough and Vitaman (see the beta photo); anyone know what that is/was?

The start apparently proceeds up a crack and dihedral on the left side of the nice face containing Sunbaked and Protein Supplement.

Standard trad rack. Still can't confirm whether there are anchor bolts up there or not. 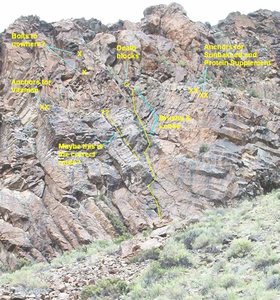 More About The Trough