This easy crack climb ascends a left-leaning seam that gradually steepens into a blocky left-trending dihedral.

As noted in the comments section of Roid Boys, Karl Kiser and Tom Wezwick climbed this crack (in the 1990s?) and put in an anchor. They knew it was previously climbed because an old sling was found in the crack. Mark Thomas then put up Roid Boys and placed the upper anchor bolts where they could be used by both routes (because the rock at the top of the Old Sling crack was less than good).

A route name and topo are posted online by Bradshaw, although the route appears misplotted on that photo topo (i.e., too far right).

Also described and illustrated by Beverly (2006:219-220) as climb #16 (which incorrectly states that it shares anchors with climb #10 - actually they are shared with climb #15). Jackson (2006:138) identifies this as route #2.2, and names it "5.8 Trad Route." Jackson's narrative description is partly correct, except for the notes on the descent, but most importantly his photo topo is completely wrong and should NOT be used.

Near the right (northerly) end of the Sunshine/Winter Wall, climb the first crack system to the right of Roid Boys. Three main cracks ascend here; I picked the rightmost one because it led more directly into the upper dihedral.

Although this route shares anchors with Roid Boys, it is actually longer than that route because it starts farther right, so a 60m rope will NOT set you back down at the base of this specific route if you choose to lower or rap to clean your gear. And because the route angles so much, lowering or rapping to clean is pretty dicey and could open you to a big swinging pendulum after you pull your lowest piece. Maybe better to have the second climb and clean, and then both climbers descend straight down Roid Boys, which reportedly can be rapped with a single 60m rope (although it too will apparently "come up a couple meters short of the ground").

Standard trad rack of nuts and cams to about 3 inches. Shares a two-bolt, chained anchor with Roid Boys. 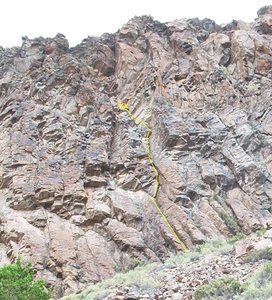