Old Sling Straightened is mixed gear and bolts route established by Sharon and Greg a couple years ago on the right side of the Winter Wall. Story has it they were looking for a line they could climb over and over for years to come and liked the lower part of a route they believed to be Old Sling because they found an old sling in one of the cracks. But the upper parts were horribly loose and sketchy.
With that in mind they looked to the left and found some clean, short dihedrals leading to a clean panel of rock to finish up on. The dihedrals and final panel didn't protect well so they hand drilled four protection bolts on the upper part of the wall.

Start as for Protein Supplement following a left-angling seam on easy terrain towards a big, black roof using gear for pro. Pull the roof and cruise the low angle gully to another small, wide crack roof. Head for two, short, bolt-protected dihedrals above followed by an all-too-short finger crack section up to the final, steep headwall. To this point the climbing is fun and moderate. Clip two bolts on the final headwall, the 5.10 crux, up to the top. A single anchor bolt will be found at the top.

The route is at the far right side of the Winter Wall sharing a start with Protein Supplement. It's a full 60m. You can break the route into two pitches with a belay below the two, short dihedrals to minimize rope drag/weight.

Single rack of BD .3 to #3 cams. Wires could be useful but not necessary. 4 protection bolts along the way and a single anchor bolt at the top along with a big rock to sling serve as the anchor. Walk off to the north and swing back down to your packs and tasty peanut butter and honey sandwich. 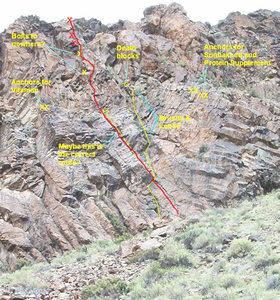 Old Sling Straightened is the red line in this…