Beautiful, spacious, and often daunting, the Sierra Nevada in the Lake Tahoe area contains some of the best summer climbing in California. The area is almost entirely covered in climbable rock, but there is some choss to be found.  There is a rich history of ground up ascents in and out the Tahoe basin by people ranging from unknown to celebrity -  like Royal Robbins, Warren Harding, T.M. Herbert and Paul Crawford to name a few. Much early climbing is undocumented, leaving fun mysteries for us explorers to stumble upon.

Consisting mostly of granite with a few basaltic crags located on the north shore.  You'll find climbs off all types, from the long multi pitch routes at Lover's Leap, to the pumpy tall bouldering found everywhere, but most notably Donner and Lovers Leap.

Climbing is year round in some places, though most areas are covered in snow from the first snow (usually in October or November) until March - June depending on altitude and direction of the rock.

Access is at most of the region's crags, especially in the public lands of the Tahoe and Eldorado National Forests. The Desolation and Granite Chief Wilderness areas have regulations you should learn about before visiting, but for day use, you can self-register for free at the major trail heads leading into them.

Also note that about a third of the Tahoe area and climbing is in Nevada, right across the unnatural straight state lines. See the Reno and Carson City area for the Tahoe vicinity's Nevada crags.

Places to stay are plentiful, from BLM camping(outside of the basin), organized campgrounds, lodges and hotels.

Both physical gear - to buy or rent - and the latest local beta can be had in Tahoe's climbing stores.

Is a fleeting thing! And discussed on some threads inside and outside this site. Some flows form every year, others rarely so, all over the region. While no routes are documented here yet (ahem), at least one area has been created to track them: Eagle Creek Canyon Ice Climbs.

Also see Lake Tahoe and Reno and Carson City for parts of the greater Tahoe region in the state of Nevada.

By Road
From the Bay Area, head up Highway 80 to Sacramento, where you will either head up into the hills either on 80, 50, or 89, depending on where you're going.

From Reno, head up Highway 80 to go to North Lake destinations, or down highway 395 , and then West on highway 89 into South Lake Tahoe.

Some out of area bus services are offered by Greyhound and Amtrak.

Tahoe and Truckee have ​the TART.​​​

By Air
South Lake Tahoe and Truckee both have municipal airports if you have the resources.

For the rest of us, the nearest city with commercial flights is Reno. For some Tahoe areas, Sacramento's airport might be a viable second option. Each one still requires a drive into the mountains.

By Rail
The first intercontinental railroad in the U.S. went over Donner Summit; one version of this line went through the Snowshed next to the climbing wall of the same name there. Amtrak still runs a train over the Sierra in this area, which runs through Truckee once a day or so. It's not cheap or fast compared to other modern travel to the Tahoe area, but is scenic (though it only goes by Donner Lake north and out of sight of Lake Tahoe).

By Trail
Each year during Pacific Crest Trail season, a batch of through hikers backpack in from the south through some of the highest elevation terrain in the area, above Lake Tahoe's West Shore. Other trails connect to Reno and Sacramento.

Some climbing areas also involve travel on the historic Pony Express Trail (mostly along highway 50), or on the Tahoe Rim Trail which encircles the whole lake. Riding bikes or horses, or hiking, can be used to approach some Tahoe crags and peaks.

Over Water
Around Lake Tahoe and some other area lakes, rivers or streams, deep water soloing or dry climbing spots may include travel by a variety of watercraft or swimming.

Once enough snow accumulates ever winter, many people ski and snowshoe to Tahoe's climbing areas, perhaps to do some ski mountaineering or ice climbing. 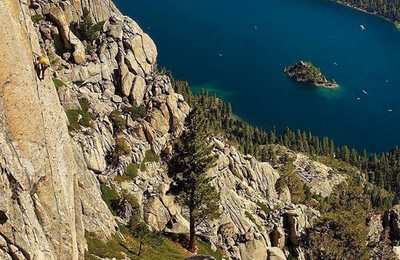 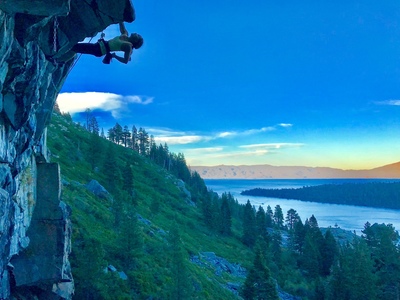 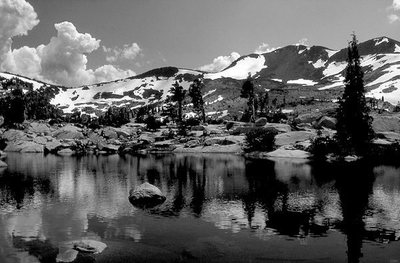 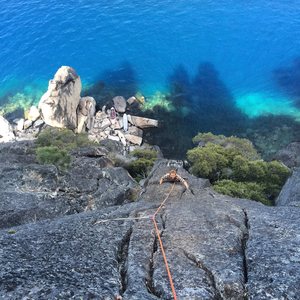 Trad climbs on the water at DL Bliss. Paddleboa… 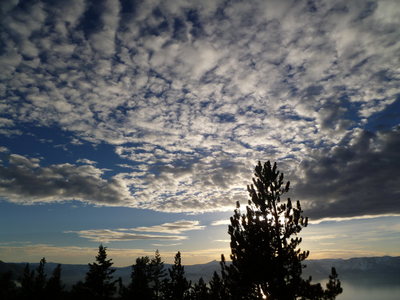 Speaks for itself January 2011 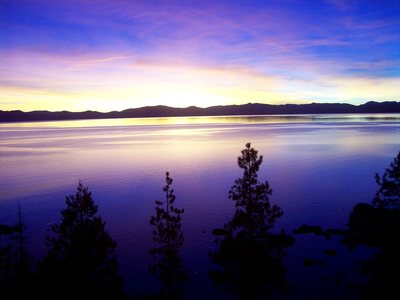 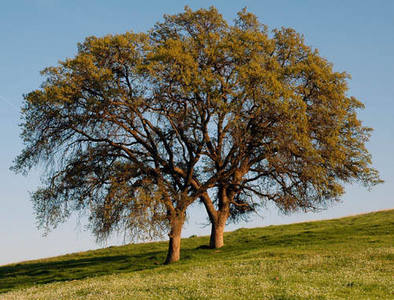 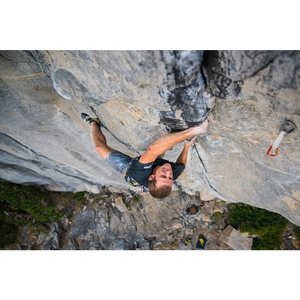 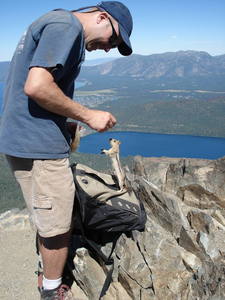 Brett making friends with the locals on Mt. Tal… 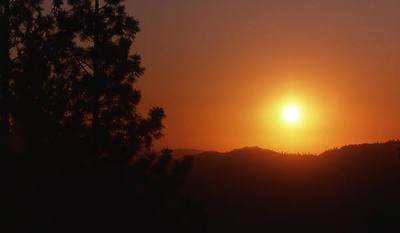 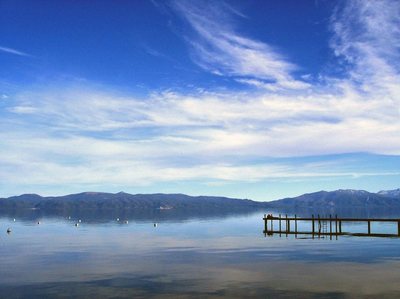 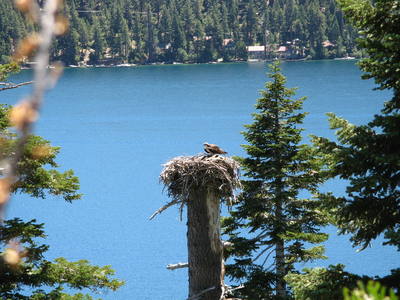 All Photos Within Lake Tahoe