Crazy Train climbs the rightmost smear spilling from an overlap in the prominent roof-alcove area between the Smear of Fear and Fields Chimney. To those with an eye for these things, it's pretty obvious, and often teases but rarely forms to the ground. The smooth rock slabs at bottom aren't encouraging if the ice isn't down. I'm biased, but we thought this was an incredible pitch - about 180' of steep, thin ice. Several parties climbed it soon after us, but I don't believe it has formed since (though conditions can change rapidly in the cirque, and what's "in" is enormously subjective). The awesome Black Sabbath song somehow inspired the route's name.

EXTENDED (history, and other nearby lines):

In 2000, I'd just moved to Estes Park, and kept asking about the Smear of Fear. I'd seen photos and dreamed of the legendary route, put up by climbers I'd idolized ever since I started climbing in Montana years earlier. Surprising how early the ice sometimes forms in the Long's cirque (and this route, as with the Smear of Fear, only seems to form in the fall), elevation and aspect do amazing things, and on a gorgeous fall day, October 10, Topher Donahue was nice enough to head up with the new guy in town. Sure enough, the Smear was classic. Not as bad as I'd built it up in my head, either - funny how that works - but superb. We rapped down, then figured we should have a look at the thing to the right. An old photo from a Lowe Alpine ad, I think showed Mark Twight bouldering at its base, but from what everyone had said (including Mark and the old RMNP masters), nobody had climbed it.

I remember pretty thin ice (but good quality - sticky, early season ice, though not always well bonded), especially at the start, and going a little ways until getting any pro - there's a couple of rock overlaps, and so at the edge of the ice I'd lean-out and place cams. Otherwise, it was stubby screws, though I think I got one 17cm screw higher up. The route saw several repeats soon after and may have come in a bit better in the ensuing weeks. I don't think it's formed completely since. Bolder climbers could make it happen, but I think it'd be mighty dicey to reach the ice given the rock slab start.

The rest of the area, to the left, beneath the arching roof and near the rock route Slippery People, holds a variety of other drips and smears, some of which were climbed during the couple of weeks of "line growth" (i.e. ice fattening) after we climbed Crazy Train.

Duncan Ferguson and Mark Twight repeated Crazy Train less than a week later, and Duncan - of many hardmen, Duncan was, is, the true visionary of mixed climbing in RMNP - told me that while rapping down he saw another possible line branching off to the left, and encouraged me to check it out. I hadn't even seen it, which reminded me of what I already knew: Duncan is the Jedi master. The rest of us are mere grasshoppers.

A side note on Duncan, and his soft-spoken, hype-free manner: I read a profile of him in Climbing magazine, summer 1993. The author (sorry, don't remember his/her name) wrote of the difficulty of wrangling info from Duncan:

"Well, I remember doing a thousand-foot route in Hallett Chimney in the springtime."
"When was that?"
"A long time ago."
"What was it like?"
"Mixed."
"Was it very hard?"
"Harder than I thought it would be."

Anyway, when you get a nod like that from Duncan, you'd better go. So on October 17 (I think), Joe Stock and I had a look. Sure enough, about halfway up Crazy Train there's a tiny, horizontal, rock ledge traversing off to left (it gets bigger as it goes but is pretty narrow to start). The ice was literally a few millimeters thick at its edge, just enough to reach out and hook the rock ledge. Good tools, bad feet, and no pro for the 30-foot horizontal traverse led to a moderate, right-facing corner. I belayed at a good stance atop the corner. Next pitch stepped left again, with good rock pro at the start, to gain a thin ice smear spilling from beneath the roof. I think I got one or two stubby screws before the ice thickened near its top. I can't really remember, but I do remember that all day long I had this Emmylou Harris song, Wrecking Ball, playing in my head. Considering the fall you'd take on lead or second on the first pitch traverse, it seemed a good route name.

That season, ice grew plentiful in that area - relatively speaking, anyway. Topher and Kevin Cooper cleaned-up with some great routes soon after. They did an extension from the top of Crazy Train that traversed leftward under the roof, with really cool looking, techy mixed climbing that connected ice drips and finished at the top of Wrecking Ball.

They also did one of the prominent lines to the left, starting with a rock ramp that comes in from the left to gain a very thin and technical looking smear with big runouts. They called it Morning Dew.

I know this started as a description of Crazy Train - apologies for rambling on, but this zone has great potential for natural lines. Depending on the ice, of course, and depending on skill and boldness - better climbers will surely fill-in the blanks and connect some of the rarely-forming smears above the roof. After Wrecking Ball, I remember returning to the CMS guide shack and, from the safety of my old rock-hard futon mattress and sleeping bag, dreaming about pulling onto daggers spilling from the roof and continuing above. A good fantasy, but only that for me - for another generation, it will be reality. Sometimes ice is there, sometimes not and rarely for long. But "The Chase," as I like to call it, remains an eternal aspect of the game. As Duncan once told me, "The lines define the climbing, rather than the climbing defining the linethere's an elegance there that I like."

A few cams for the rock overlaps, if you want them (ranging from maybe yellow/orange TCU, up to maybe 2"). Ice screws (mostly shorties, depending on conditions). 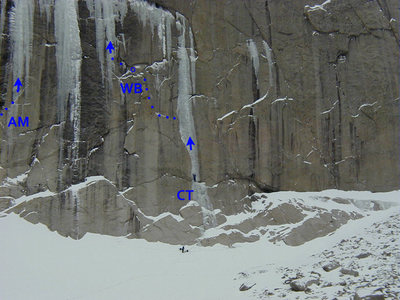 The Crazy Train (CT) area, a couple of weeks af… 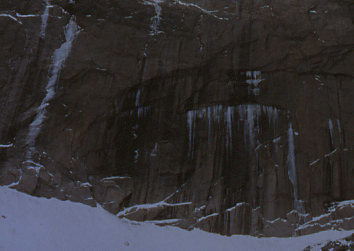 The Crazy Train area on the day of its FA (Smea…