The Lijiang area has become a super well-known destination for Chinese toruists since the late 90’s. Foreign tourists are also pretty common here, but their numbers are dwarfed by domestic Chinese visitors. Although best known for the mass tourism in Old Town, Tiger Leaping Gorge, and around Yulong Snow Mountain, there are growing opportunities for trekking and other forms of adventure tourism in the surrounding mountains and canyons.

Yulong County is the region surrounding Lijinag city and it encompasses a wide diversity of climbin. Here are the areas, as of 2021. More are being added yearly.

Shigu - Here is a sport climbing heaven on the glut of limestone faces looming above Damaidi village near the First Bend of the Yangtze River, about 1 hour west of Lijiang. Once you get to Damaidi, the living is easy and the climbing is super accessible.

Baiyansi Mountain - This granite wall, big and remote, lies 20 km up the Chongjiang River from Shigu. With routes up to 17 pitches (so far), expect to encounter route finding challenges and long runouts between tricky gear placements or occasional bolts. To their peril, climbers have wrongly assumed that Baiyansi is like Shigu because of their proximity. Epics have resulted. It is the exact opposite of the super well-bolted Shigu crags and nothing like the obvious trad lines at Liming.

Guanyin Gorge - The first crag developed in the Lijiang area. This small limestone area lies between Lijiang Old Town and the airport south of town.

Any guidebook to China has current access information for Lijiang. The Stone Drum House website has good information on getting to the climbing areas. 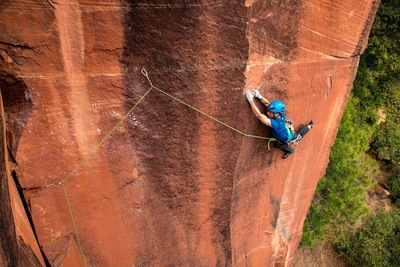 Woody holding on after nailing the dyno pc Math…

All Photos Within Lijiang Area