Most of Yunnan province lies on a rolling subtropical highland traversed by the Tropic of Cancer, officially known as the Yunnan Plateau. It is entirely underlain by limestone and a majority of Yunnan climbing crags lie here. A common refrain amongst new-route developers over the years has been that there is a lifetime of new routes awaiting anyone who starts poking around. There are hidden escarpments and caves everywhere, nearly all with high quality rock. Because this is the subtropics and rarely freezes, the frost shattering doesn’t weaken features on the face and you end up with reliably solid holds. The exception to this limestone orgy is Liming, which lies west of the Yunnan Plateau in the fore-ranges of the much more geologically complex Hengduan Mountains. Most of the Hengduan are a mish-mash of substrates, but the Liming valley is home to clean, pure, beautiful sandstone. The crags developed in the valley behind Shigu area are in the physiographic transition between the Yunnan Plateau proper and the jumbled geology of the Hengduan, but are all limestone.

Climbing Areas of Yunnan: Yunnan climbing is clustered in four areas of the province:

Dali Area – Two escarpments on the east side of Erhai (Er Lake) near the village of Shuanglang are the best developed areas and are treated here in Mountain Project with information from the main developer, Adam Kritzer. It is also covered in the Climb China guidebook published in 2015. Sport routes have been developed at two other crags in the Dali area: Shimenguan (Stone Gate) tourist site that lies a short distance directly over the Cangshan (Cang Mountains) from Dali Old Town, but for which a much longer drive around the south end of the range is needed for reasonable access, and a crag at the Guanyin Temple complex on the highway to Binchuan county town from Dali New Town. Shuanglang and Guanyin are good ole Yunnan Plateau limestone, while Shimenguan is on hard gneiss of the Cangshan uplift. A total of 75 climbs are recorded as of 2021, all but a few being bolted sport routes. In addition, the Daliwood bouldering area has recently opened up on the east slope of Cangshan, a short walk above Dali Old Town. Over 200 problems have been established as of 2017.

Kunming Area – Kunming city lies at the heart of the Yunnan Plateau, where adventurous locals began exploring the surrounding hills in 1999. Since then numerous caves and faces have been developed west of the city in a hilly belt extending from the Western Hills (Xi Shan) escarpment along Dian Chi (Lake) in the southwest and running northwest for 30 km to Fumin Canyon. This is just the beginning. There are plenty more hidden gems waiting to be found.

Lijiang Area – Climbing occurs in three widely dispersed valleys in Lijiang (now called Yulong) County. The sandstone cracks of Liming, 60 km (air distance) into the mountains northwest of Lijiang, have gotten the most international attention of any crag in Yunnan. Climbs there are treated in a locally produced guidebook and in the 2015 Climb China guidebook. Activity on the looming limestone up valley from the town of Shigu started in 2014 and is continuing at a rapid clip. Shigu lies in the Jinsha River (upper Yangtze) valley, 30 km due west of Lijiang and lower in elevation. Guanyin Gorge is a small crag developed in the early 2000’s and lies at the mouth of a canyon between Lijiang and the airport, 13 km south of old town.

Some background info about Yunnan climbing:

History: Here’s a brief history up to 2005. The first place to be developed in Yunnan was in the unique karst topography of the Stone Forest (Shi Lin), 100 km east of Kunming. Kurt Albert and Wolfgang Gullich put up some climbs there in 1986. During 1999 and early 2000, four sport routes were pioneered by Chinese climbers on the short limestone towers that constitute the “forest.” Stone Forest climbing was largely abandoned when the enormous potential of the Western Hills (Xi Shan) was discovered in 2000. The Western Hills, 15 km southwest of Kunming, still have nearly unlimited potential for new routes, from short, sport routes to high-end, multi-pitch lines on big walls. During May 2002, development began of a new area in a relatively remote valley of Fumin County. Lying 30 km northwest of Kunming, the atmosphere of this quiet, rural canyon is in sharp contrast to the mass tourism of the Western Hills at the edge of metropolitan Kunming. A small sport climbing area was developed near Lijiang in 2002 and in 2004. As of 2005, there were 7 climbs in a limestone canyon south of town. Wang Zhiming and crew began development of Little Dark Rain (Xiaomoyu) Cave in 2005, the first of many crags that would be developed in the hills west of Kunming city in subsequent years.

Climate: The limestone sport crags range in elevation from 1700 m in Fumin Canyon to 2200 m at Guanyin Gorge, near Lijiang. Liming village is similar to Lijiang in elevation, although sandstone cliffs are 200+m above the valley. Across the area, however, the relatively high elevation combined with a subtropical latitude (ca. 25o N) makes for a very pleasant climate. Indeed, Kunming is nicknamed the Spring City because of its enjoyable year-round weather. As expected then, you can climb throughout the year. Be aware though that precipitation is highly seasonal and the best seasons to climb are autumn, winter, and spring. The dry season begins in late September and runs through June. Monsoon rains begin sometime in June and persist through September, with the possibility of at least some rain nearly every day. There are times during the winter when the Spring City moniker seems like a marketing ploy by overly optimistic city fathers. It can be quite cold at times, but only if it’s cloudy. If that subtropical sun is out, it will be pleasant on the rock. Guaranteed.

Grades: In the early days of Yunnan climbing (and China, generally), the Yosemite Decimal System (YDS) was used almost exclusively, probably because American climbers (especially Skinner et al. at Yangshuo) had the most influence back then. But as Yunnan opened up for climbing, French grades also became common, especially for sport routes. You’ll see both grades associated with many climbs.

Equipment: Except for Liming, most climbs are bolted on limestone faces and roofs. At some crags, the first bolt was purposely placed relatively high off the ground and sometimes a long reach from the stance. This was done to prevent local villagers from stealing the hanger, which is also a common problem at Moon Hill near Yangshuo. A stick clip could prove useful. Again, aside from Liming sandstone, there are few trad routes in Yunnan due to the overwhelming dominance of limestone. There are a few limestone trad climbs in the Western Hills and Shigu and most are fun. A word of caution--most cracks have been created or altered by water (solution) erosion in limestone and are very uneven-sided. Nuts, tri-cams, hexes, and threaded webbing often afford the best protection. Be very careful when placing camming units in limestone. For Liming sandstone trad, there are are equipment recommendations for nearly every route. Helmets are highly recommended! The rock is generally solid, but few climbers have ascended some of these routes that there could be loose stones. Be especially careful on multipitch routes and when pulling ropes and top-roping. Helmets are essential for pioneering new routes. A 60 m rope is recommended for climbing in Yunnan. Many pitches are 30 m long and can only be top-roped with a 60 m rope. Some newer routes are even longer. Check out the side to each area before heading out to see if a rope greater than 60 m is necessary.

Trail and Route Conditions: Many crags described here are off the beaten path. As the Kunming climbing crowd has shifted activity to new areas, access trails and, in some cases, the climbs themselves have become overgrown with subtropical brush. Be aware that the descriptions in this guide are written as if the trails were open and the climbs had just been cleaned. We always carried a long Tibetan knife to clear the monsoonal growth every autumn.

Nasty Animals: During the late summer and early fall you’ll see a bright red caterpillar common on the brush. This beautiful little creature has a nasty bite that raises a large welt. Stay away! And then there is the occasional snake, but it’s rare to actually encounter a live one (although you’re sure to see shed skins on absurdly small ledges high on routes).

Check any travel guide to China. Kunming, the provincial capital, is the usual point of entry to Yunnan. Lijiang is a well-known international tourist destination and is covered in all foreign and domestic tourist guides. There are direct flights to Lijiang from around China and a few select international destinations. 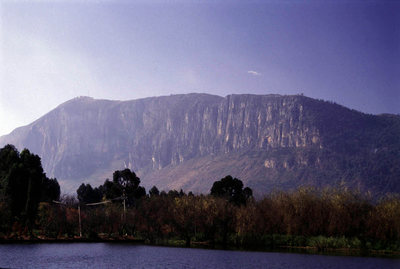 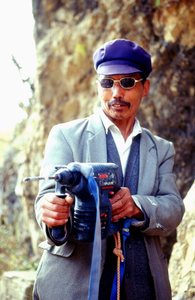 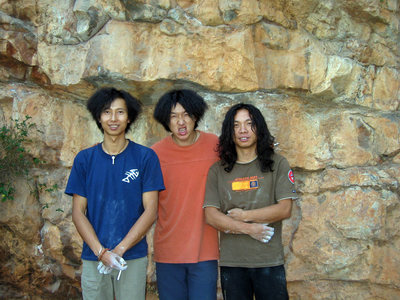 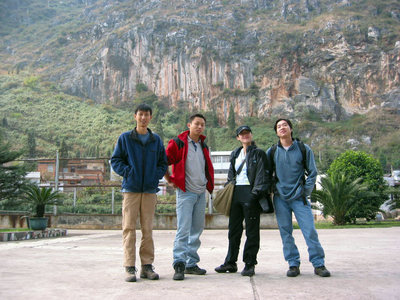 Starting the approach to Dove Rock (looming in… 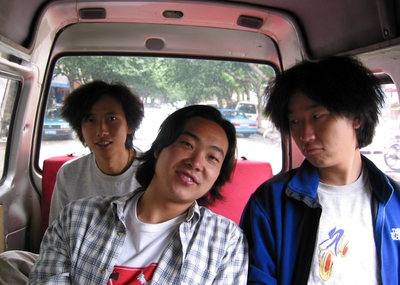 Mini minivan transport to the crag. 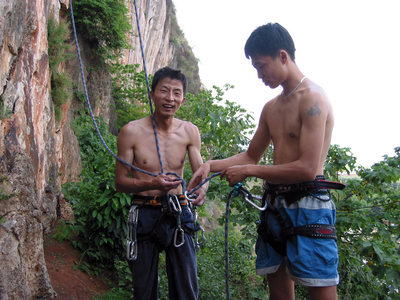 Loa Xiang on the ground after sucess on a hard… 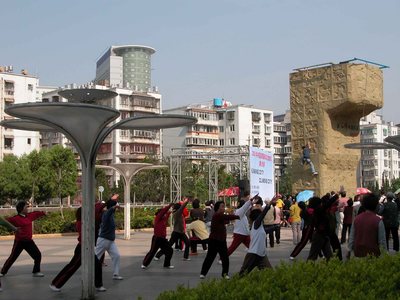 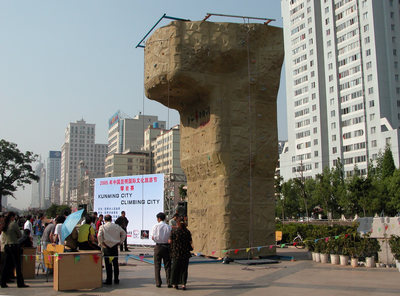 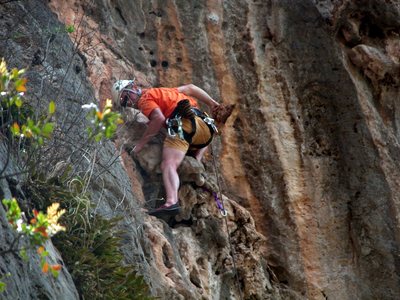 Some routes have not been climbed much, so be p… 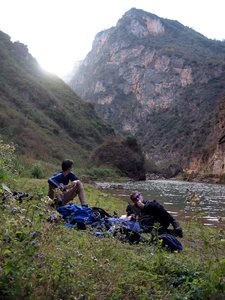 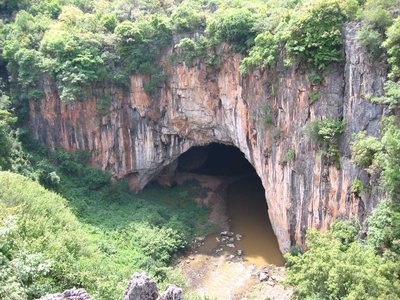 Typical cave on the vast Yunnan Plateau. No rou… 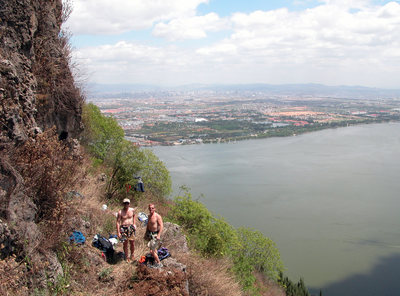 Winter is the climbing season of choice - long…

All Photos Within Yunnan Province