Routes in The Balconies

The Inn Crowd is located on the west end of the upper tier of The Balconies (It can be seen well from West Side Pinnacles parking). The route starts 100 yards to the south (climber's right) of If We Bolt It They Will Come (route number 711 in the 2007 guidebook). The start is also to the right of the large class three/four ramp which leads up to the routes Desperate Abandon and Gold Line (neither of which is in the guidebook).

To find The Inn Crowd, look for a slight, up-and-right weakness/ramp that allows passage between upper and lower rotten headwalls. The first bolt on the route can be seen about 20 feet above the ground (the climbing to this bolt is very easy). A total of ten bolts on the first pitch lead up and right (at about a 45 degree angle) 115 feet to a three bolt belay on a beach ball size lodestone (bring and use slings on this pitch). The second pitch continues right past one bolt and then continues straight up past five more to another three bolt anchor (six bolts total on this pitch). It is 75 feet from the top of the first pitch to the top of the second.

The Inn Crowd is a very sunny climb; it's in the sun from early morning until the sun sets. It is a good route for cold days (although it is located on the part of The Balconies that close for raptor breeding each January through July). It also offers great views and wonderful exposure.

Finally, two further items of explanation: First, the second pitch of this route ends at a stance on a steeper section of wall just below the ramp and about 20 feet below the one protection bolt on the old "discovered" route Desperate Abandon. The route ends here so that no bolts were added to or within sight of Desperate Abandon and so that the well protected nature of The Inn Crowd was not "diluted" by joining/finishing on the fairly run out upper part of that route. Second, the well protected nature of The Inn Crowd should be understood (and forgiven) since the combined ages of the first ascentionists exceed 350 years.

For a photo-topo that shows this route and other new/newly discovered climbs nearby, click on this link (which connects to the Mudn'Crud Pinnacles discussion forum - scroll to route number 711.6 and the link at the bottom of that route; I couldn't figure out how to post the photo-topo here):

Twelve slings and carabiners and a 70 meter rope (or two shorter ones). 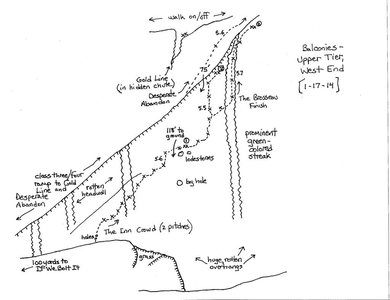 Topo map of the Upper Tier-West End. The big ho… 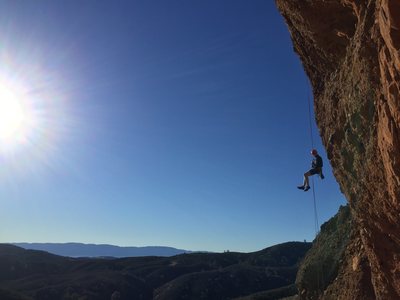 Coming down the second rap on a beautiful Decem… 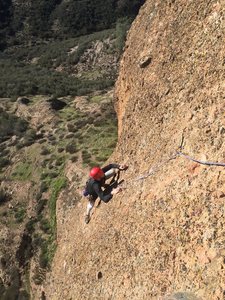 Tim S arriving at the top of the first pitch. 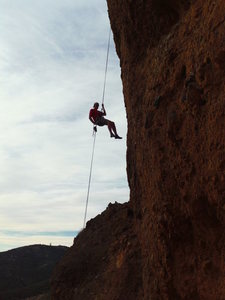 Kevin on the last section of the rappel. 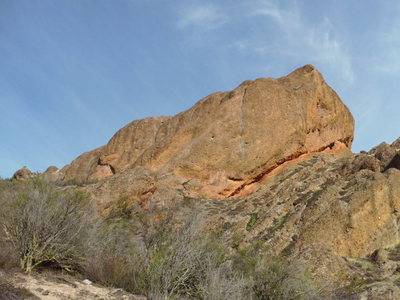 A view of the face from the trail on the ridge. 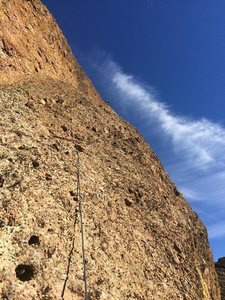 Heading to the first belay anchor.

More About The Inn Crowd