Routes in The Sheepshead

Ewephoria is a nice, mostly bolted route up the North side of the dome. Though not as classic as Absinthe of Mallet or Stampede, its shorter length, many bolts, and easier rating make The Sheepshead more accessible.

P1: Up the dihedral until a bolt leads out left, then up to a bolted belay. This pitch looks super-easy from the ground but is surprisingly harder than it looks. Gear: small to 3".

P2: Move left for a move or 2, then up past bolts & small cams.Then climb up and right to a bolted belay just left of the gully. Do not go all the way to the gully. Gear: a few small-medium-ish cams.

P3: Follow the tightly bolted line up a slippery slab to a headwall. More bolts take you up and right past the headwall. Run it out a bit on giant holds to a bolted belay amid the huge chickenheads. It is possible to get some gear by slinging chickenheads and/or large nuts/hexes between the plates. Gear: a couple big nuts/hexes and some long runners.

P4: Climb straight up past more chickenheads, then up and right past bolts to a large ledge & comfy, bolted belay. Gear: 1 or 2 large slings or cord to wrap chickenheads.

P5: The regular route then follows the large chimney on your right up to the top (the original finish for Absinthe) or for a much better option, finish on on Too Tough To Die, which goes at 5.8. To do this, follow bolts up from the belay to a huge chickenhead. Surmount this, then climb up and right past bolts on an exposed slab to the top. Gear: an optional large nut/hex for the big chickenhead.

To descend follow cairns down and left to the obvious gully on the North side, then follow the trail back to the start.

The first pitch is trad and takes pro to 2". The second pitch is mostly bolted, but pros with a couple of small to medium pieces in the crack. All other pitches are bolted. However, a couple of large hexes & nuts slotted between plates will help tame the runout on easier terrain on pitches 4 & 5. All belays are bolted.

Take the approach trail to where it meets the dome at Absinthe of Mallet. Follow a trail left, contouring around the dome and working up until reaching the 1st pitch ramp/dihedral (see picture). Note that you can't see the 1st belay bolts from the ground. 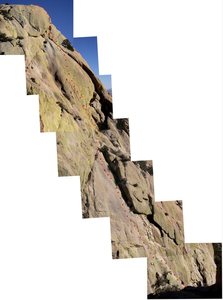 Composite shot of most of Ewephoria from Mutton… 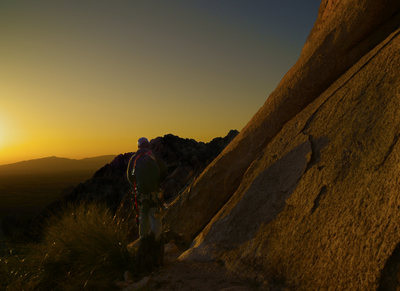 The AZ sunsets never get old. Even if you still… 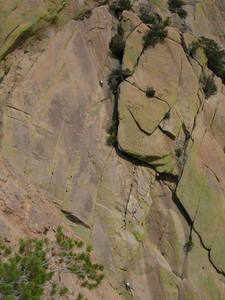 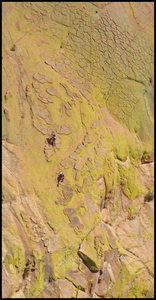 Angelina & Christi amid a sea of chickenheads &… 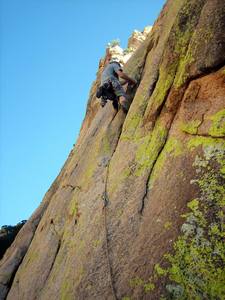 The start of the stellar second pitch 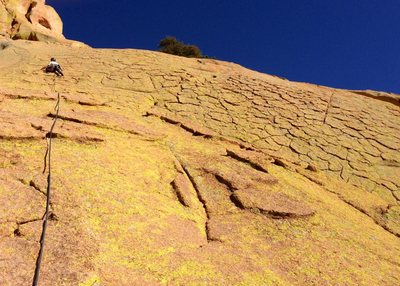 Surfing the stone of the beautiful Ewephoria, C… 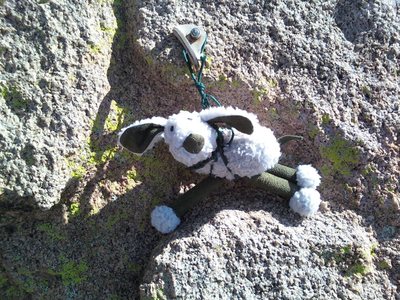 Ewe wouldn't think ewe would run into a solo cl… 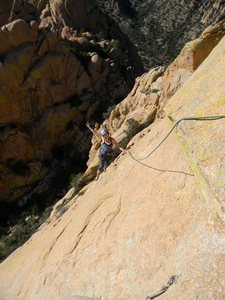 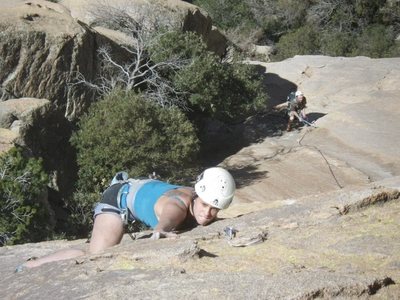 Ashley right below a bit of piece of mind Phill… 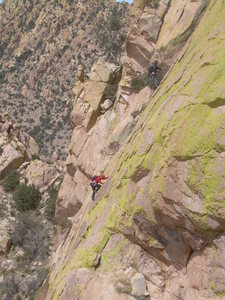 Climbers on the 3rd pitch. 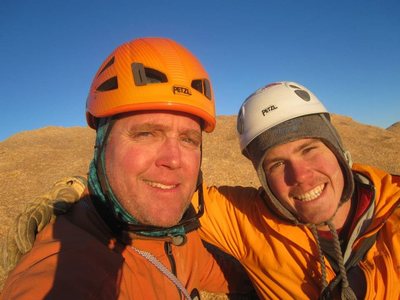 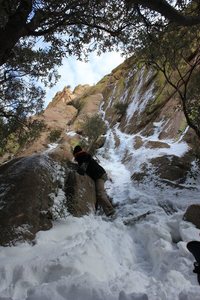 Ewephoria was coated with ice and snow too...