Originally, a scary aid line in the '60s, Fire and Ice became an awesome technical face climbing test-piece for the '80s and still today. Three modern bolts protect three uniquely different "crux" sections. As with other "Roof Routes", F+I is rather height-dependent, and it's interesting to see how different people decipher the moves. I will tell you that you better fine tune your high stepping, mantling and crimping skills....

The route does continue through the roof (slightly down and right) and past the right facing corner at (11+R) by Alec Sharp, using a wild press/stand-up/undercling and jump move to the lip! Stuff a couple cams (#1.5-2 Friend) and layback past a bolt. Head up to the Guenese traverse and an anchor. Rap or continue.

Also, the first bolt was not originally there; for the aid ascent nor for early free attempts (and ground falls).

If you do P1 of Psycho and want an interesting TR: Climb F+I to the second bolt and traverse left diagonally upward to Psycho's anchors (led by Alec Sharp, Slow Dancing).

A good sized flake-hold just before the anchor on P1 broke off, but in my opinion, the climbing has not become more difficult.... That section is still just as tenuous as it always has been, from the right-foot rock over and up! 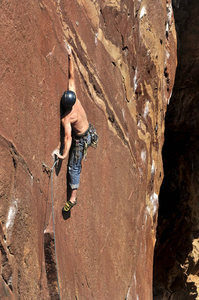 Adam Brink On Fire and Ice. 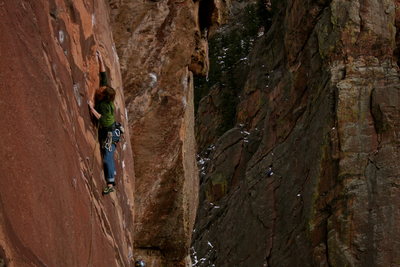 Movin' through the first few cruxes. 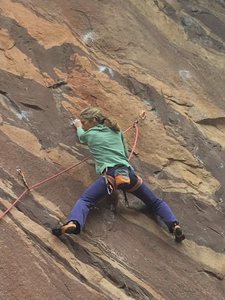 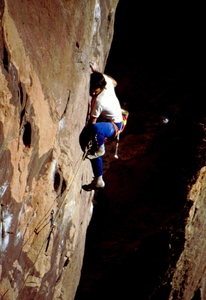 More About Fire and Ice