Routes in The Amphitheater

The following crags are closed 1 February to 31 July:

Per George Bracksieck: The 1st, 2nd and 3rd pinnacles are NOT closed for raptor nesting.

Begin this route from the top of the East Bench (see East Bench Dihedral.) The First Pinnacle forms the northern inside wall of the Amphitheatre.

An old bolt will be evident when looking at the steep face leading up to the summit of the First Pinnacle. Step across the chimney and make a few committing moves up a short pillar. Clip the bolt, and head up the obvious scoop to the summit. I started on jugs to the right, then moved left a bit, but whatever works. Tingly exposure beneath your heels... This would be a 3 star route, but it's only 30 feet long.

Descend to the West Bench via the 4th class West Ridge, or rappel (2 ropes?)

Per Tony B: this is a good route for taking beginners on. Climb the East Bench Dihedral to reach the slot between the first pinnacle and the East Bench. Stem up and right to reach the broad groove which faces SW. Climb up and into this, clipping a single bolt on the way to the top.

(Edit) The old rusted anchor and has been replaced.

It's a nice pitch, and is not too much independent climbing, but still has exposure, good rock, and a nice summit.

Descend by scrambling West and then North or by rapping from one of the several fixed anchors up top.

Eds. This is two submissions onto the original submission's page to avoid confusion.

Standard Flatiron rack, plus one quickdraw.

Per Tony B: a few pieces of this and that, perhaps with a few long slings for slinging knobs and threading holes, and 1 QD for clipping a nasty, old bolt. 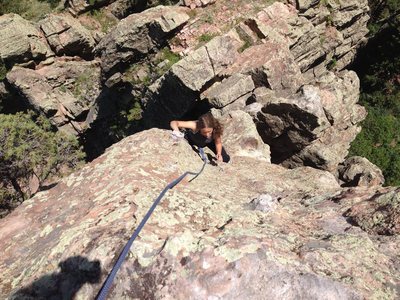