Panther Gorge lies between New York's first and third highest mountains, Mts. Marcy and Haystack. This area hosts some of the most remote backcountry traditional climbing in the Adirondacks. As a dayhike, you’ll amass nearly 19 miles, 4,500 feet of elevation gain over 13-22 hours depending on conditions (yours and nature’s). Once there, the rock quality is excellent with a view that's awe-inspiring.

There are a total of 78 routes (click for spreadsheet of routes) in Panther Gorge; 60+ new routes have been added on Marcy and Haystack during the last few years including 19 ice climbing routes. Rock climbing routes range from 5.3 to .11d YDS with most falling between 5.7 and 5.9. Earlier routes not listed here may be found in Adirondack Rock.

For detailed descriptions of the gorge, trip reports and other resources visit Adirondackmountaineering.com . 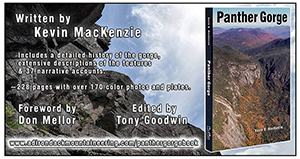 *Mosaic Collection;cid=7C2FB7A58FF611DF - High resolution distance photos or aerials with inset detail photos and route line may be displayed or downloaded. This also includes about 70 slides, but you may display by filename and scroll to the technical lines. Each route begins with panther_gorge. The naming convention generally follows this layout: “panther_gorge_AREA (Marcy or Haystack)_ASPECT_ROUTE NAME.jpg” .

* The Secrets of Panther Gorge in the Sept./Oct. issue of Adirondac Magazine

* A Climbing Experience in Panther Gorge by Nolan Huther

* Needle in a Haystack WI3

Descend south from the Marcy/Haystack col and stay to the right and above the drainage to avoid extensive talus and ledges. You’ll reach the Panther Den, the first wall on Marcy, after about 20 minutes of hard bushwhacking (.2 miles). A 300 foot long glade along the cliff’s base leads to a faint herdpath on the left. The path stays moderately close to the cliffs for about 250 feet until reaching the Feline Wall which is characterized by steep slab with a deep gully to its right. The now intermittent path curves to west over the next 300 feet to the Agharta Wall marked by an obvious cliff below a vast slab. From Agharta continue downhill about 125 feet then make a hard right around a buttress. Bushwhack 200 feet up a drainage stream to the Huge Scoop—the last of Marcy’s north-end climbing walls.

Chimney Wall (named in 2017): Continue on contour about 700 south to a glade below the Overhang Slide, a slide with 2 distinct roof systems. Look for the huge chimney on a cliff uphill. Bushwhack up to a gully and follow to wall.

Descend south from the Marcy/Haystack col and stay to the LEFT and above the drainage for everything down to the Ramp Wall. Locate the V Wall by following the "Marcy's Cliffs" herdpath to the Agharta Wall and bushwhacking to a large boulder at (N 44 6.7511’ W 73 54.4918’). Follow the V Wall drainage stream to its base. Expect to spend 60-90 minutes navigating through moss-covered talus, blowdown and dense tree growth.

*From Adirondack Loj: Park at the Loj (parking fee applies) and hike 8 miles to 4-corners between Mt. Skylight and Mt. Marcy. Descend 1.2 miles into Panther Gorge.
*From Elk Lake: Park at the public parking lot near the end of Elk Lake Road in North Hudson. Follow the Elk Lake to Marcy Trail 9 miles to the south end of Panther Gorge.

Several campsites and Panther Gorge Lean-to make excellent sites to overnight--probably my favorite area to camp in the High Peaks.

*Bear Canisters: Required from April 1-November 30.
*Lean-to Rules: Lean-tos mentioned are built to accommodate 8 people. You are OBLIGED to share them if another group comes along.
*Fire: No campfires allowed in the Eastern High Peaks.
*Check current camping regulations for any restrictions. 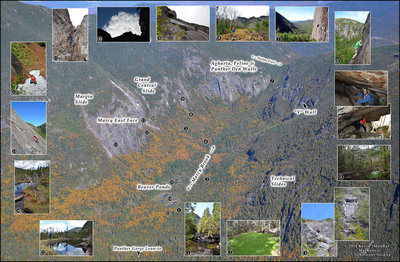 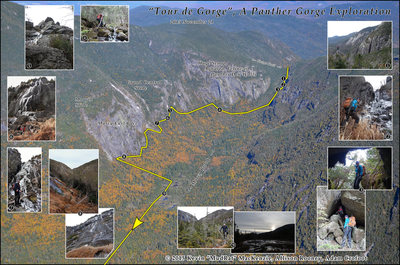 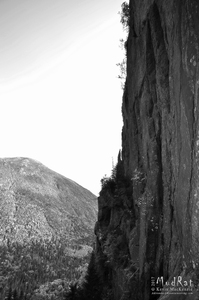 All Photos Within Panther Gorge