P1 30m NEI 1/2 Climb easy slabs/slopes to the base of the steep ice on the LHS of the rock buttress.

P2 55m NEI 3 Climb rambling steps of ice to mellower terrain above where rock outcroppings may offer shelter and a belay on rock gear.

P4 35m NEI 3- climb rambling steps to the trees above. (Same as Agharta)

Descent: rappel off scrubs, V-threads and/or rock outcroppings. Alternatively, parties could opt to bushwack upwards to the Marcy trail.

Name: Agharta is named for the city rumored to reside at the core of the earth - but we found Just Nickel and Iron on our excursion to the Aghata wall.

(Same approach and start location as for Agharta)

Hike to the Marcy/Haystack col from the Garden parking lot, passing John's Brook Lodge and Slant Rock (4 hours).
After bushwacking 20 minutes into Panther Gorge from the Haystack/Marcy col and reaching Panther den, follow the rock faces south past the Feline wall to the big obvious face of Agharta.

From the base of the climb, only the first 3 pitches are visible.

A standard rack of ice screws and cord for V-thread descent.
If the ice is thin/delaminated, as it can be when the top pitches are sun-affected, stubbies and rock gear could be helpful. 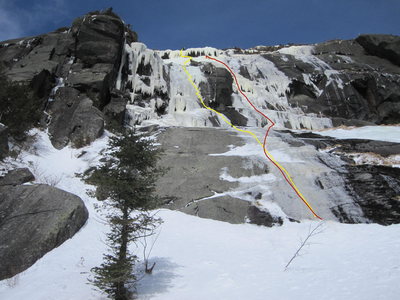 More About Just Nickel and Iron