The Near Trapps Rock Climbing

Areas in The Near Trapps

Access Issue: Closure! of the base trail at Eenie Meenie / Moe Details

A private party who owns a short section of the Nears cliff has closed his land to climbers for geopolitical reasons.

This means for routes from the beginning of the Nears to Eenie Meenie or Moe, you'll approach as usual, from a trail heading towards the rock between the steel bridge and the Overlook lot.

For routes past Moe, you'll need to slingshot around the cliff. Walk south on the carriage road from the steel bridge, then turn left at the second trailhead -- the Millbrook Ridge Trail (blue markers). In about 15 minutes, you'll come to an intersection where blue markers meet red markers, and a new, orange-blazed/staked trail heads east and down a slope, depositing you right at the Far End of the Nears.

This overall approach takes about the same time to approach the far end of the cliff than it does to hike all along the bottom of the Nears.

Easy access, classic climbs, and easy descents make the Near Trapps a popular area at the Gunks, second only to The Trapps in climber visits. The cliff is 30' to 200' feet high, and sports almost 200 routes. The most popular area is the north end (closest to the parking lot), with many classic routes one after the other. The middle section of the cliff has loose rock and not many good climbs; be careful of rockfall in this area. More good climbs are found at the far (south) end of the cliff, a 20-to-30-minute hike from the parking lot.

Within these areas, learn to recognize the following routes as visual anchors (copies of the pictures are in this section, below) and they will help you to find the routes around them. Each of these routes has a picture in the description, and is used in other route descriptions as navigational anchors.

Disneyland. In this first section of the cliff, routes are densely packed. Many routes start in corners and aretes, and a trick to finding them is to look backwards over your shoulder. This area of the cliff is popular, so there are often people here to help you find what you're looking for.
Birdland marks the end of the 'gym' of dense routes - after Birdland, routes are a bit more spread out and sometimes harder to spot.
Up Yours is a striking right-leaning crack and ramp.
Catnip's right-facing corners and the crack of Coyote Crack are just after the closure and easy to spot. Routes are less dense around here.
Easter Time Too is a very obvious right-leaning hand and finger crack that you'll need to climb. It has a dozen or so routes near it.
Animal Farm (not entered yet) is a huge, orange corner ~300 feet left of Easter Time, on the left side of an ampitheatre. Routes around here are very spread out.
The White Pillar is an unmistakeable detached block ~100' high with a beautiful hand crack on its right side.
King of P, a very easy lightning crack (fissure), marks the left side of the Williams Wall, which has a density of moderate slabby routes.
Void Where Inhibited's left-facing corner and the deceptively easy-looking crack of Void Where Prohibited are on the front face of the Void block, a 100' high block, at the Far End of the Nears.

A private party who owns a short section of the Nears cliff has closed his land to climbers for geopolitical reasons. This means for routes from the beginning of the Nears to Eenie Meenie or Moe, you'll approach as usual, from a trail heading towards the rock between the steel bridge and the Overlook lot.

For routes past the closure or Moe, you'll need to slingshot around the cliff. Walk south on the carriage road from the steel bridge, then turn left at the second trailhead -- the Millbrook Ridge Trail (blue markers). In about 15 minutes, you'll come to an intersection where blue markers meet red markers, and a new, orange-blazed/staked trail heads east and down a slope, depositing you right at the Far End of the Nears.

This overall approach takes about the same time to approach the far end of the cliff than it does to hike all along the bottom of the Nears.

Summary of the issue and history from Rich Goldstone's post to a Facebook group: There are five parcels underneath the Near Trapps that abut the cliff, which means the cliff face is part of those parcels, and the trail at the base crosses private land.  In fact, the deeds tend to say "to the highest point of land" and that means that portions of the Millbrook Ridge trail are (or at least were) also on private land.  By and large, the land owners haven't cared about climbers walking below the cliff or climbing on it.

The gully between the Nears and Bayards that people go down is also private.  The South "wall" of that gully (on the right of descenders) is on another parcel from the gully,  and that wall has been posted for quite a while.  The owner of that parcel sold it pretty recently.

So the reality is that climbers traverse quite a bit of private property when they climb on the Nears, and this is true whether or not they circumnavigate and descend.  But as I said, so far the landowners haven't found climbers to be a problem.

Except, really, for one.  A land owner got into a dispute with the Preserve and became very anti-Preserve.  As part of a program to pressure the Preserve, he persuaded one of the owners of a parcel that abuts the cliffs to post their property.  I don't know their reasoning or politics.  I could be wrong, but I suspect that the parcel owners themselves have never even been up to the part of their property that is at the base of the cliffs, and that the aggrieved individual, after getting permission, did all the posting himself.  Although there are quite a few contiguous private parcels that climbers could in principle be banned from, that one strip is all that is posted.

I think the situation is pretty clear from the attached map from the Ulster County Parcel Viewer.  Preserve lands are cross-hatched, and the posted parcel is outlined with an orange dotted line.  As you can see, the posted parcel is not the Clif Haus parcel, which is the one two down with the big pond.

One message is that we climb on these lands at the discretion of the owners, and that things could be far worse.  As at Millbrook, it would be a really good idea to keep all noise to a minimum, and most especially refrain from loud vulgarities.  The cliff acts as a reflector and the sound carries to the homes and establishments below.  Don't give them a reason to rethink their laissez-faire attitudes!

PS: I haven't posted the names of either the "aggrieved individual" or the parcel owners who have posted their land.  This information is a matter of public record, but I see no purpose and some potential harm in identifying them here.  I hope that if anyone comments or makes corrections to this post they will leave any individual names off.

From New Paltz, take Main St. (Rt. 299 West) to the T-junction with Rt. 44/55. Go right, up the hill. Pass the Mohonk Preserve Visitor's Center and continue past the hairpin turn up to the top of the hill.

Park at the West Trapps Lot, and walk up to the steel bridge. It is not recommended to park at the "30-minute" lot on the left at the top of the hill, unless you'll only be staying less than 30 minutes; tickets are $125. From the steel bridge, instead of going up the stone stairs to the carriage road, walk along 44/55 itself back towards town for a few hundred feet, and also cross the road (carefully). Look for a foot trail that heads south from the road, just past the road cut and before the guardrail. In a few hundred feet, this trail brings you to the base of the Nears, just to the left of Kansas City.

For mobile devices, check out the Gunks+ app, which has a guide to Nears Routes and many more.

Dick Williams' The Climbers' Guide to the Shawangunks: Near Trapps -- Millbrook is purple, and was published in 2008 by the in-house Vulgarian Press. Find it at Rock and Snow;s-Guide-to-the-Shawangunks%3A-The-Near-Trapps-and-Millbrook/. In addition to updated descriptions of old routes, Dick and company (often Annie O'Neill) went on an FA spree in the mid-2000s; most if not all of those new routes are described here.

Other editions include:
Shawanagunk Rock Climbs: The Near Trapps and Millbrook. Dick Williams, American Alpine Club Press 1991, aka the "black Dick".

The Gunks Select, Dick Williams, Vulgarian Press, 1996. Contains the best routes at the Trapps, the Near Trapps, and Skytop. (Out of print).

The Gunks Guide, Third Edition, Todd Swain, Falcon Press, 1995. All-inclusive guide to The Trapps, the Near Trapps, Skytop, and Millbrook.

Shawangunks Rock Climbs: The Near Trapps and Millbrook, Dick Williams, The AAC Press, 1991. Part of the three-volume "brown Dick" set. Contains all the Near Trapps climbs, as does Swain's guide.

Classic Climbing Routes at The Near Trapps

Mountain Project's determination of the classic, most popular, highest rated climbing routes in this area.
More Classic Climbs in The Near Trapps » 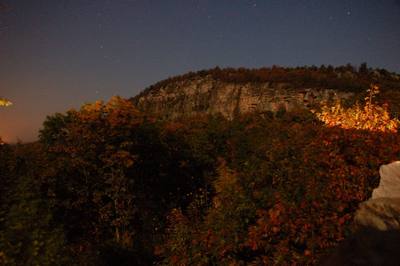 Near Trapps at night. 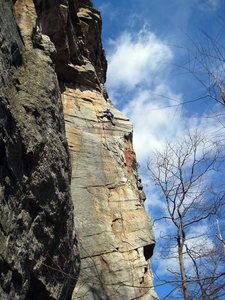 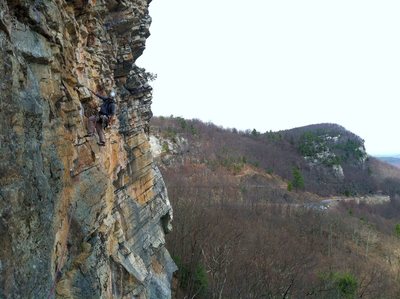 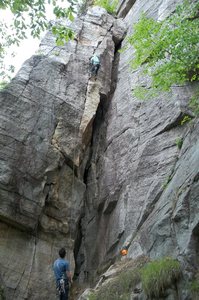 Climbers on Harvest Moon. White Pillar is in t… 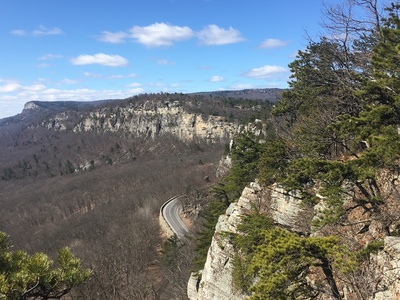 The Nears with Millbrook in the distance from t… 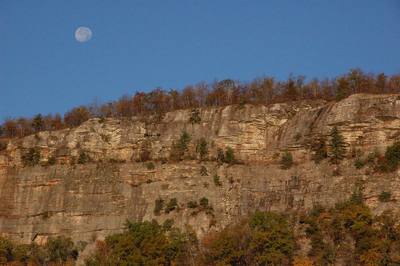 Moonset over the Nears 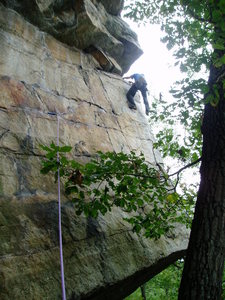 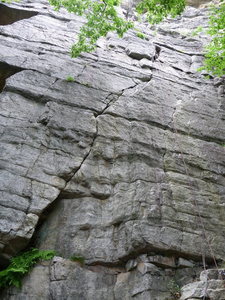 Eastertime Too is the most obvious, right-leani… 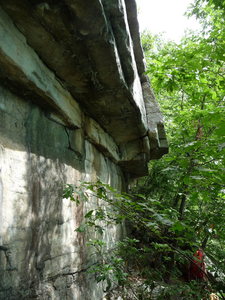 The Right Void (Void where Inhibited) 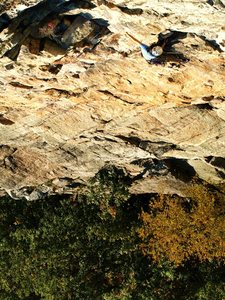 Don't recall the name of this climb... it's in… 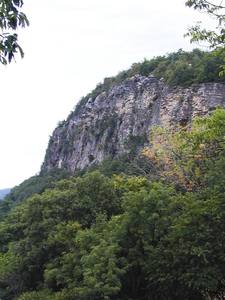 The Near Trapps, from the Carriage Road at the… 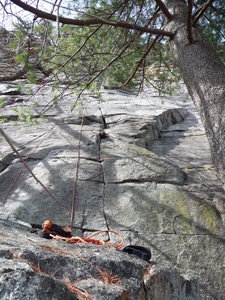 All Photos Within The Near Trapps


More About The Near Trapps

GunksApp: Nears Routes
GunksApps: Fracchia, Igoe,…
For mobile devices, get the Gunks App Both iPhone and Android versions are available.