Fritz Wiessner, 1938, made the best attempt before Bedayn and Arnold's success. After the highest attempt yet, Wiessner is famous for saying it would be: "...merely an affair of driving iron in the virgin rock!" (The 2010 movie, North Face, about the Eiger in 1936, is accurate for the rack and other gear of the day). But the story twists, Bedayn and Arnold found the upper headwall to be well within Wiessner's ability. (Climbing in North America, Chris Jones, 1976)

During the 1970's, I often would hear climbers proudly say: "We did Wiessner's!". The guidebook used in the 1970's gave the route no name at all (Bill Putnam, 1971). Climbing in North America states that the successful team "quickly concluded that Wiessner's route offered the best chance for success" (Jones, 1976). So the route was named before it was climbed.

Bill Putnam's 1971 AAC guide gives the route 5.6. The next book published, Bugaboo Rock rates it 5.6+. I've met people on the summit who thought the Vein was a sandbag.

The Association of Canadian Mountain Guides has a forum for guides to report current conditions in both the Canadian Rockies and Columbia Mountains: acmg.ca/mcr/archives.asp

The climb can be separated into three sections; the initial five pitches up to the Wiessner Overhang Traverse, the six pitches up the left side of the snowpatch that is the mountain's namesake, and the final three crux pitches up the summit headwall.

From the notch, a couple of easy pitches lead to a large corner, the first 5.4 bit. The corner faces left, away from the hut and the low angle left wall is climbed. Next, a 5.4 spur is followed to a stance below the Wiessner Overhang, which is not climbed directly. Move right to the 5.5 hand traverse used by Wiessner to dodge the roof and gain the easy slabs next to the snowpatch. The start of this bit is shown with orange dots on Kevin Crag's shot of the south face.

Several easy pitches parallel the left side of the snowpatch, then move climbers right (north) a couple hundred feet, eventually passing a large detached flake. The 5.9 Direct heads left from this flake.

The first pitch up the headwall is a 5.4 chimney followed by a hand traverse left to a belay below the Vein Pitch.

(The Vein is actually an aplite dike. Miners call dikes veins and aplitic means the crystals in the dike are smaller than in the surrounding granite, relatively fine grained. The famous Snake Dike, 5.7, on Half Dome is a famous example of aplite dike climbing.)

For the Vein Pitch there is a choice: either a 5.6 offwidth or the fine climbing on the vein, rated up to 5.8. There is consensus that the route is not done unless you do the Vein. After the crux, hopefully still protected with good fixed pins (in once-virgin granite), move left to rejoin with the offwidth line and stretch the pitch to a belay on flakes.

An account of both cruxes, the Vein and subsequent traverse, by Jack Arnold is found at the bottom of this page.

The third and final summit headwall pitch starts by climbing up to a leftwards traverse. The traverse leads to a zig-zag crack, 5.6. The pitch ends with a 5.4 ramp crawl right to the belay spot. One final easy lead to the top.

1. The original descent was to reverse Weissner's route. This is what the American Alpine Club Climbers Guide to the Interior Ranges of British Columbia recommended: "On descent, one long (150') rappel from below the summit ridge will reach the chimney (on Wiessner's)." (William L Putnam, 1971) By 1974, most parties were rappelling the West Face, but not everyone.

2. The most popular and best way off the South Summit of Snowpatch Spire is to descend the backside (west).

First, rappel the Kraus-McCarthy route. There are bolt anchors every 30 meters; Either four 60 meter rappels or eight 30 meter rappels. The 30 meter way can be stretchy.

Second, walk north to Bugaboo-Snowpatch Col and descend via rappels or down-climbing the 40 degree snow or ice. There is more than one bolted route down the "couloir". Should be a small sign to help find the anchors. The last rappel often requires two ropes to get past the bergschrund. Summer of 2009, extreme melting made the col too dangerous to use and a new way started to get used.

3. The Pigeon-Snowpatch Rappels are now an alternative to the Bugaboo-Snowpatch Col. Unlike the col, this way does not get climbed. If your staying at Applebee, then this way home is much longer than the col.

Next head south on snow, staying close to the rock of the Snowpatch's lower Southwest Ridge. A large cairn on the rock marks the anchors. One guide's report mentions having to cross 25 degree bare ice to get to the anchors. His party got across late day without crampons but he didn't think it would have been doable, sans crampons, when really frozen.

Several 30 meter rappels on rock, close to an icefall, end on the Bugaboo Glacier.

Rope up for the hike down the glacier, notorious for crevasse hazard. Some have avoided late season crevasse hazard by side-hilling on the unstable moraines instead. They admitted to a preference for rockfall hazard instead of deep icy holes.

Finally, rejoin the approach hike to return to the Hut.

My guess for your rack is to bring a wide range on the rack, but not too many doubles. Lots of slings too. This route has been done a lot with a small rack.

The old summit anchor was a 20 kilogram flake, about 80 centimeters in length, tied off and laid across the top of the Kraus-McCarthy chimney, where it splits the flat summit ledge. Before weighting the very directional and portable anchor, climbers would have to squeeze down into the chimney. Once under the sketchy flake and on rappel, the security of the chimney was replaced with 240 meters of exposure. The next anchor was a tied off pancake flake, somehow wedged between the walls of a 90 degree corner.

Thanks for the anchors!

MORE BETA FROM THE PAST

Jack Arnold's description of the crux:

"On a very smooth, vertical face and, running upwards across the face at a seventy degree tangent, was a quartz vein with small knobs protruding. None of these knobs extended more than an inch and most of them considerably less. Raffi, placing pitons in the vein, led up on these small knobs, to where he was stopped by a large overhang. This necessitated a traverse left on, purely on the arms, to the base of a large chock-stone where this pitch ends. On following, I found balance on these knobs very critical and the arm traverse so difficult, due to the character of the sloping hold, that the only way I could get adequate purchase was to balance with my right fore-arm and, with the left hand helping, inch my way across. The entire pitch is done under extreme exposure and I dare say the next party will find it interesting indeed." 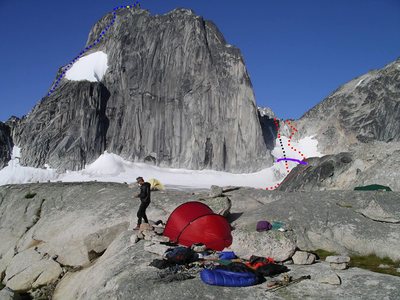 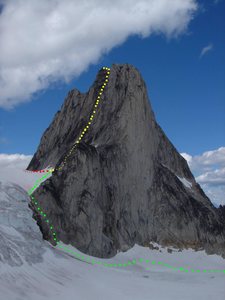 The 5.4 dihedral below Wiessner Overhang. 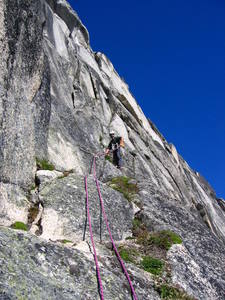 Darren heading up into the headwall. 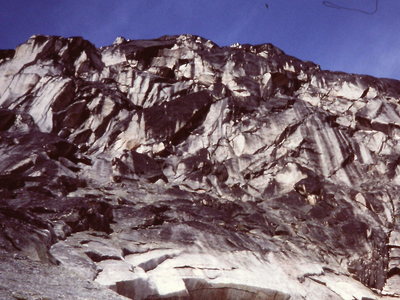 Cropped photo of "Headwall above the snowpatch" 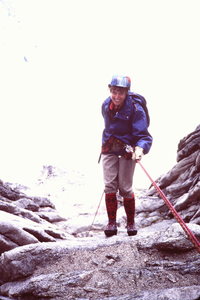 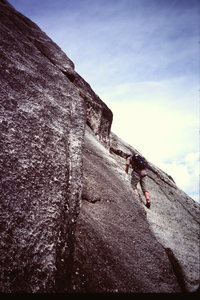 I believe this is the start of the "5.5 traverse" 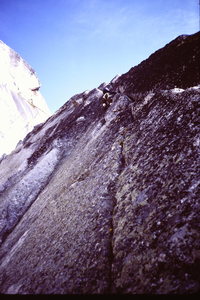 Continuing up the corner system..now roped 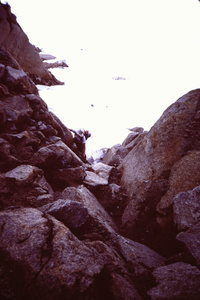 Looking down the 1st corner from the glacier (r… 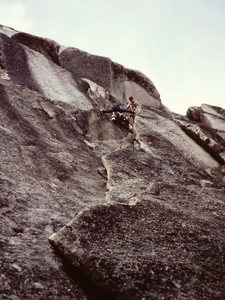 A party ahead of us on the headwall (above the… 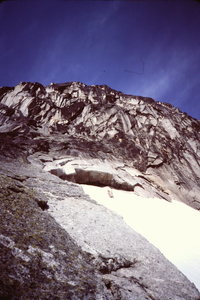 "Headwall" above the snowpatch...the route goes… 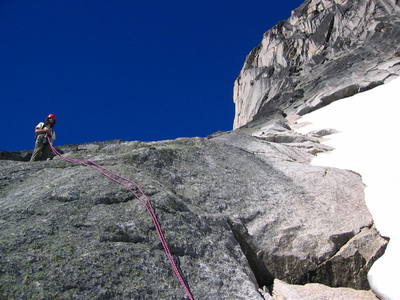 Alic heading by the snowpatch on the 3rd class…