Ted Davies and Pat Derouin may have found the one of the easiest and shortest fifth class routes to the summit of Snowpatch Spire. Davies, Derouin, and their friends reported often in the Canadian Alpine Journal during the early 1970's. Their articles had some of the best pictures and information available for the Bugaboos, Vowells, Sir Sandford, The Adamants, Blackfriar, even the Remillard Group.

Climbing begins with roping up for both the Snowpatch Glacier crossing and ascent to Bugaboo-Snowpatch Col. From the col, follow easy neve all the way to the southern end of the west face. Finally, scramble up to the start of the route.

Summer of 2009, Bugaboo-Snowpatch Col became too dangerous to use. If that ever happens again, then getting to the West Side of Snowpatch becomes extraordinarily difficult. I would try climbing Pigeon, via the Bugaboo Glacier approach. Afterward, do the Southwest Ridge Direct on the way to the Pigeon-Snowpatch rappels.

The Southwest Ridge Direct and Surfs Up share the first three pitches. Mountain Project contributor, Dr. Evil, posted a photo of the start on the Surfs Up page. I added marks for this route and put a copy in the photo gallery below.

Pitch One, 5.7, starts with low angle friction, climbs over fin/bulges, and ends on a ledge with a spike that can be slung for rappels.

Pitch two, 5.7, starts in a left facing and left leaning v-corner, followed by flared cracks, ending at a smaller stance with rap slings.

Pitch three, 5.8-, continues up the same cracks, then pulls a hand crack bulge, just before the belay alcove. This is where Surfs Up traverses right.

Pitch four, 5.easy, takes a left up the major weakness and ends on a blocky ledge.

Pitch five, 5.8+, avoids the huge chimney of Killer Chipmunks over left. Instead follow smaller, easier, corners and cracks. There is a crux roof blocking progress along the way. I'm pretty sure we ran the 50 meter rope out all the way to a ledge on the summit ridge. You may notice that does not fit the Bugaboo Rock topo. There could be another belay along this stretch perhaps.

From the rappel bolts, there still a short pitch of 3rd class to reach the true summit. If the last summit slabs are snowcovered, then a tricky 5.5 can be done, staying west of the wetness.

First, rappel Kraus-McCarthy using bolted and chained anchors. Either four 60m rappels or eight 30 meter rappels. Some of the 30m rappels are a close cut. Then it might be necessary to get the rock shoes wet re through a bit of snow back to your approach shoes.

A rack with a wide range is good. Smaller cams might help with sparse pro of the first pitch. Big cams too, at least up to #4. I'm not afraid to bring my #5. Lots of runners too.

For the glacier travel, an axe, boots, crampons to leave at the base. How much crevasse rescue gear you take is up to you. There is crevasse hazard on Snowpatch Glacier, The Vowell Neve, and Bugaboo Glacier. 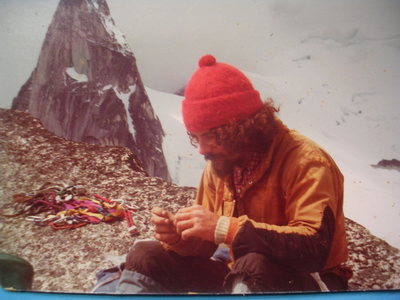 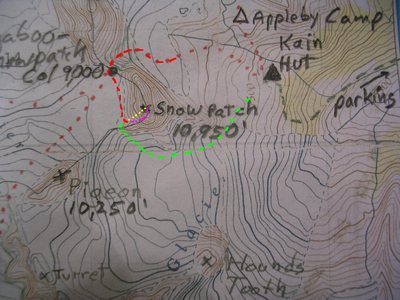 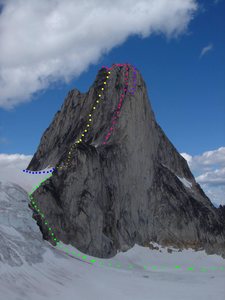 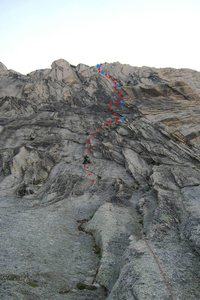 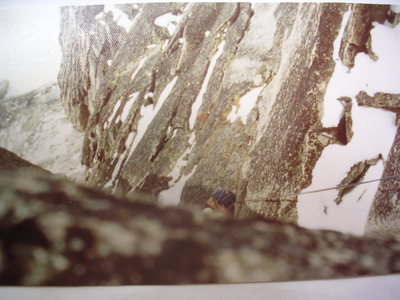