Approach Shirt Tail Peak to the left, as for Gambit, but continue well left of that route, to the West side of Shirt Tail, above Rincon Wall. Go 20 meters or so up the gully and look up to a large, dark, West-facing wall. Scramble up 20+ meters of easy rock to reach a tree below and west of the West-facing wall, and set a belay. King of Pain and Mrs. Clean Gets Down both ascend the flat wall above.

The start for both routes is the same: climb up to the left of the obvious slot, placing a nut or two on long slings, then at a hanging flake, step to the right across the slot to the right into a wide stem, and get up onto the main wall. 2 small cams can be placed here. Then move up into an odd pod. For Mrs. Clean Gets Down, head up and right towards a bolt on the right. For King Of Pain, head up and left, with good undecrlings left, under a long flake. The moves to reach the first bolt are pretty hard (5.10). Climb upward with increasing difficulty until the 3rd to last bolt, an old "ring bolt" near a mono (old bolt hole?) and a nub. Bump slightly left to stand on the nub and look the crux in the eye... for a while. Up and right is very hard, and it took me several falls to latch a move in that way before peeling off anyway and discovering that the route goes left then up (confirmed later by the topo). The move right is much harder. Finish on 5.11 climbing to a 2-bolt anchor with cold shuts.

There is a 3rd bolt 6' back and left to back up a TR anchor if desired. Rap off to descend.

Note: these climbs are VERY hard in the afternoon sun.

You can TR this from anchors as reached by a scramble from Gambit or Tiger Balm Arete, or from Mrs. Clean Gets Down. The bolts on this route are mostly good, but leading requires some heady moves some distance from so-so gear to get to the first bolt, and clipping from the given stances may be difficult for most people. Gear: some small to medium stoppers, some hand-to-fist sixed cams, and a two 0.3" TCUs will get you onto the vertical face. One more 0.4" TCU might add a piece in the underclings to the left before the first bolt, but I did not place this, so I am not sure it would be good. 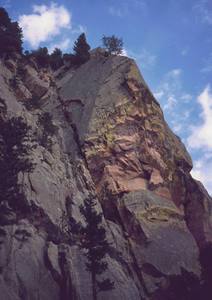 More About King Of Pain