This route is really good, but in years of looking and asking, I have never seen or heard of anyone doing it. It is a worthy route and the best of the ones I did on Shirt Tail this weekend. A few spots of iffy rock prevent me from giving the 4-star rating. Still, it was a great pitch. The route ascends the smaller, right-most arete of the main wall of Shirt-Tail Peak, well right of Gambit, and just right of the huge Mountaineer's Route dihedral. The climb takes a short crack system (10M) up to reach a thin dihedral nestled into the arete for 50M more, then to a low angle finish. The route is striking and unmistakeable.
Double Life (bomb) but the system heading up and left to the steep wall and corner, G.P. Direct, is a great route. It may be advisable to set the belayer back behind the tree from the climber, in case any loose rock should happen to come off early on the climb.
Mountaineer's Route (presently no top anchor) or hike to the West and rap as from Gambit.

A standard Eldo rack including a set of stoppers, with extra medium, a set of cams from very small to 3". An extra fist-sized piece could be good, and a 4"+ cam might be nice at the belay at 70M if you are squeamish, but not at all necessary. Lots of slings are advisable (10 to 15 slings). 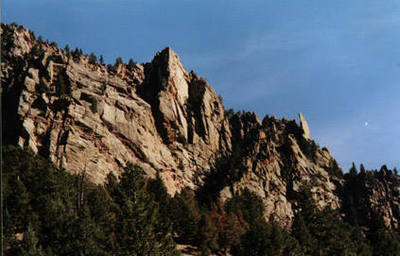 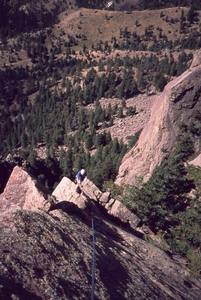 Joseffa Meir follows up the second pitch of 'G.…