This is a nice alternate start to Gambit. It has great hand jams with good rests on vertical rock. Begin left of the regular start of Gambit or climb the first 30' and traverse left, aiming for a big tree on a ledge. The lower half is a bit chossy, so be cautious of you and your belayer, and wear helmets.

The first pitch of Gambit follows a large, right-facing corner. Sorenson Crack is to the left of it (around the arete). It's the clean hand crack on the right side of the huge block from the first pitch of Tiger Balm Arete.

SR and an optional #4 Camalot. 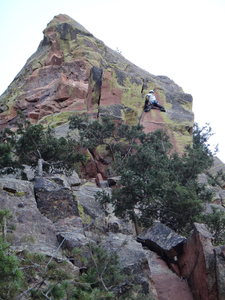