This is an excellent route but unfortunately bears the scars of one of Boulder's first bolt wars. It is also closed from Feb 1 to July 31 due to raptor nesting. The protection on the first pitch consists of three bolts with nuts only (no hangars) and a few stopper, RP, or tiny cam placements on the upper half of the pitch. I am not sure if the nuts on these bolts can be unscrewed, but if so, it would be great to put hangars on these bolts (or much better, replace them entirely). [Replaced in 2014 - see comments.]

The route begins at the highest saddle west of the Matron, and follows the arete between the North face and SW Faces, except for deviating onto the SW face around an overhang at the crux. It is better to approach via the North side of the Matron.

Climb up the arete to the overhang, and clip the first bolt. This area is a shameful "bolt graveyard", containing six(!) other bolts that have all been chopped. Climb up the SW Face, traversing left to clip a second bolt. Now move up and left back to the arete (also 5.8).

The rest of the first pitch is now much easier and follows the spectacular arete to the rappel anchor at 80'. There is one more hangarless bolt in this section, as well as a few places for stoppers or small cams. This first pitch is easily toproped from this anchor, if you are coming down from climbing another route on the Matron.

The second pitch to the summit is easier (about 5.6) and offers excellent protection through the crux. Move left and up through a broken area to an eye bolt 130' off the ground, then move up and left and skirt the summit overhang to the right. This area can also be reached by stepping right off the belay and heading straight up some easy cracks. Clip 4 ancient pins as you skirt the overhang (crux). This section appears harder than 5.6, but features always appear to make it easier.

RPs, stoppers and cams to 2" (a wrench and bolt hangers may be useful if you have them). 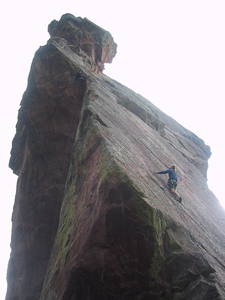 Studying the crux with only psychological pro b… 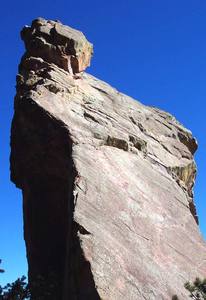 SOME of the chopped bolts on this route- I coun… 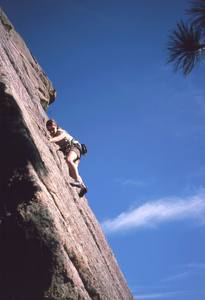 Joseffa Meir follows up the West Face of the Ma… 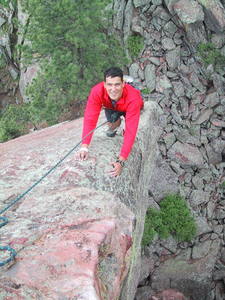 This climb is a lot friendlier on toprope. 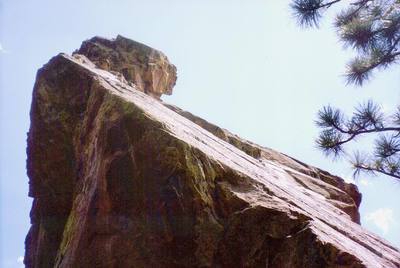 West face of the Matron