The name was inspired by Noam Chomsky, who questions whether the "human experiment" will actually work out on planet Earth, or whether we're all doomed to extinction... time will tell.

Start a few feet right of the very lowest portion of the south face of The Matron, which is on the far east side of the south face, near where the trail pops up to the formation. Climb interesting, alligator-skin flakes (easy 5.8) for 30 feet to a big ledge and the first bolt. Make a 5.10 move or two to a stance, clip the second bolt, and fire up cruxy moves (11c) to the 3rd bolt. Climb through another 5.11 section to a good stance, and place a bomber medium nut (about 1/2-inch) before arriving at the 4th bolt a few feet higher. Make awkward 5.11- moves past the 4th bolt, place an optional #0.75 Camalot, then go out the right side of the large flake, placing a final green Alien or similar (if needed) past 5.8 moves to the anchor and a decent belay ledge.

Pitch 2 is the business and is one of the most unusual pitches I’ve seen in the Flatirons. Use a small nut or purple (smallest) Alien if desired to protect some 5.9/10 moves up to the first bolt above the pitch 1 belay. Clip that bolt, and bust out 12- moves to the next bolt. Continue up to a notable, sloping ramp/feature we call “the Chocolate Sidewalk”. Clip bolt #4 with a long draw or sling, and start “walking” along the Sidewalk, heading up and left for about 60 feet to bolt #11. One might also feel like they are "surfing" the SIdewalk as the entire feature is shaped like the face of a breaking wave. This Sidewalk section has many 5.12 bits with a few rests and lots of the moves are somewhat cryptic and devious. It’s mostly vertical (or lower angle) climbing on decent crimps and small footholds… bring your best face-climbing shoes for this one. Use of longer draws or slings on bolts #8 and #9 will help with rope drag, and also use a longish draw or sling on #11 as the line busts straight up from there. Climb up a steep section past the last 3 bolts, over a thuggish roof feature to a good stance and 2-bolt belay anchor. While no move seems harder than 12+, this pitch probably warrants a 13- rating for the sustained, intricate, and technical climbing involved. Kinda bizarre and hard to rate, so really interested to see what others think there.

The third pitch follows a clean slab (“the Red Ramp”) for 3 bolts on 5.10+ or 11- crimps and thin feet. From there, the line gets steeper and busts through a roof feature, 11+. Clip one final bolt and head to the rap anchor. Take a short rap (50 or 60 feet) down to anchor #2, then a 70-meter rope will get you down to the ledge at the base of Warlocks, where you can scramble west to the ground from there. Note that a 70-meter rope BARELY reaches this ledge, and definitely doesn’t reach the ground, so be careful.

I was tempted to give this a 4-star quality rating but realize that it's old-school-type climbing with some really weird movement... some people used to overhanging thug-fests may not appreciate this rig. Curious to see what folks think about this one?

P.S. note that this formation closes February 1 to August 1 for falcons, so the prime access period is roughly late-September (warmish) through the end of January (often perfect)....

Located just slightly downhill from where the main trail meets the south face.  Its also maybe 4-5 yards east (right) of the lowest toe of the south face.  Look for the scaly reptile-skin plates reminiscent of Thunder Ridge and head up... the first bolt is 30-35 feet off the deck, just above a ledge.

Bring 14 draws and/or slings, plus optional 0.5-inch nut, 0.75 Camalot, and green Alien for first pitch. A small nut or purple/black Alien could be used on the 2nd pitch before the 1st bolt. A few extra biners/slings will also be useful for tying in at the belays. 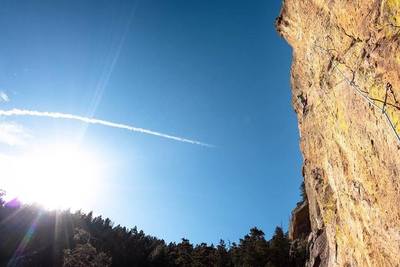 Matt Samet on the crux pitch. Photo by Chris… 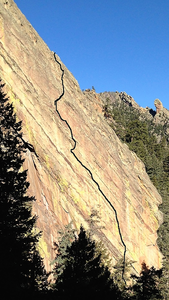 A rough topo showing the upper first pitch and… 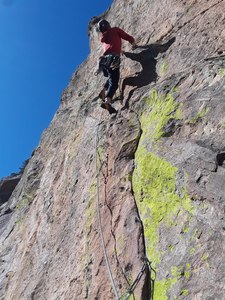 Past the first crux on pitch 2, just below the… 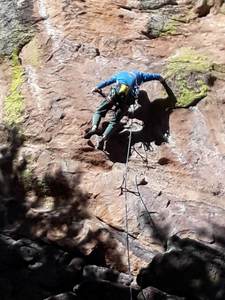 Bret working through the crux section on the fi… 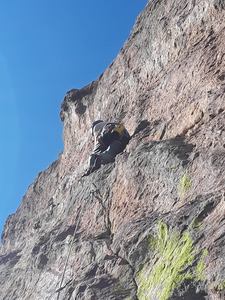 More About The Human Experiment