Quiche on a Leash

Climb the left crack in the left-leaning, left-facing dihedral, eventually merging with "Real Men..." and tunneling through the needle's eye.

In March 1978, I was at the Matron with Andrew Shepherd and Bob Forbes. I noticed this line and wanted to try it. While one belayed, the other took photos with my camera. I onsighted the route, finding no in-situ pins, bolts, or slings on the route, nor at its top. Neither Andy nor Bob could follow past the first crux. Some four years later, other climbers claimed the FA and named the route.

During most of my long climbing career, I just went climbing, often leaving no trace, and never bothered to name those experiences or transmit those to guidebook authors. Until a few years ago, I never bothered to publish climbs I did, even after someone else claimed a FA of the route long after I climbed it. Now, MP makes posting routes and comments easy.

It shares opening and closing sections with "Real Men...." This is to the left of the standard North Face route.

No pins or bolts were on the route in 1978. My rack was composed of stoppers and hexes. Today I would take a set of wires and cams. 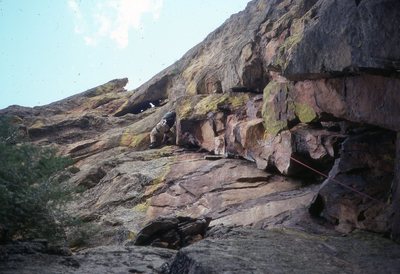 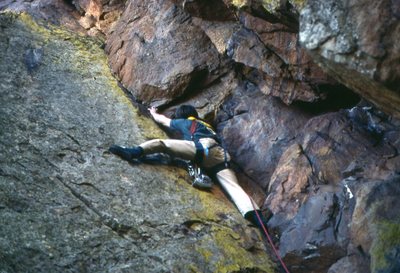 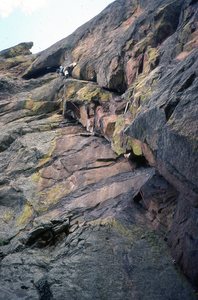 More About Quiche on a Leash