This route is the evil twin of the Flatirons classic, Death And Transfiguration. The route is similarly long, steep and wild. Were it on better rock the route would be a classic, but it isn't. 3-star moves and position around some poor quality rock in several places.

This climb starts as for "Quiche On A Leash" on the shady N. face of the Maiden. Reach the N. Face via a trail below (to the east) of the rock and head uphill on the North side until a massive, left-leaning, overhanging, broken dihedral is seen. Perhaps 20' up the route there is a ledge to the left and a 10' length of purple webbing hanging down from a fixed pin, as if it were an extended draw to clip; its quality is very, very dubious. (it was already very dubious in 2003) The corner ascends to a needle's eye near the top of the wall, through that and to an anchor/rap station up and left of the top of the route. This is all perhaps 200' from the lowest/East-most edge of the N. Face, or 100' East/below the Standard N. Face route.

Quiche On A Leash goes up the initial dihedral to reach the ledge, passing a 10b layback move with slick feet. From this ledge the ORIGINAL climb (QOAL) walks out left and face climbs back to the dihedral and then up and on, all the way left to the tree below the needle's eye. Refer to Rossiter's Flatirons climbing book.

Rather than do this, place a TCU in a diagonal seam in the left-side wall at waist level (even with the purple webbing's end) and start heading up and right, into the right-most corner, not the left.
Remain there, stemming back and powering up though an initial bulge to reach the right side of the large dihedral. There is a little bad rock in this section, although none of the moves require using it for holds. Continue up to where the pin is anchored and place some good small-med stoppers, then continue up the right most of the twin corners, going through bulge after bulge, trending left with each one as the corner goes that way. There are at least four 5.10 or harder cruxes. Many of the moves were done in a horizontal body position on our ascent. The hardest crux (10d?, tricky & powerful) was protected by the two smallest HB cams I had, a #0 and #00 HB micromate- similar to the smallest 2 Metolius or Alien cams. Later, as teh corners converge you will reach a 1/4"-driven angle and some fixed hardware above that might be the worst I've ever seen, Circa 1950s. No doubt this was an old aid line, but modern climbing gear can back it up. I presume this to have been the first FREE ascent of the right hand side of the line.

The grade is 'old school' and may not compare to other recently developed routes. Our ascent felt a little harder, but that was likely due to cleaning and testing suspect rock on the lead, even in the middle of the cruxes. The grade is very similar to that of Death And Transfiguration.

The hardest crux (10d, very tricky & powerful) was protected by the two smallest HB cams I had a #0 and #00 HB micromate- similar to the smallest 2 Metolius or Alien cams.

The climb is rated PG-13 for the possibility of placing pro in bad rock or having difficulty hanging out to place it. I felt safe, however, and did not feel that a fall from any given point would have been dangerous. It's just not a good intro to leading, that's all. 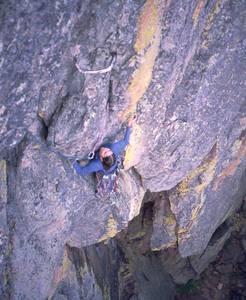 Joseffa Meir about to tunnel behind the huge fl… 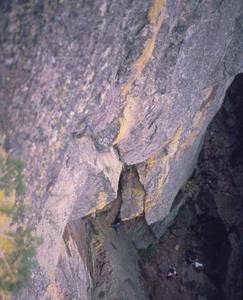 Joseffa Meir starts up following the FFA of 'Re… 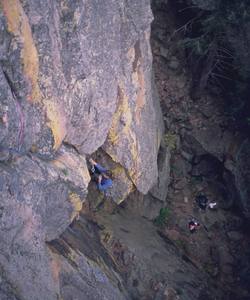 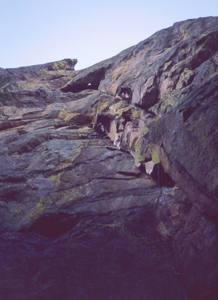 Tony Bubb on lead on the FFA of 'Real Men Don't…