Routes in Nip and Tuck

Find finger crack right behind a small aspen tree (white tree trunk) on the way up to arete/finger crack. Take short crack straight up to small ledge under roof (nice rest), go left around roof, following the crack, and follow as it angles left and the angle drops on this low angle slab.....the crack turns into a seam and peeters out, run it out for 30 feet up to a large right facing dihedral....another short but steep and sparsely protected 15 feet leads to a large and loose belay ledge (exciting). Scramble west or east to decend. 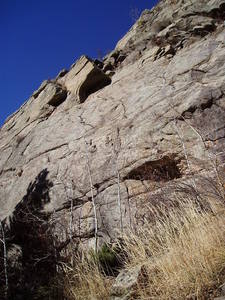 The route follows a thin crack in the center of…