Sort Routes Wrong Map Location?
Suggest Change:
Description Getting There The Rock History When to Visit Where to Stay Nearby Crags Flag Discriminatory Name Other Suggestion
Add To Page

The gem in the crown of Costa Daurada climbing, Siurana is the premiere sport climbing venue in Catalunya, and among the top destination crags in the world. The limestone cliffs surrounding the idyllic hilltop village of Siurana are known for their thin, technical lines, featuring excellent incut pockets and sharp edges. The outstanding quality of the climbing is only part of the attraction, as this is surely one of the most beautiful sport crags on the planet. The orange, blue, yellow & black streaked cliffs surround the picturesque village with its romantic cobblestone streets, narrow twisting passageways and quaint stone buildings, all perched high above the rolling vineyard & olive orchard-speckled countryside below.

Most international travelers will want to fly into the Barcelona airport, which is completely modern and easy to navigate for non-Spanish speakers. Rental cars (which are probably essentially) are available in the terminal. If you are traveling from another destination in Europe, it may also be possible to fly into the regional airport in Reus, which will reduce the drive by only 1 hour or so. If this is your first trip to Spain, a day or two in Barcelona is mandatory, so you might as well fly there anyway.

Once you have your car, follow etiher the C32 (along the coast) or the AP7/E-15 towards Tarragona. These two routes merge before Tarragona. These are both toll roads. Expect to pay around $15 for the one hour drive (or take one of the free, quaint at first but soon slow & annoying free highways). Get on the T-11 in Tarragona (following signs towards Reus), then onto the N420. After a few Kms, take a right onto the scenic C242, towards "Cornudella de Montsant". After about 20 Kms you will pass thru Cornudella. Turn right about 200yds after leaving town, on a small road signed for "Siurana". Follow the winding road for about 8 Kms to the village of Siurana.

The limestone here is truly excellent, with many unbelievable, sculpted, sinker pockets and great edges. Most of the cliffs are more or less vertical, and as such, the climbing tends to be quite technical in nature, not unlike Smith Rock, and the overhanging lines tend to be rather hard.

However, with 30 distinct crags spread around the vicinity, there is a good amount of variety, from short, burly power routes on a 45 degree overhang, to 35 meter slabs, and everything in between. While there are a few famous tufas at Sector L'Olla, these are an anomaly, so if you're looking to pinch your way to glory, the nearby cliffs of Rodellar, Margalef, or Montgrony would be a better choice. Finally, a note about grades, provided courtesy of UK hard man Rich Simpson:

"the only downside to climbing in Siurana is the somewhat stern grades. So, if you are searching for soft touches or holiday grades', then you better go elsewhere. Like Buoux, Frankenjura and Peak Limestone, Siurana is sternly graded meaning satisfaction and rewards are only achieved by those prepared to put in the effort."

Though Europians have enjoyed the magic of Siurana since the 80's, many Americans weren't introduced to these crags until Eric Pearlman's classic "Masters of Stone IV" which featured Carlos Brasco on "Bistec de Biceps" and "La Cara Que No Miente" at L'Olla, and crag patron Toni Arbones on the classic "Mr. Cheki" (5.14a), not to mention his impressive parlor tricks at the old Refugi.

Brasco was one of Spain's top climbers in the early 90's, establishing the Campi classic "L'Odi Social" in 1992 at 8c (though a broken hold has upped the grade to 8c+).

Siurana's most famous route, the epic 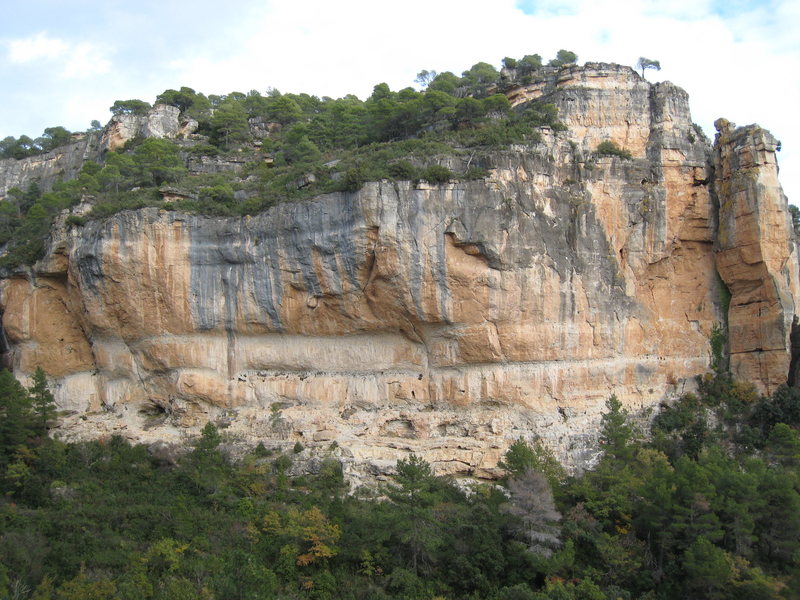 El Pati & El Cargol from La Siuranella. La Rambla (9a+) & Broadway (8c+) are at the far left. El Cargol is the section of cliff with the black streaks at the top (and the area to the right). was originally established in 1994 by Alex Huber, and given the grade 8c+ (5.14c), because, as Huber puts it, "La Rambla isn't harder than Action Directe and therefore cannot be harder than 9a. In 1995 Action Directe was given 8c+, that is why my routes such as "Weisse Rose" and "La Rambla" had to be given 8c+." In 2003, Spaniard Ramon Julian added a 20-foot extension to "La Rambla Orginal", linking to the anchor of "Reina Mora" to create "La Rambla Extension" at the impressive grade of 9a+ (5.15a). Repeats by Edu Marin, Adam Ondra, Patxi Usobiaga & Chris Sharma have confirmed the grade at modern-day 9a+ (5.15a), but this has created some contreversy over the actual difficulty of the extension. Huber asserts, "It's a fact that La Rambla increased in grade from 8c+ to 9a+. Often people believe this is due to the route extension, but in reality the difficulties do not change substantially with this extension. The difficulty in traversing from the Rambla belay rightwards to finish up "Reina Mora", compared to the crux on La Rambla, is not relevant." At least half of this confusion can be attributed to the modern consensus that Action Direct is 9a. Julian's argument for the additional letter-grade can be found here

In December 2008 Chris Sharma completed a 9a direct start to the existing 8c+/9a Estado Critico. Others have suggested "Golpe de Estado" is 9b (5.15b), though Sharma declined to propose a grade. In February 2011, prodigy Adam Ondra added the bouldery "La Capella", proposing the tentative grade of 9b.

The vast majority of cliffs at Siurana face more or less south, making this a winter destination. Most climbers visit between November and March, though shade is available if you know where to look. Siurana is only about 20 miles as the crow flies from the Mediterranean Sea, so the weather is warm year-round, and even in December climbing in the full sun can be unbearable. The sharp nature of the stone further suggests a winter visit.

Sadly, the historic Refugi that sits atop the cliffs has closed its doors due to a 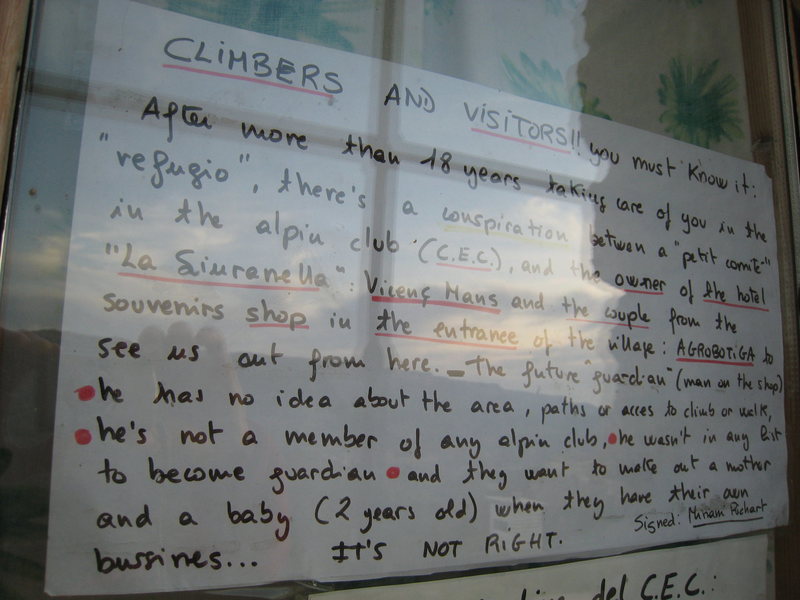 This statement, explaining the closure, was posted in the window of the Old Refugi. (Hint: "conspiration" means conspiracy) between several members of the community. 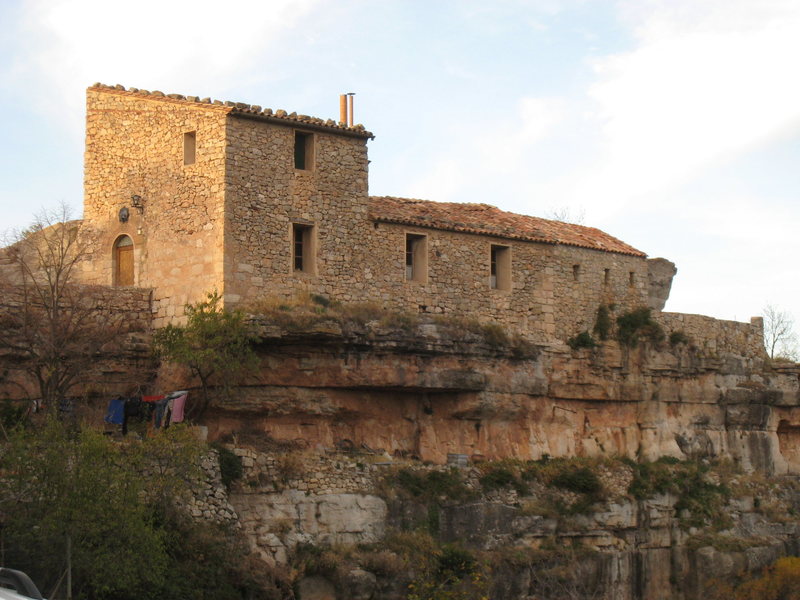 The old Refugi, currently closed due to a political dispute.

Fortunately there are a number of other options. Toni Arbones has created a new empire at Camping Siurana. Located ~1km from the village, they offer campsites, bungalows, and small, spartan rooms. They also have a nice bar/restaurant that offers good food at reasonable prices, and a nice hang, with a TV, board games and a small library. They have showers, but no hot water.

Cornudella de Montsant has a few rooms available that generally include breakfast for ~25 Euro/person/day. If camping is your thing, it appears that free camping is tolerated all along the road to Siurana. Many climbers bivy (without tents) at the Melafots cliff, under the low roof that runs along the left end of the cliff. It also seems to be acceptable to camp in your car at the castle parking lot.

The Costa Daurada region of Catalonia has an embarassment of riches when it comes to quality sport climbing venues. If you have an extra day, consider any of the following crags, no more than an hour's drive from Siurana:

Mountain Project's determination of the classic, most popular, highest rated climbing routes in this area.
More Classic Climbs in Siurana » 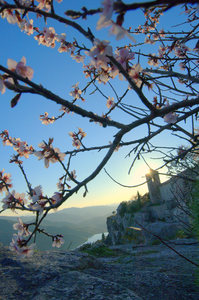 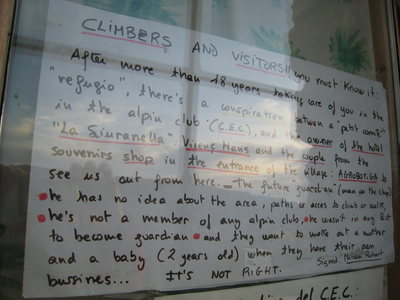 This statement, explaining the closure, was pos… 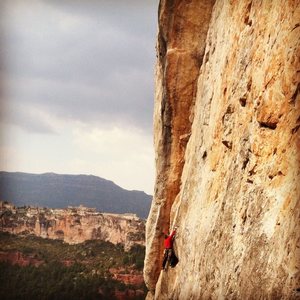 Great climbing at El Falco with Siurana in the… 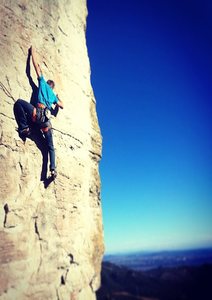 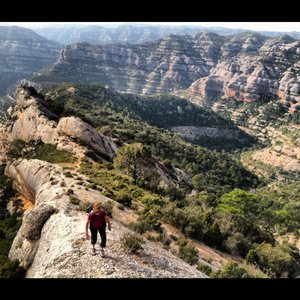 Great hiking and views on a rest day in Parc Na… 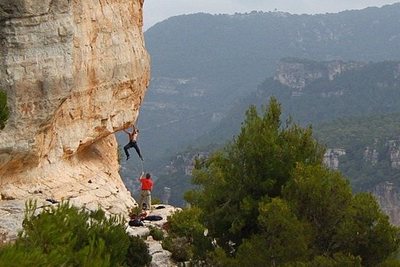 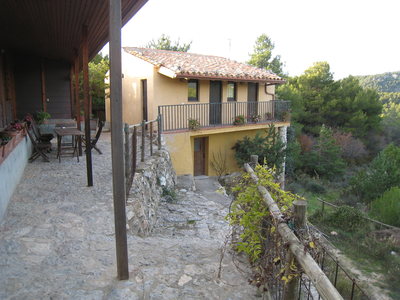 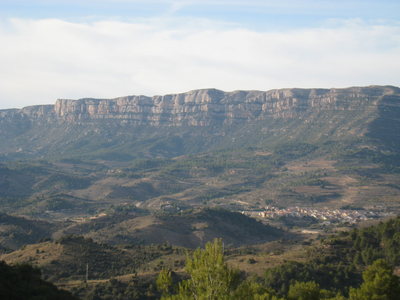 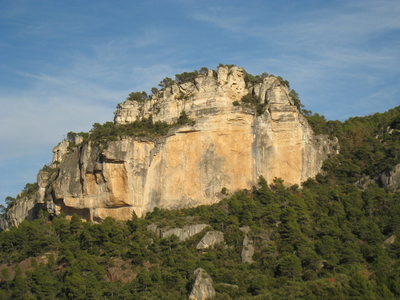 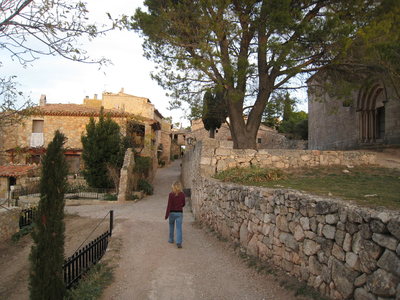 The quaint village of Siurana.

All Photos Within Siurana