Sort Routes Wrong Map Location?
Suggest Change:
Description The Rock History When to Visit Getting There Where to Stay Flag Discriminatory Name Other Suggestion
Add To Page

Nestled in a narrow canyon on the western flank of Montsant National Park lies a jumbled maze of unassuming, conglomerate cliffs surrounding the tiny village of Margalef. From the wrong perspective, these crags appear slabby, loose & covered in dark gray lichen. But upon closer inspection, these layered, bulging cliffs reveal the most recent addition to Spain's already-impressive list of world-class sport climbing destinations. This newly recognized international destination receives steady traffic from European & British climbers throughout the winter months, and as climbing tastes evolve, it appears that the relatively steep & juggy conglomerate tufa of Margalef will soon wrest the title of Costa Daurada's top winter destination from the relatively thin & slabby limestone of Siurana.

The rock here is primarily cobblestone conglomerate, not unlike the cliffs of El Rito, NM, Maple Canyon, UT, or Castlewood Canyon, CO. However, what sets this remarkable crag apart is an amazing layer of limestone tufa that coats many of the cliffs. This coating serves to harden the surface of the cobblestone matrix, while at the same time providing some routes with impressive curtains of tufas. The combination results in one of the most unique, and enjoyable climbing surfaces on the planet. Unlike some other cobble crags, knob climbing is the exception. Most of the routes climb on good pockets, though most will require some edging and crimping. The cobbles are generally much smaller (rarely larger than golf-ball-sixed) than those found at 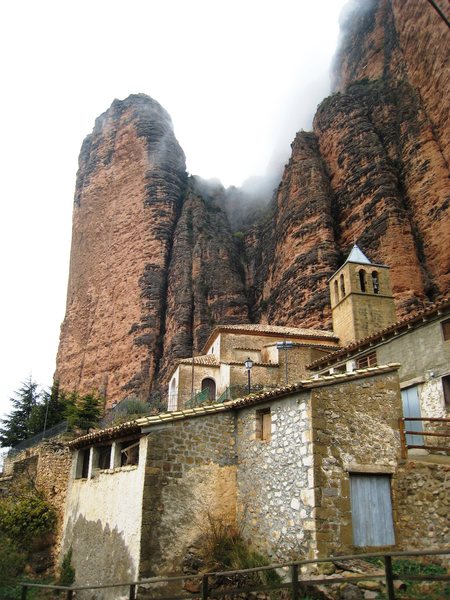 The tiny village of Riglos features enormous walls of large, orange cobbles, with routes up to 10 pitches long. or Maple Canyon, so you can thankfully leave your kneepads & duct tape at home. 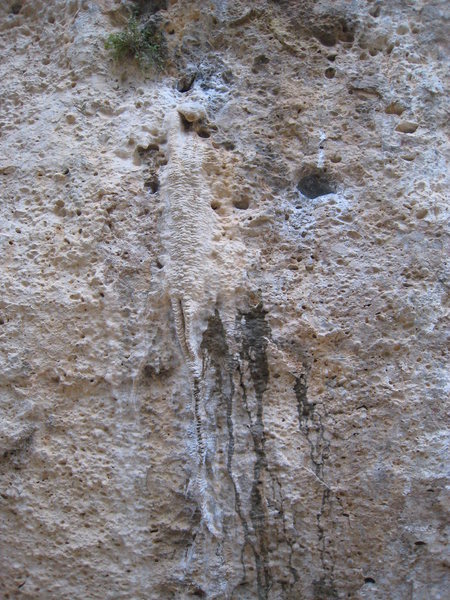 The rock at Margalef is an unusual combination of cobblestone conglomerate and tufa limestone. 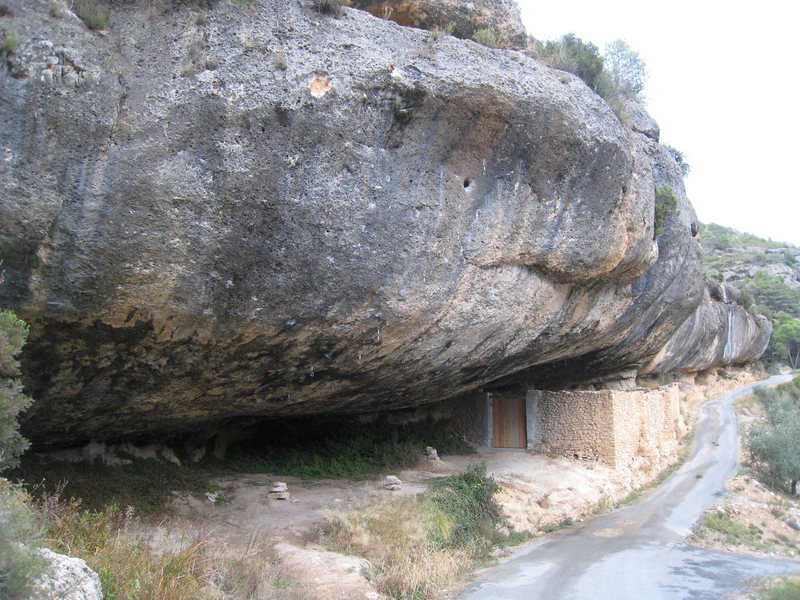 El Laboratori is home to some of Margalef's most difficult routes, mostly STEEP & bouldery. At center (left of the brown streak with the big hole) is Darwin Dixit, 5.14a, onsighted by Sharma & [[free-soloed by Dave Mcleod]]davemacleod.blogspot.com/20…. Vertical walls, slightly overhanging tufa pinching, 45 degree overhangs that go on for ever--all within a short drive from town. Another unique attribute of this crag is the relative proximity of routes for all appetites. For example, at El Laboratori, its possible to work a 9b project literally no more than 30 feet (as the crow flies) from well-bolted 5.6 slabs on the 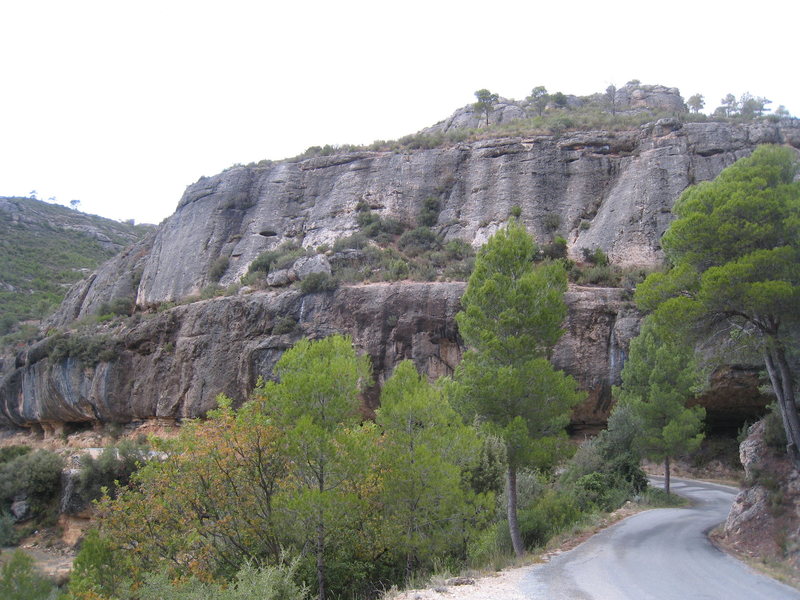 Can Llepafils (above) and the far right end of El Laboratori (below & obscured by trees. cliffline immediately above. At Finestra, one of the best 5.11 sport routes on the planet sits no more than 100 feet from a wall with no less than nine 5.14 (or harder) sport climbs! Additionally, route lengths very quite a bit (up to ~35 meter pitches), so its possible for both power-junkies & enduro-fiends to find world class routes to push their limits.

Although local sport climbers have visited these cliffs since the mid 1990's, the magnificent potential of this compact area was only revealed in 2006, when several of the world's best sport climbers arrived on the scene to leave their mark. What ensued was an onslaught of difficult redpoints & onsights likely unmatched in the history of our sport. Thanks to the tireless equipping efforts of local crag patron Jordi Pou, the likes of Ramon Julian, Dani Andrada, & Chris Shama (to name only a few) have combined to establish a collection of 35 routes graded 8b+ (5.14a) or harder, not including an additional 30 or so open projects in the 8c - 9b range.

Some memorable events of the last several years include:

The maze-like nature of the cliffline provides cliffs of all aspects to suit the day's weather. Its even possible to climb in the rain here. However, since most of the cliffs have rounded lips that slab out, water runs down the faces pretty quickly, so your selection of routes will be quite limited if you intend to go to the anchors. If your agenda requires only a steep wall to work out moves, there will be plenty of options on even the wettest days. There appears to be no bias towards sun or shade here, as several of the best crags (Tenebres, Finestra, Cova Soleida) receive nearly all day shade, and several of the best (Espadelles,

El Laboratori is home to some of Margalef's most difficult routes, mostly STEEP & bouldery. At center (left of the brown streak with the big hole) is Darwin Dixit, 5.14a, onsighted by Sharma & [[free-soloed by Dave Mcleod]]davemacleod.blogspot.com/20…. 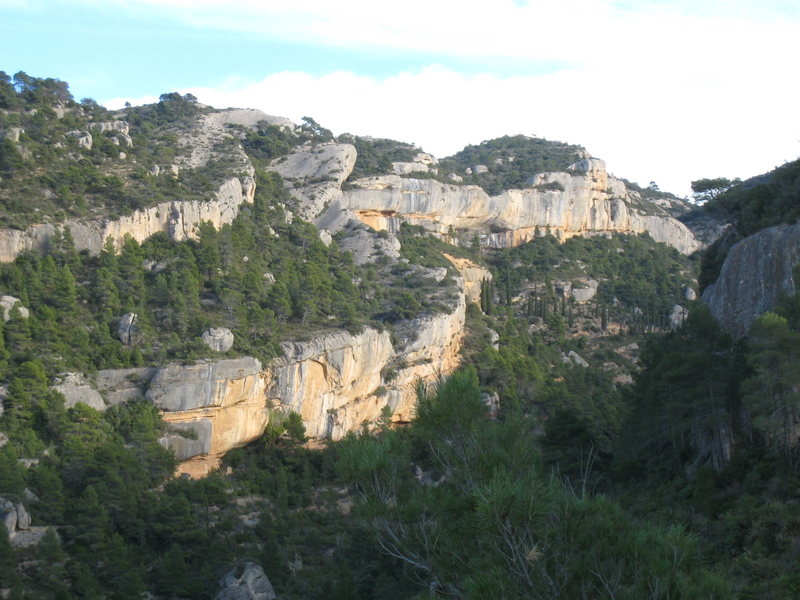 The Ermita & Cabernet cliffs have some of Margalef's best routes. ) receive nearly all day sun.

Considering the climate, this is primarily a Fall-Winter-Spring destination. Even the shaded cliffs can be climbable in December on a warm day. This is a popular winter destination for many European climbers, and a quick survey of the first ascent history shows that nearly all of the difficult climbing happens here between late October & early March, with a heavy bias towards December & February.

Most international travelers will want to fly into the Barcelona airport, which is completely modern and easy to navigate for non-Spanish speakers. Rental cars (which are probably essentially) are available in the terminal. If you are traveling from another destination in Europe, it may also be possible to fly into the regional airport in Reus, which will reduce the drive by only 1 hour or so. If this is your first trip to Spain, a day or two in Barcelona is mandatory, so you might as well fly there anyway.

Once you have your car, follow etiher the C32 (along the coast) or the AP7/E-15 towards Tarragona. These two routes merge before Tarragona. These are both toll roads. Expect to pay around $15 for the one hour drive (or take one of the free, quaint at first but soon slow & annoying free highways). Get on the T-11 in Tarragona (following signs towards Reus), then onto the N420. After a few Kms, there are two options, to head North or South of Montsant National Park to reach Margalef, which lies on the opposite side. For the Northern route, take the C242 towards "Cornudella de Montsant", passing by the Arboli, Siurana, & Montsant cliffs along the way. After ~50K's, go left on T713 and follow this for ~9K's to Margalef. The Southern option is to stay on the N420 for another 20K's or so, then follow any number of twisty roads North to Margalef. One such route is to follow the T710 North to La Vilella Baixa, then go left onto the T702, and follow this to La Bisbal de Falset, where you go right onto the T713 and another 5K's to Margalef.

There are two main groupings of crags, one set directly east of town up the narrow canyon that leads to the "Ermita Sant Salvador" shrine. The other, larger area is located ~1.5km north of Margalef, along the large winding canyon of the Margalef "Embassent" (reservoir).

There are several options for accomodation:

The most popular option is the 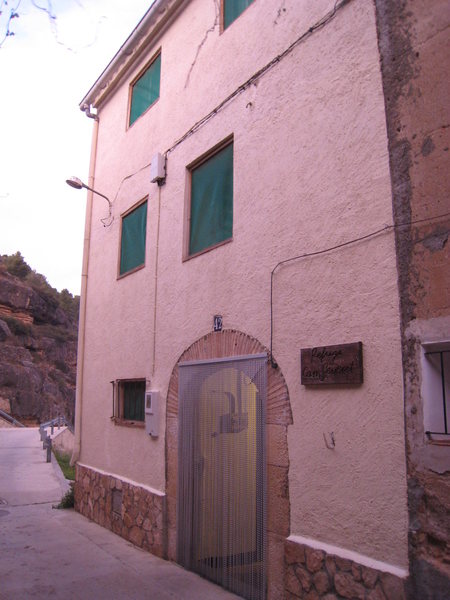 The Can Severet Refugi is the most modestly priced receptical for your stinky remains. owned & operated by legendary local route developer & guidebook author Jordi Pou. Mr. Pou is an extremely gracious host, quiet, thoughtful & romantic. His ode to Margalef (found in the intro to the guidebook) is a work of art that will touch the soul of all true climbing fanatics. He speaks very little english so some Spanish competency will be helpful. You may see him at the crag bolting projects for Chris & Dani.

Located near the top of the hill in the town of Margalef, the Refugi is a crowded little house, with three-stories approximately 20' by 20' in size. Remarkably this tiny space boasts room for more than 30 climbers, at 8 Euro per night in Dec 09, including free wifi & hot showers. The downstairs holds the small bathroom & shower with a surprisingly large supply of hot water. 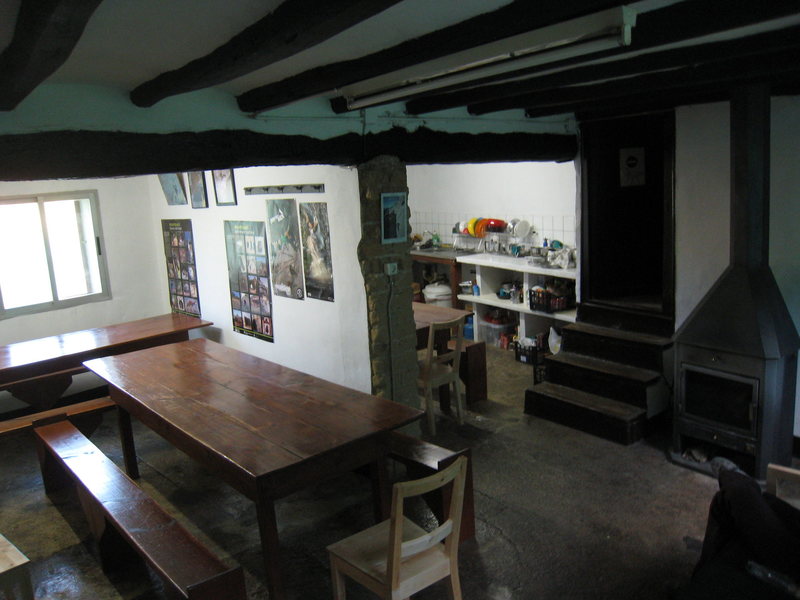 The refugi cooking/hang out area. is the main hang, with beautiful climbing murals, photos of the best routes at Margalef, couches, tables, racks of magazines and a small cooking area with running cold water and no stove. The 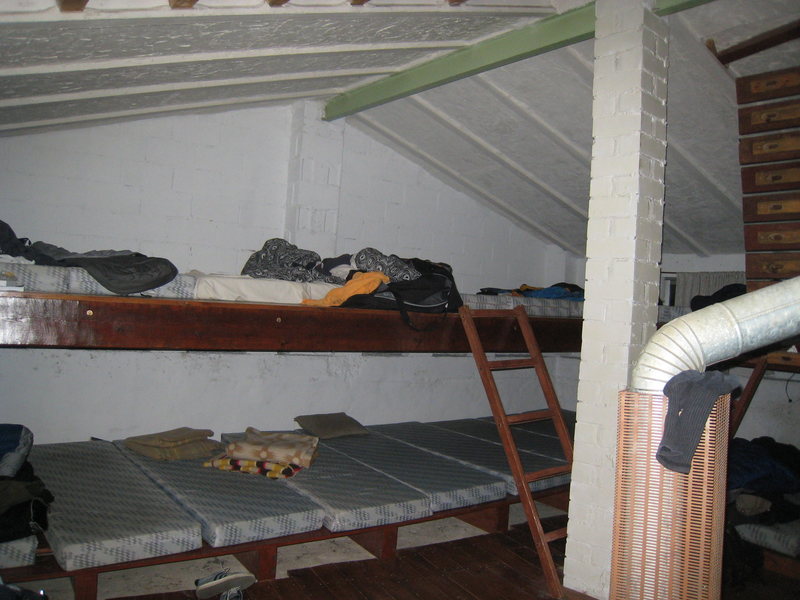 The sleeping level, an incubus of viral plague. are fully third-world. There are ~30 mattress, laid side-to-side, on two levels. Be sure your vaccinations are up to date before you check in, and if you have even the least trouble sleeping, consider other options. Many of the visitors here were extremely obnoxious, loud, and completely disrespectful of obvious quiet times or quiet areas. If you require sleep, look elsewhere. You can buy a shower here for a couple Euros. The real advantage of this place is the cooking & hang out area on the mid level that makes the long winter nights way more enjoyable.

There is free camping at the base of the damn, though it appeared people were camping all along the damn road with no issues. Presumably this is quieter than the Refugi. There is a free water font in Margelef at the SE corner of the church.

There are at least two other upscale options. The Tres Pines quoted a price of 30 Euro per person per night. Must be pretty nice for that price!

Margalef has a small cafe, a nicer-looking restaurant, and a very meager market at the NE corner of the church. The Refugi sells basic necessities (liquor & cookies).

Mountain Project's determination of the classic, most popular, highest rated climbing routes in this area.
More Classic Climbs in Margalef » 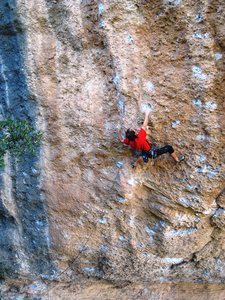 Enjoying the beautiful cobblestone of Margalef,… 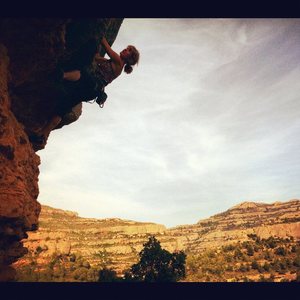 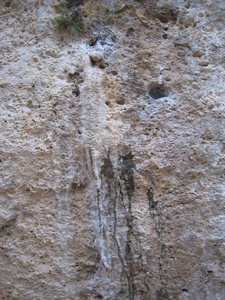 The rock at Margalef is an unusual combination… 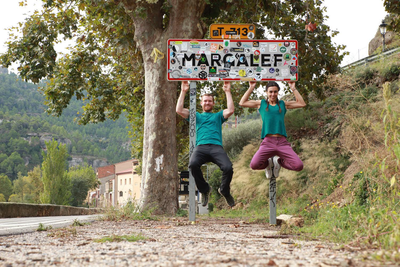 Visiting Margalef with Debbie for the first time 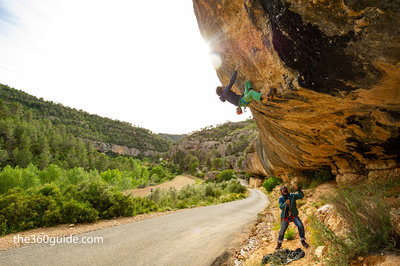 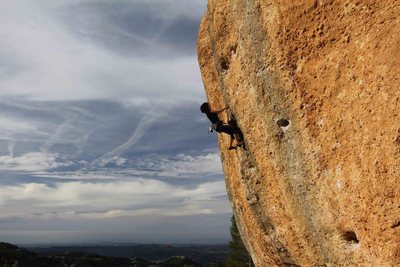 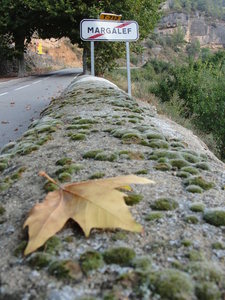 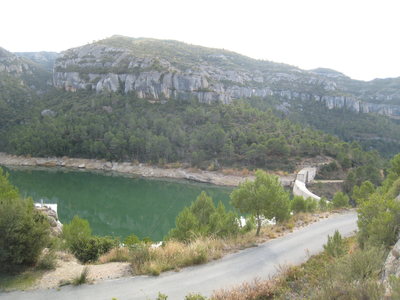 The "Embassement". There is free camping below… 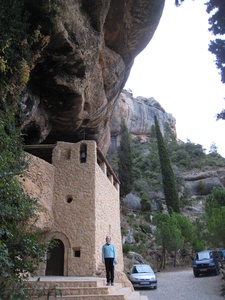 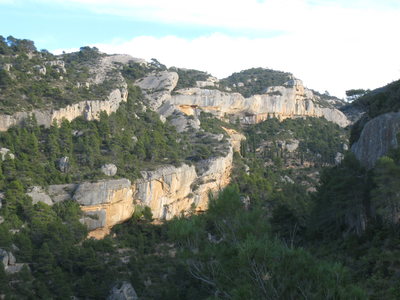 The Ermita & Cabernet cliffs have some of Marga… 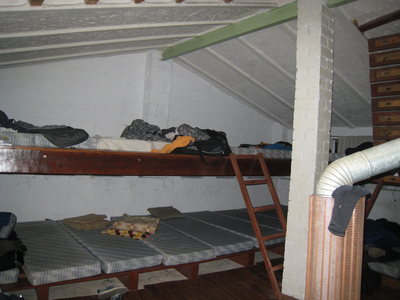 The sleeping level, an incubus of viral plague. 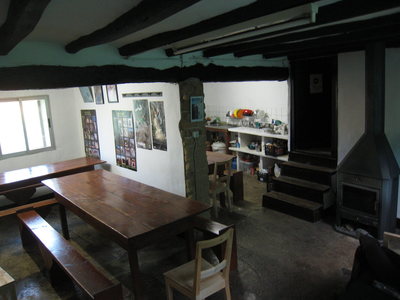 The refugi cooking/hang out area.

All Photos Within Margalef