This beastly power route is among the most classic routes at Siurana, and according to 8a.nu, it is THE most popular (at least it appears on more scorecards than any other). The business is no more than 10 feet of difficult cranking, but it packs quite a punch in those 10 feet. How can such a short route be so classic? The rock is excellent, the moves are fun, and believe it or not, this is one of the longest routes at this sector, which has some of the best rock anywhere.

Reach for the horizontal break, or make one easy move if you're short. Grab the obvious 2-finger pocket, then make a big move to another pocket near the 2nd bolt. Another hard move leads to another pocket, and oh ya, try to clip the 2nd bolt without decking somehwere in there. Slap for the obvious diagonal edge, then gun for the next horizontal and a good shake. Big holds lead up onto the slab, where more tricky moves wait to pilfer your send.

Fans of the ¨Masters of Stone¨ video series will recall footage in the fourth edition of Spanish hard-man Carlos Brasco in ridiculously European shorts hanging hands-free from his toes at the second horizontal break on this route.

Bistec is the furthest right of the really steep routes, on the right end of the impressive overhanging cirque. It is the 2nd route left of Valga'm... and the fourth route right of the rightmost tufa route, "La Cara Que No Miente". It is also immediately right of "Ya Os Vale". 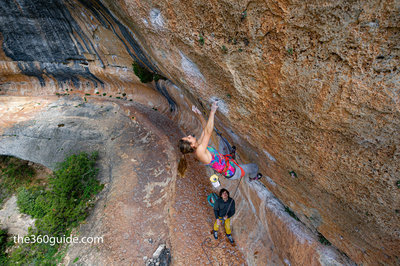 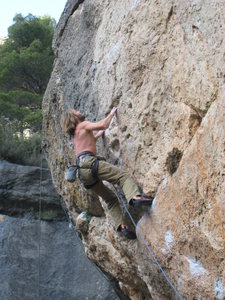 After a great rest, good pockets lead up to the… 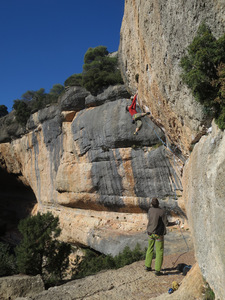 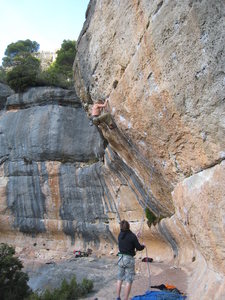 A German climber struggles to rest after the en…