The large metamorphic granite, gneiss, and quartz monzonite walls that make up the heart of Unaweep Canyon are a unique resource for climbers in western Colorado. Indeed the canyon often feels like an island of metamorphic rock in the heart of an area known for its sandstone climbs. The cliffs range in height from about 150 to over 900 feet tall. Excellent traditional crack climbing abounds in Unaweep, although an increasing number of bolt protected and mixed protection routes have been established in recent years.

The highest concentration of excellent crack climbs exist on Quarry Wall, Hidden Valley Wall, and Fortress Wall. The Mother's Buttress area contains an exceptional concentration of classic crack and face routes on a large swath of excellent stone. Sunday Wall also has a good collection of face routes and traditional crack climbs. Beyond these areas there are many hidden, less visited classics in the canyon awaiting those with an adventurous spirit.

The history of climbing in Unaweep has largely been lost to time. The only evidence of the earliest ascents in the canyon are the occasional bits of hemp rope or rusty pitons that are sometimes encountered.

Per Kris Hjelle: Eric Reynolds' name as an innovator should not be omitted from the history of climbing in Unaweep. In the mid-'70s, he and Dave Huntley (co-founders of Marmot along with Tom Boyce) put up the first named routes on Mothers Buttress, and KC Baum's guidebook does credit them with these early routes (including Titus Groan). Although they didn't put up a multitude of routes that were recorded, the efforts of Eric, Dave, and others were essential to the modern era of Unaweep rock climbing.

The modern climbing history of Unaweep starts in the late 1970s when a strong climber by the name of Andy Petefish moved to Grand junction, and almost overnight brought free climbing standards into the modern era. Indeed, some of the hardest routes in the canyon to this day were completed by Petefish and friends in the '80s or early '90s. Unfortunately, no complete record of the climbs done by this talented climber exists.

Another motivated climber whose name is synonymous with Unaweep Canyon is KC Baum. Baum moved to Grand Junction in the late '80s and quickly established himself as a first ascent juggernaut. Baum's 1992 guide, later published in a 1997 second edition, is still the only published guidebook to the area. Researching his first ascents in this guide, it is clear that he established most of the classic routes in the canyon, often at a blistering pace: think several per week, or even per day.

Since the mid-1990s climbs have continued to be developed in Unaweep Canyon at a steady, if not rushed pace. Many of the currently active first ascentionists have begun posting their routes in this database. Many others have not. Many climbers from outside of the Junction area have discovered the first ascent possibility of Unaweep, and as such no complete record, or dialogue of recent first ascents exists. In addition to this, the reclusive hard man Jim Beyer has established many routes in the canyon that have gone unreported (if you're ever climbing along clipping copper heads on a route that looked like it might be fully bolt protected from the ground, think of Beyer).

The metamorphic rock that makes up the heart of Unaweep is some of the oldest in the state. It is dated between 1.4 and 1.7 billion years old. The makeup of the rock is also very complex. The majority of the rock is low grade, metamorphic granite and gneiss. However there are many intrusions of other rock types. The most obvious being intrusions of quartz monzonite and pegmatites. Unaweep's "granite" is technically considered to be the same basement rock formation that makes up the Black Canyon, although the climbing experience is quite different. The complex, jumbled geology of Unaweep is often painfully clear to the rock climber, who might be climbing along on amazing solid rock at one moment, only to encounter blocky, loose rock the next.

Many of the cliffs on the south side of CO-141 are on BLM land. Unfortunately, the majority of the land in the bottom of the canyon is privately owned, barring easy legal access to these cliffs. The majority of cliffs on the north side of the highway are on private land. Although several of these cliffs are owned by climbing non-profit organizations, climbers, or sympathetic land owners it is prudent to be inconspicuous and polite while visiting these cliffs. The bottom line is that you are on private property of one form or another. A few cliffs have direct access via BLM land to cliffs on BLM land, these include: Quarry Wall, and Mighty Mouse Wall.

From Grand Junction, Colorado. Head south out of town on US-50, towards Montrose and Delta. After traveling about 9 miles south of Grand Junction, turn right on CO-141, toward Gateway. This intersection is located in the small town of Whitewater.

Follow CO-141 past Nine Mile Hill, and continue for a few more miles. After traveling about 13 miles on CO-141 the Granite walls will appear. Quarry Wall is the first obvious large wall on the left. There is a turn off for Divide Road (look for a Forest Service access sign) just below Quarry Wall. Many crags have their driving distances measured from the intersection of CO-141 and Divide Road. 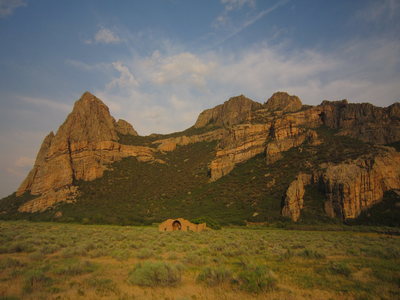 Unaweep has some nice scenery as well as good c… 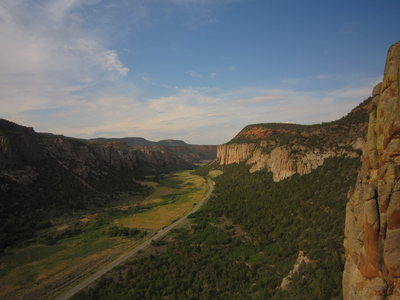 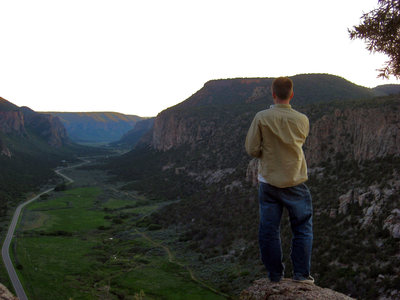 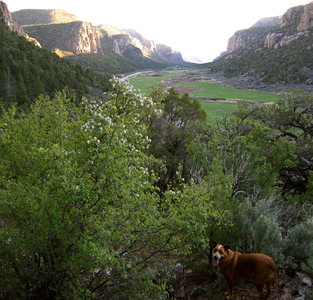 Near the base of "Rites of Passage," Quarry Wall.