Mount Webster slabs are becoming frequently climbed and possibly through the Access Fund and NHFS there can be a trail established with proper painted marks to the cascade that is all rock slab and some rocks that bring a person .25 mile to the river and then the woods are terrible thick pine, Going a distance south from here to the parking lot would be the only section where tree cutting of branches mostly would be required. Today climbing parties for what ever reason must descend in the dark or injured are at risk to their welfare. It won't be much effort to make a climbers trail this way. Presently climbers are approaching from several different directions. Rescue services may not know the best direction to rescue a injured person either and getting a the person/s down would be challenging and this slab I believe is not Helicopter accessible.

Crawford Notch has four main climbing areas.
1. Mt. Willard- is at 1900ft elevation. The granite cliff of it, goes to the top of Willard overlooking the entire Notch. 300ft slabs on the right side steeper higher rated climbs. Some of these might have 30yr old bolts.
There's a 200ft erosion rotten head wall directly above the slabs. The head wall is avoidable by the tree ledge below it and a short steep slab wall on the right or northern side of the tree ledge. I remember these short slabs getting bolted routes on them. I'm not sure. From the right side up is the way to the top of the cliff that is the mountain's summit also. Hike the trail 2 miles to the Crawford House. Mt. Willard is already listed as a separate area

2. Mt. Webster- is at 3910ft granite/composite rock mountain. High enough that weather can become an issue. Avoid issues by having proper clothing and enough water. Webster flanks the northeastern side to eastern side of the notch. It used to be known as Notch Mountain. It's summit ridge is a long ways 3+ miles in either direction up to and across from the tops. Climbers can come out to the trail that will bring you back to 302. Sometimes climbers can rappel and sometimes climbers will find their way down after dark or in retreat from bad weather.
It has on it's northeastern area a southwestern facing slab, All except maybe the farthest west on this giant slab is of the lowest grade difficulty (5-0-2) for 800ft. Above it is a mostly unexplored amphitheater, below that is a steeper unexplored slab. The wall is 100 to 200+ft in height. Right of this and above it the trail comes to a long scree field gully that goes directly down the mountain a long ways. Below it are steep 100ft+ slabs (I have not been there). Southwest or right from this is the 600ft west facing central slabs. The easiest accessed area across from Willey's Slide. This slab longest section is the stream bed that led you up to the slabs. At this point reached, detour around the waterfall slab section in front of you, it is the ending of the 800ft stream down the rock slab below the summit head wall. The waterfall 800ft slab is smooth as marble. Above this and another falls the waterfall slab section of Webster can be safely traversed until the cliffs 30-120ft and buttressed ledges (300ft+ of granite) are located. Where the rock has been exposed to the most weathering on the buttress faces it is deteriorated of feldspar.
A scree rock field is below the ledges, formed at the top of the waterfall slab. Head west or right to the next buttress. And right of this buttress are two more. Above and below this scree field, climbing on these cliffs would begin. Many choices of where to start to where to finish. Many short and some are 3+ pitches long, all are serious alpine undertakings. The buttresses tops can be to more rock cliffs, ledges, slabs, domes finishes to the summits. All the summits have the trail nearby. Traversing the length of the gully's edge can be the finish to some ridge climbs. These inside walls are very steep between buttresses. About 120+ft at the highest peak and lowest 30ft near the end of the gullies that is highest up on the mountain. Until the end, getting to the summit should be by rock. The forest is severely weathered birch, pine and hemlock and difficult to move through.
Have an outing on it, bag something new at grade five on this peak or Mt. Range. All Webster slabs have outcroppings of rock and more slabs/walls including the rock gullies having head walls, those will meet a climber with much wetness on their bodies. Above any of the buttresses on the Mt., besides Shoe String Buttress they'll likely be more rock to do after the buttresses are done. The next gully southeast separated vastly from these buttresses is called Avalanche gully. It's ridge of giant boulder like rocks piled up as it's head wall, may have the easiest exposed climbing on it. I haven't been there for rock climbing. Furthest I know of as rock climbing is past this gully southeast. This is called, Shoe String Gully. It's buttress has a rock climb up it all the way to the trail.
Webster has been a highly explored mt. for it's ice and snow gullies. As much as I know the shadow making head walls to these gullies, haven't been explored, too exploit. To anyone wanting to get to know them, always the long alpine approach, before the highest head wall rock bands will be reached.
To get to these sections: Park at the Willey House parking lot and cross the Saco River by a bridge at the Willey's House. Or cross where ever, the Saco River, usually isn't deep. Head uphill left, west and diagonally up to the central slabs that are directly across from Willey's slide. Eventually you should reach the stream bed that is from the base of the slabs water fall. Look for a path east or left of the falls or find your way bushwhacking 100ft to the dry tongue of the slab right or left from the falls.
Climbers have only begun to scratch or bolt the surface for what is on these slabs to climb.
The furthest east or southwestern facing slabs might have a car pullout close to them that can be utilized, the same goes for Avalanche and Shoe String Gullies because they all are not near to the Willey's House parking area.

3.Frankenstein Cliffs 1441ft elevation western side of notch 200+ft wall of granite composite rock east facing wall on the right side it has very steep ramps, corners and cracks to climb and it highest section is about 150ft.

4. Furthest west leaving the notch is an outcropping of granite southeast facing on the northeastern side or on the other side of the Saco, now a torrent river. There are several daring extremely difficult ceiling cracks to climb here.
Most of the climbing descriptions can be found in climbing guide books to the North Conway, Mount Washington area for Willard, Frankenstein and the cliffs opposite Frankenstein at the western end of the notch. None of Webster Mt. rock climbing is listed.
Crawford Notch is a very popular winter climbing area.

The Notch is on Route 302. It can be gotten to by Interstate 93 to route 3 to route 302 or by heading north to 302 or heading northwest to 302 from North Conway on rural roads. Going Bear Notch Road from the Kancamagus Highway is the most scenic and the longest way to get there. 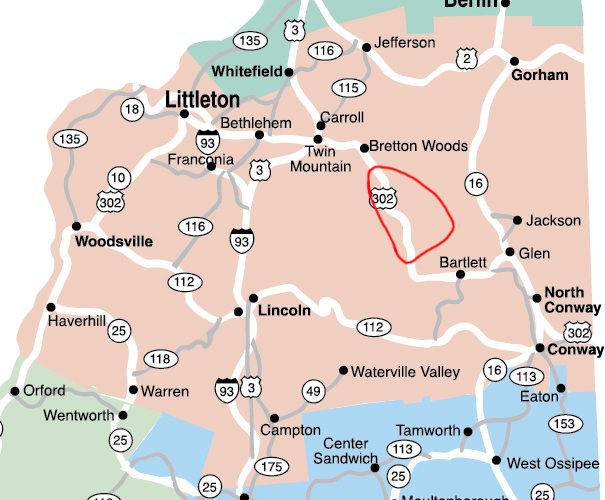 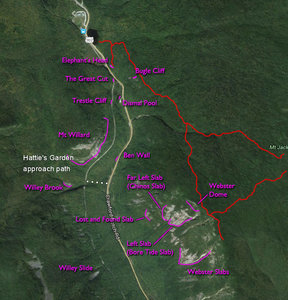 With the recent flurry of Crawford Notch submis… 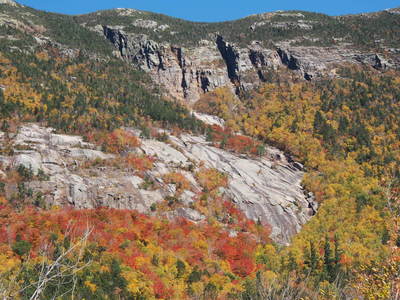 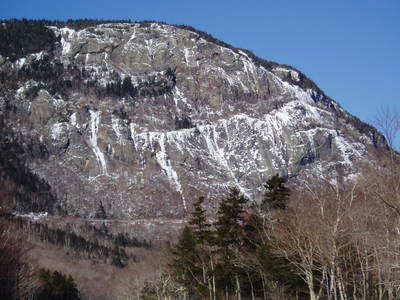 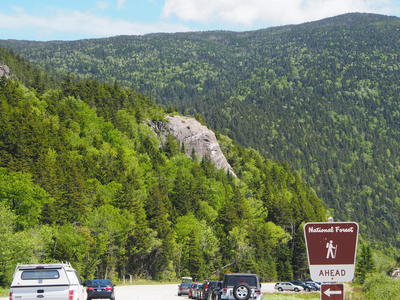 Elephant Head at the top of the notch 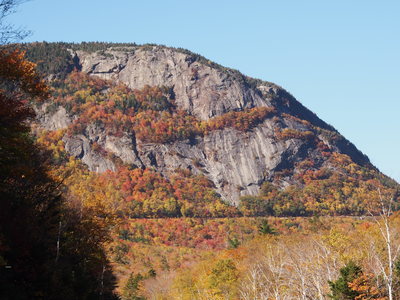 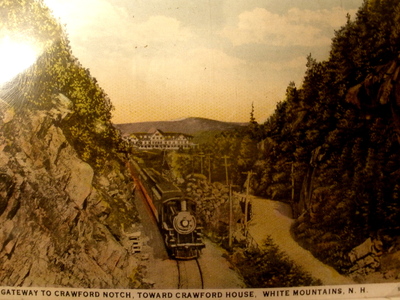 what routes are on this particular slab? Lost i… 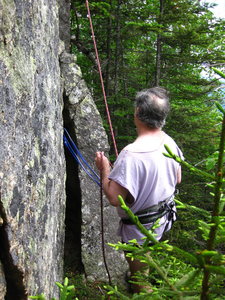 All Photos Within WM: Crawford Notch