Hugo's is a new take on an older nebulous line that was originally done by Hugo Stadmuller. Locate the prominent toe of rock that falls just shy of the rr tracks and hike up hill, at the toe of the cliff you will see the wet streak that is the winter route cinema gully, walk climbers right about 25 feet uphill until you see a bolt on a slab.

[Alternately, if it's dry, start at the very toe of the cliff and work up the gully a bit before stepping right onto the slab below the first bolt [photo];....or just clip the first bolt with a long runner and continue up the gully for the easiest start.]

1. climb a very easy slab to a tree ledge passing a couple bolts low on the route.180 ft 5.3-5.4  [Admin. NOTE: The easier climbing is in the slightly broken gully to the left of the slab with bolts. Directly up past the bolts on the arete of the clean slab is more difficult; about 5.7, give-or-take. R. Hall]

2. behind the tree ledge there is a small but short head wall, climb this on gear and meander your way up the slab above to a 2-bolt anchor. 160 ft 5.5-5.6 depending on your ability to pick the easiest path

3. [photos] follow a slab to some steeper overlaps and shallow corners picking the path of cleanest rock and following bolts and the occasional gear placement. Crux is about 1/2 up this pitch.160 ft 5.6 -5.7 PG-13/R.   [beta- don't waste time looking for gear pro at the crux, there isn't any.]

4. climb steeper rock again following bolts to a couple tricky but well protected moves to the top of the lower tier. 160 ft 5.5-5.6

[ I believe that shortly after this pitch starts there is a steeper yellow-rock slab. The easier way is to the left on dark rock. Directly up the yellow slab is harder, 5.7 - 5.7+ and probably “R” as the one crack is pretty sketchy for pro and if you "blow it" there would be "many bounces".  R Hall NH Admin]

DESCENT- Rap the route with two 60M ropes. It is possible to JUST make it with a 60M and a 50M "pull down", but you'll have to drop straight down/rappeller's right-ish on the last rap towards the base of Time Traveler.

One way to the big tree ledge and the upper slabs is to traverse right, clip one of the bolts of the top anchor for "Time Space Continum", continue right and then up some brushed ( 2015) footholds to the bushes and trees on the right. Then a half-pitch of "Class 3.9" leaves and bushes gets one to the path along the upper tier. WATCH for lose rocks just laying on the leaves!

This route is a fine example of the term "mixed" there are bolts just when you need them and gear in any spot that it could be placed naturally.

There are two bolt anchors at all the pitches except for the first pitch (tree ledge with slings). 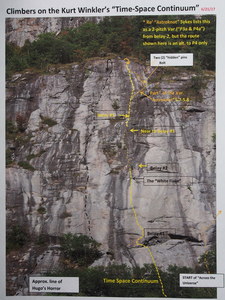 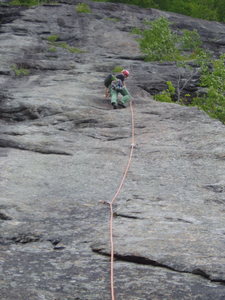 At the bolt just above the hardest "unavoidable… 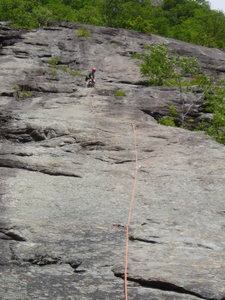 At the P3 belay on Hugo's 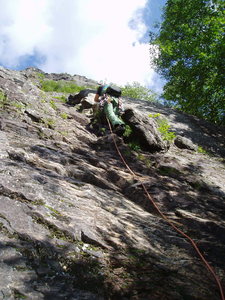 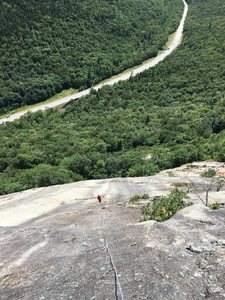 Sunny morning up willard, at the 3rd belay ledge.