Routes in 02. Gulley No.1 Buttress

NOTICE- On 5/16/21 nothing short of a miracle occurred at the base in the area between Hattie's Garden and First Shot. Two of us, together with 3 packs and 2 ropes were organizing to leave when two very large rocks/small boulders (each about 1 ft x 1 ft x 1 1/2 ft ) came crashing down at the same time. The rockfall was totally spontaneous...no people above, no rain, no thunder...nothing.  A hit would have meant death, no question. One of us was missed by both rocks by about only a foot to 18 inches, and I was missed by one of the rocks by about 2 ft. The whole thing was witnessed by our third member, who was changed shoes over by Part the Sea. Not only was no one hit, packs, gear and ropes were also spared. If you climb here it is perhaps best not to establish "base camp" on the rocks by Hattie's Garden....those nice flat rocks to sit on came from above! RH 5/17/21

Have you just finished one of the slab routes on Willard's Main Slab and it's too early to quit, but too late to do another 4-pitch route-and-rap? From the tracks at the base of "Cinema", walk south along the RR tracks about 5 min to the path up to Number 1 Buttress and tag one or two of the routes there! (Walking south keep an eye out for the cairn on the right; if you miss it you'll come to the 8" drain-ditch through the tracks about 30-40 RR ties south (beyond) the cairn and path.)

NOTE on SORTING ROUTES- The normal "path" from the RR tracks ends at the far right of the buttress at the climb "First Shot", so in walking along the base the climbs are encountered in a furthest-RIGHT-to-LEFT order.

A somewhat steep, but short approach from the RR tracks rewards the climber with an interesting cliff. Quite different from the slab routes on the main slab of Willard. Routes are moderate and some fairly well protected. If desired, the "R" and "X" routes (or at least their most interesting portions) can be TR'd (after leading one of the 5.6 - 5.7 routes) with a little ingenuity, 2 ropes and long slings.

With "Gunkswest"'s contributions, I think that most of the known routes are now listed herein. This crag was covered in the long-out-of-print 2nd edition (not the 3rd, which covers only the Eastern White Mts.) of Ed Webster's White Mt. Guide.

Park on Rt 302 at a gravel pullout (room for a 1/2 dozen cars) on the left side (going "up-notch" from Bartlett) off the road about a half mile above the Willey Slide pullout (coming from the south/east) or 1 1/2 miles below the AMC's Highland house. (From the north/west). Coming from the South/East this pull-out is JUST before the Saco Rivers crosses underneath Rt 302, and just beyond where 302 crosses over a smaller stream. A rocky logging-road starts from the rear of the parking, but quickly turns into a trail. Hike up the well-cairned trail to the actual "Hattie's Garden". (about 10-15 min and quicker than walking in the RR tracks from the Notch).

Now walk about 1 or 2 minutes "Up-Tracks" (towards the cliff) to the first little (8-inch) drainage channel through the tracks. Go about 30-40 more RR ties, and look for a cairn and steep climber's path up to the base. Keep your eyes open for the path (once really indistinct, now getting much better) and occasional flagging tape.

Mountain Project's determination of the classic, most popular, highest rated climbing routes in this area.
More Classic Climbs in Gulley No.1 Buttress » 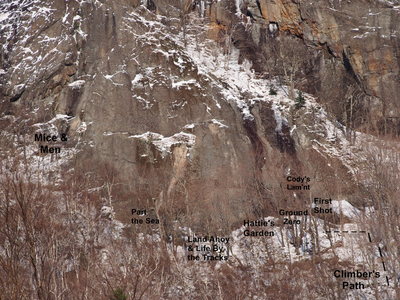 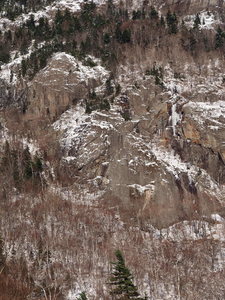 No.1 Buttress, and Hidden Buttress (Up and left) 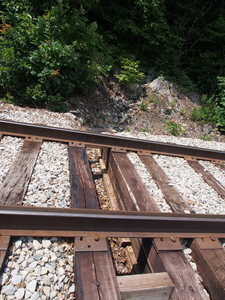 The 8" drainage ditch through the tracks.…

All Photos Within Gulley No.1 Buttress


More About Gulley No.1 Buttress